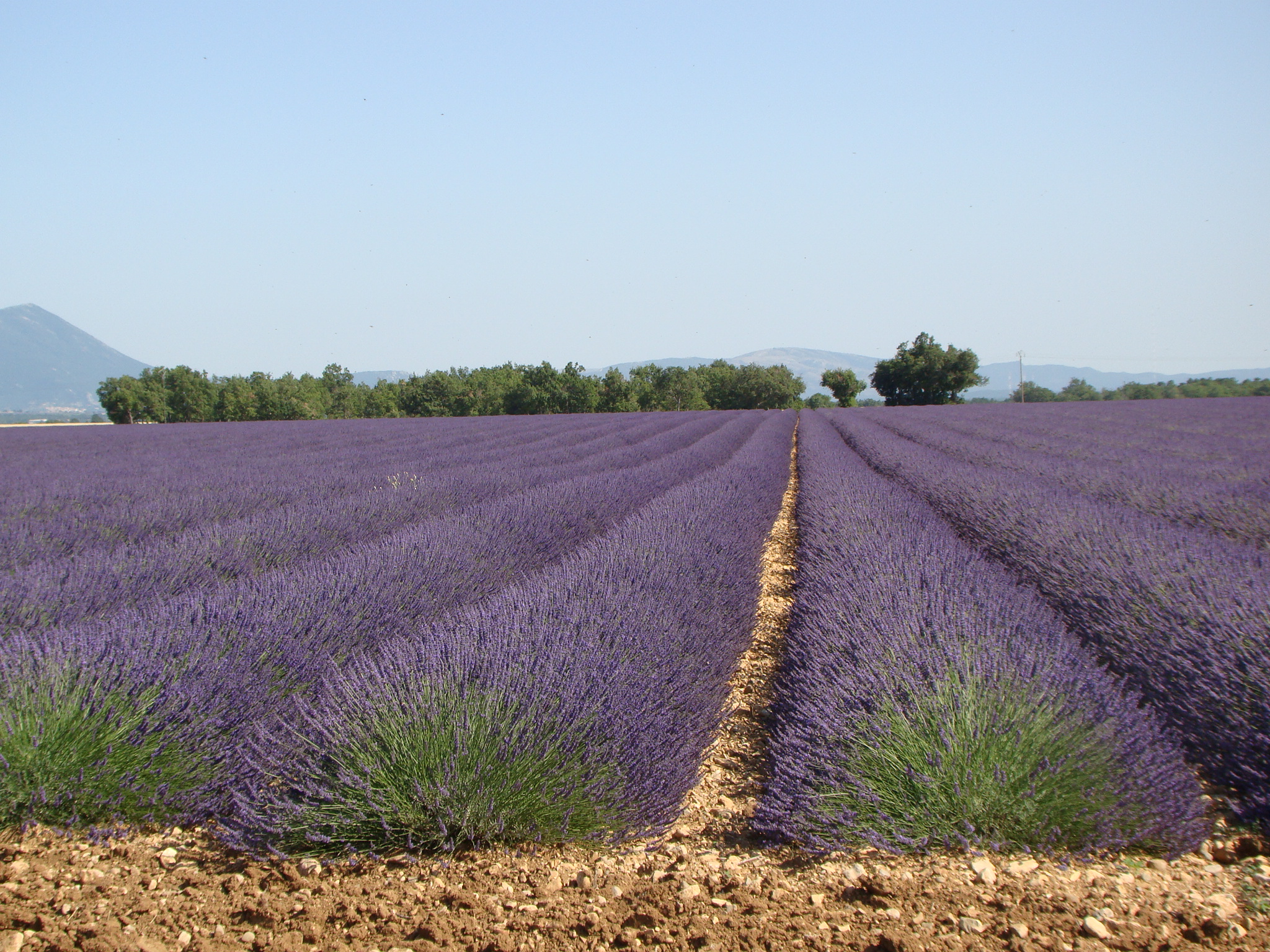 After really enjoying Porquerolles, we decided to take another one of Loïc’s recommendations for his ultimate favorite place in France – the Gorges du Verdon. And so we headed out for another 2-day mini trip.

We decided to make the 2+ hour drive via the smaller departamentale roads (non-highway) to see more of the beautiful countryside – vineyards, orchards, quaint villages plus sunflower and lavender fields (one of the trademarks of Provence). Although this landscape has become more familiar, it never ceases to captivate us. More than an hour into the drive the road started to snake up the mountain and we knew we were getting closer. The view expanded into the horizon which meant our road receded further into the mountain making for a narrow path with successive hairpin turns. Just a few feet from Brigitte’s driver’s side window you could see a severe drop (hundreds of meters steep) with only a 1-foot tall stone barrier designated as the partition between the road and the frightening cliffs. Frightening in my mind because it was 2-way traffic on what appeared to be just a little more than a 1-lane road (as is the case in many European towns or countryside roads). Needless to say driving here requires a great deal of vigilance. As we made our way further up the mountain we made a pit stop at Point Sublime, a designated panoramic spot that offers incredible views of the canyon and the river splitting its center. Gorges du Verdon is arguably the most beautiful river canyon in Europe; it’s 16 miles long and half a mile deep. Point Sublime really “wet” our appetite so we decided to grab some sandwiches and eat down by the river bank. The Verdon River is electrifying in its brute force and shear turqoise appearance. No wonder Gorges du Verdon is a very popular destination for rock climbers, kayakers, hikers and tourist with a passion for nature’s beauty. Munching on sandwiches down by the river while being surrounded by this amazing canyon was just incredible. After we ate we followed the narrow foot path for about an hour which took us through the canyon along with a few cave-tunnels. Luckily Brigitte had a flashlight which enabled us to cross the longest one (about half mile); it was pitch-black otherwise except for an occasional headlight or two in the distance as other hikers made their way in the opposite direction. The temperature inside was also considerably much cooler which made the 2-3 inch puddles of water in the tunnel feel freezing cold. Brigitte had sneaker-sandals on so her feet got the worst of it. What got to me wasn’t so much the water but the suffocating feeling of a never ending cave (and not seeing any natural light for minutes at a time). But I motored through to the other side (thanks to Brigitte’s forcefulness) and we realized it was just the beginning of a 7 hour long hiking trail including more caves/tunnels (perhaps another time!). We turned around shortly thereafter and made our way back to the car as we had to move on to our next destination – Sisteron.

This medieval town is known as the gateway to Provence and it’s also where Brigitte’s grandparents are buried (and her grandmother was from). On our way to Sisteron we continued on the smaller departamentale roads and finally struck the jackpot of landscape photography for Brigitte: lavender fields! Patches of vibrant purple rested on both sides of the road intertwined with golden fields of wheat, more vineyards and sunflower fields – talk about an incredible mosaic! We reached Sisteron before nightfall and after visiting the cemetery and a distant relative, we settled into a hotel at the foot of the Citadel. The Citadel is a 12th century fortress that can be seen from great distances on approach to Sisteron (it’s the defining point for this town). It rests at 1,500 feet high atop a hill overlooking the town and river Durance that passes through Sisteron. Even at night this view was something special. So the next morning this was naturally our first point of interest. We did a tour of the old fortress which played an important part throughout history. Notably, Napoleon III passed through here after his escape from Elba (and was not stopped). Now I can say that we too passed through although with far lesser ambitions. The crisp morning sun gave way to a few great pictures after which it was back on the road towards Aix-en-Provence.

Aix is one of Provence’s most prominent city’s with human legacy dating back 4,000 years (and also the town where Brigitte’s mom went to university). We made it here before lunchtime and decided to take a historic walk through the city. Once the capital of Provence during the Middle Ages, Aix has a more recent reputation of being an important university town. It’s also known for the numerous ornate fountains scattered within the old city limit. We started our tour down Cours Mirabeau (one of the principal streets) which has several fountains and a very distinguished architectural look/feel. From the beautiful facades to gigantic wooden doors down to classic door knockers, most of the buildings lining Cours Mirabeau presented themselves in astonishing form. I had heard from a few people that Aix had a lot of personality and now I can say the same. We explored various parts of the old city and later found ourselves at the Musée Granet which held a cool exhibit on Jean Planque’s art collection including several pieces by hometown favorite Paul Cezanne and another Paul (Pablo Picasso). I was never a huge Picasso fan but standing a few inches away from some of the pieces he produced well into his 80s, gave me a new level of appreciation for the old master. Jean Planque was actually an artist himself and befriended Picasso and other prominent artists and amassed quite an impression collection (which is currently on loan to the museum). The museum concluded our visit of Aix after which we drove out of town for about 15 minutes and placed ourselves in the middle of wine country yet again.

Provence is a major and vast wine region comprised of several AOCs (appellation d’origine controllée) or designated wine areas. Among them is Coteaux D’Aix-en-Provence which was our target for a few tastings or “degustation” as it’s called here. We found that quality matched quantity, we loved the rosés and whites and were also impressed with the reds (which are made from a variety of grapes including two big hitters – cabernet sauvignon and syrah). Chateau Beaupré was our last stop (a 4th generation family owned business), and we simply loved their grape juice! The property itself was very attractive – a classic chateau with a cypress trees lining the gravel road leading to the old gate, surrounded by an enormous blanket of vineyards. And all this is just about 30 minutes away from Marseille – which was to be our final leg of this trip.