After a weekend in Toulon, the time had come for us to finally visit the island of Porquerolles just off the coast of Hyeres. If you spend any time in Toulon (or the Toulon area), Porquerolles is a must-see and do. We also wanted to get Loïc off our back as he had been diligently insisting that we go (it’s apparently one of his favorite places in the world).

Porquerolles (or Ile de Porquerolles) is an island situated just a few miles off the mainland and is about 4 miles long x 2 miles wide. The island is sparsely populated and about 80% of it is a natural reserve (back in 2004 only around 200 residents were living there). We caught the 10am ferry on a day without a cloud in the sky and about 12 minutes later we hit Porquerolles’ port. As expected, there were tons of restaurants and ice cream parlors that welcomed visitors as they disembarked.  Also, as there are no cars allowed on the island, we picked up two mountain bikes from one of the numerous bike rental places (for 14 euros each per day – a solid deal), and headed towards the island’s western point called Le Langoustier. According to the map from the bike rental place, the trail to Le Langoustier was dubbed “average” but there was really nothing “average” about it. The rugged trail could have easily tossed one of us off our bikes (if not handled properly) and had an overall elevation of 120 meters at its apex. But the pay-off was highly rewarding with intimidating cliffs, incredible vistas of beaches and mainland, turquoise waters, and lush vegetation.

It was great to be back on a bike but the trail really tested our ambition of seeing various points on the island. I was impressed with Brigitte’s tenacious riding/handling although at a few steep points we both dismounted and pushed onward on foot (with the bikes by our side). The scenery was so awesome, the forest led to cliffs (with questionable edges), and view points where everyone would stop to take in the view. Then it was back through the forest which at times would lead to vineyards (part of the Cotes de Provence appellation). While taking it all in, I could only think of Loïc being right, very right.

After riding about the island for 4 – 5 miles (with only a pit-stop at the beach and dip in the water), we decided it was time to stop for lunch and refuel (although we had also ordered a 2/3 bottle of rosé to cool us down). After lunch it was back on the bikes and our next stop would be the Phare (lighthouse) and Gorges du Loup (both which were about 1.5 miles away). We reached the Gorges du Loup  first which turned out to be our favorite part of the island – it was much like a mini-calanque with rugged limestone rock formations hugging the clear blue water and making for a picture perfect piece of nature. We climbed down closer to the water (envisioning our jumping off the rocks technique), and realized we had this little paradise all to ourselves.. but this was only to be for about 10 minutes until others began converging on our little discovery.

The water was perfect! Clear and warmer than at the beach area. Looking out into the horizon it was perfect blue as far as we could see. We took turns jumping and diving into the water from the jagged rocks (which are impossible to navigate barefoot).  I was thankful for having my flip flops which were perfect for going in the water (but not so much for climbing the rocks, biking, and hiking). Our only regret was not discovering this gorge earlier in the day.. we could’ve easily spent the better part of our day there although it just wasn’t the same with others around.

After cooling off at Gorges du Loup we made our way to the Phare (lighthouse) but seemed to go off-course and found ourselves on a footpath that was highly inhospitable to bikes. The uphill climb (with bikes in hand) for about a half mile was no joke. This was by far the toughest part of our day but we made conscious decision earlier that day to embrace whatever adventures would come our way. From the lighthouse we headed back for the town to catch the 5pm ferry back to the mainland.

We made it back home to Toulon around 6:30pm and couldn’t wait to rave about our day to Loïc.. he was right about Porquerolles, very right! And in total Loïc fashion he introduced us to yet another one of his favorite things: a mint flavored liqueur called Get 27. (Brigitte has been slurping on “Menthe a l’eau” – mint syrup with water –  every chance she gets so Loïc figured she would enjoy the alcoholic version). He poured us a glass on the rocks and told us this was so minty fresh that we wouldn’t have to brush our teeth later! Brigitte loved it, however for me, Get 27 was like a peppermint paddy on moonshine steroids. Cheers Loïc! 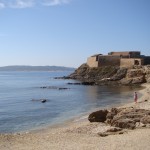 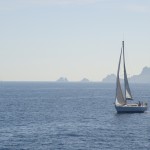 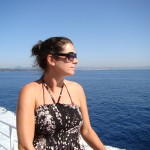 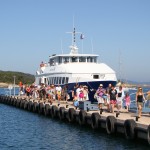 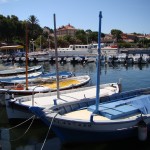 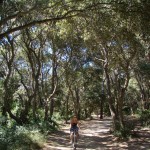 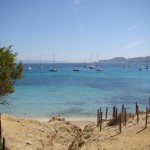 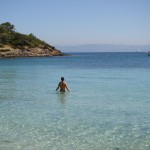 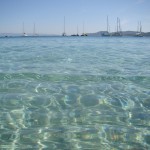 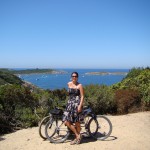 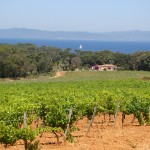 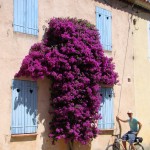 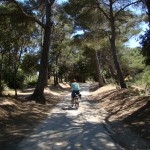 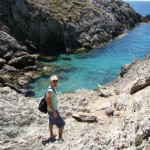 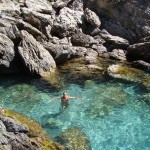 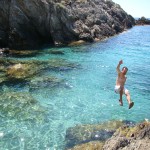 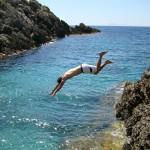 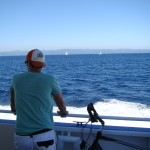 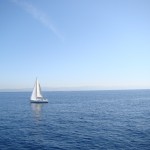 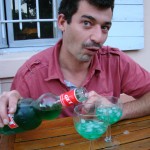 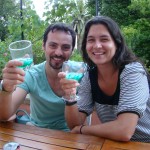