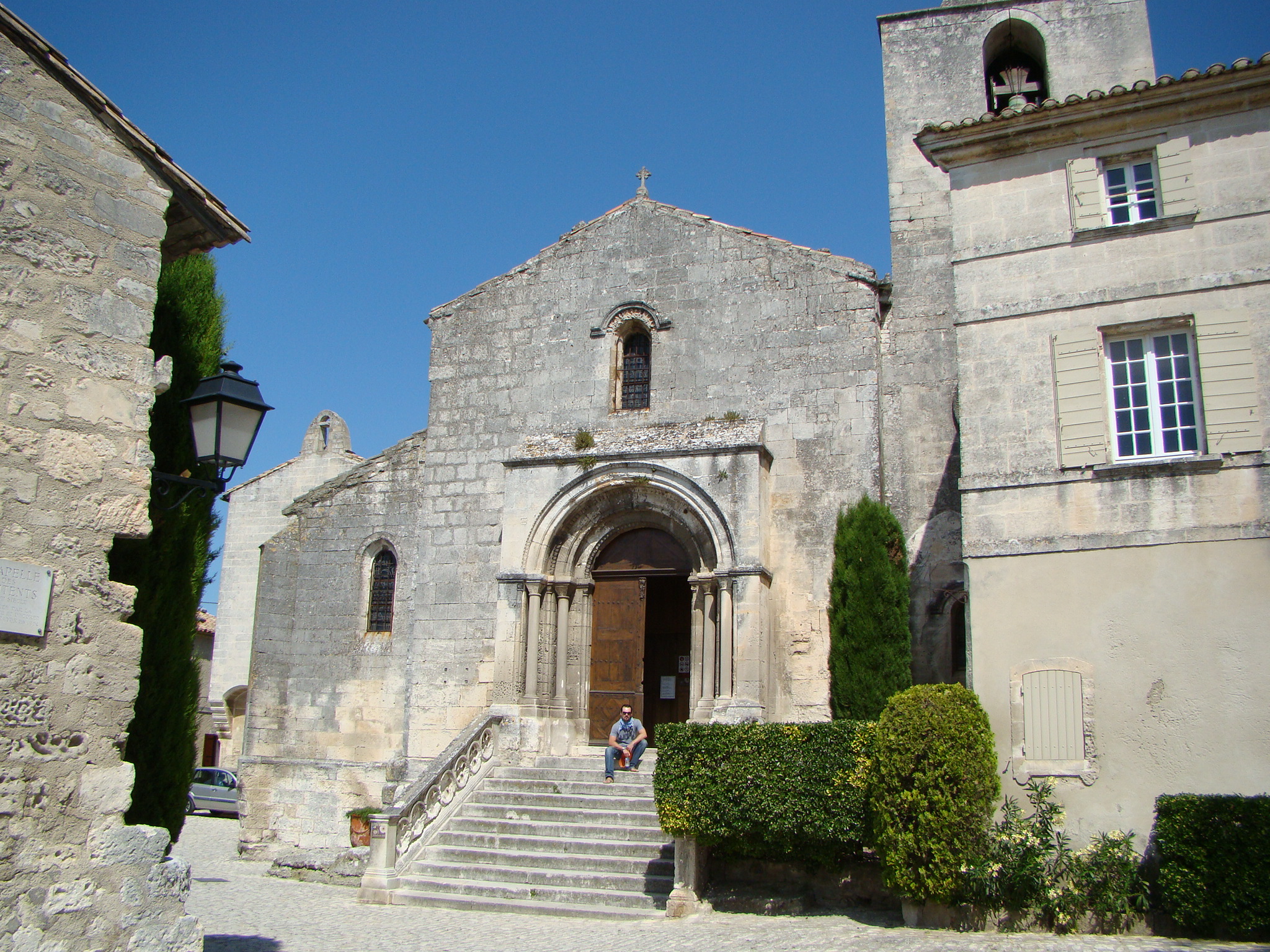 Today we set out for a 3-day expedition around Provence (in the departments of Vaucluse and Bouches-du-Rhone). We’ve been hearing quite a bit about the town of Arles (about an hour drive from Marseille) so this was our first stop. This ancient town dates back to 800 BC but it was the Romans who really left their mark here and this is still evident today. It’s a classical and typical Roman city with an amphitheater, thermal baths, cryptoportico, churches, and cloisters (all of which we visited). We started with the cryptoportico – subterranean passageways whose arches support the structure above ground (in this case a Forum). These were accessible through the Hotel de Ville (City Hall) building. As expected they were dark and suffocating – lacking natural light except for a minuscule hole in the ceiling about 10 meters high. The cryptoportico is shaped as a “U” but there were several little rooms and alcoves that once stored goods and animals. From there we made our way over to the ancient Roman Thermal Baths near the Rhone river which have been preserved pretty well. From there it was on to the Amphitheater which has an interesting history although the most curious things about it is that today it’s home to bullfighting (as well as concerts and other events). Apparently the tradition dates back to the 1850s. Standing among the 20,000 capacity seating I could only fathom what it must’ve been like back in the Roman times.. probably very much like a scene out of Gladiator with hand to hand mortal combat, chariot races and more. The Romans really knew the real meaning of entertainment.

The building structure is immense and occupies a good portion of town. Surrounding it are numerous retail shops (selling postcards, souvenirs and local edible goods) as well as restaurants – a perfect spot for our lunch. After lunch we visited the Church (Romanesque style with a very elaborate facade) followed by the Cloisters. The day pass we bought at the tourism office was a good move as it granted us access to all of these sites for a sweet deal!

Long after the Romans stamped their indelible mark on Arles, came Van Gogh who spent part of his final years here (and in the region). He also left his mark by immortalizing one of the city center’s cafes in his famous “Cafe Terrace at Night” 1888 painting. Needless to say this place was jam-packed around lunchtime (more on Vinnie van G. in a bit).

Arles really made an impression on us but it was time to move on to our next destination: Les Baux-de-Provence, about 25 mins away (some of the coolest 25 mins of driving through the countryside). We took the “departmental” (small roads which traverse the bucolic landscape) and stopped often for pictures. At one point during our drive, we came up to some ruins of Roman Aqueducts, which now rest in the middle of olive country. The ruins were really rugged but made for fun climbing them (although not in flip flops). After a few minutes here imagining what these marvels looked like in their prime, we carried on to Les Baux. The countryside got more and more beautiful and out of nowhere we found ourselves at the bottom of a huge rock formation (kind of like a mountain). Atop this rock rests the village Les Baux which is only accessible on foot. Taking the cobblestone road up the rock led to a dream-like little spot full of shops, cafes and historical monuments. The village appears to have been sculpted into the rock. It was pretty surreal! But the main attraction here is the fortified castle which is at the zenith of the rock. Dating back to the 1100s, the Chateau Les Baux endured centuries of high times, sieges and everyday life for its inhabitants. The best way to really describe this incredible place is to imagine yourself in a game of Dungeons and Dragons. Our tour offered scenes of catapults (and other weaponry used to defend or attack the castle), dungeons, archers’ training grounds, prison cells, watch towers and what were once the dining halls – really cool! Standing atop the watchtower also afforded us some extensive views of the valleys below full of vineyards and olive orchards. As with wine, the French take olives with a superior degree of seriousness. Some of the finest and fanciest olive oil comes from this region (and some of its packaging is quite imaginative – more on this in the next entry).

After Les Baux we made our way to the next town of Saint-Rémy-en-Provence. Similar to Arles, this town shares a Roman past and was also touched by Van Gogh. But there’s more to the story as this is also the birthplace of Michel de Nostredame – aka Nostradamus. Right before entering the town, we stopped to see what’s left of a significant Roman Mausoleum which still presents itself in optimal condition. Etched in the stone are battle scenes of notable Roman victories, a tribute to some of its heroic generals. Nearby we found the psychiatric hospital where Van Gogh admitted himself for a year in 1889.  This proved to be one of his most prolific periods as he created more than 140 paintings in less than a year (like “Starry Night”, “Irises” and most of his famous landscape paintings). Now THAT is CRAZY! To top off our tour of Saint-Rémy, we checked out the house in which Nostradamus was born (you can only see it from the outside as it’s actually someone’s home who is probably annoyed by the non-stop camera strapping visitors).

This was one of our fullest days of the trip and well worth it. Our final destination was Avignon which we reached by nightfall. We had dinner in the beautiful town square (Place D’Horloge) and discussed our plan for the next day – a day of wine tasting in Chateauneuf-du-Pape, Vacqueyras and Gigondas!