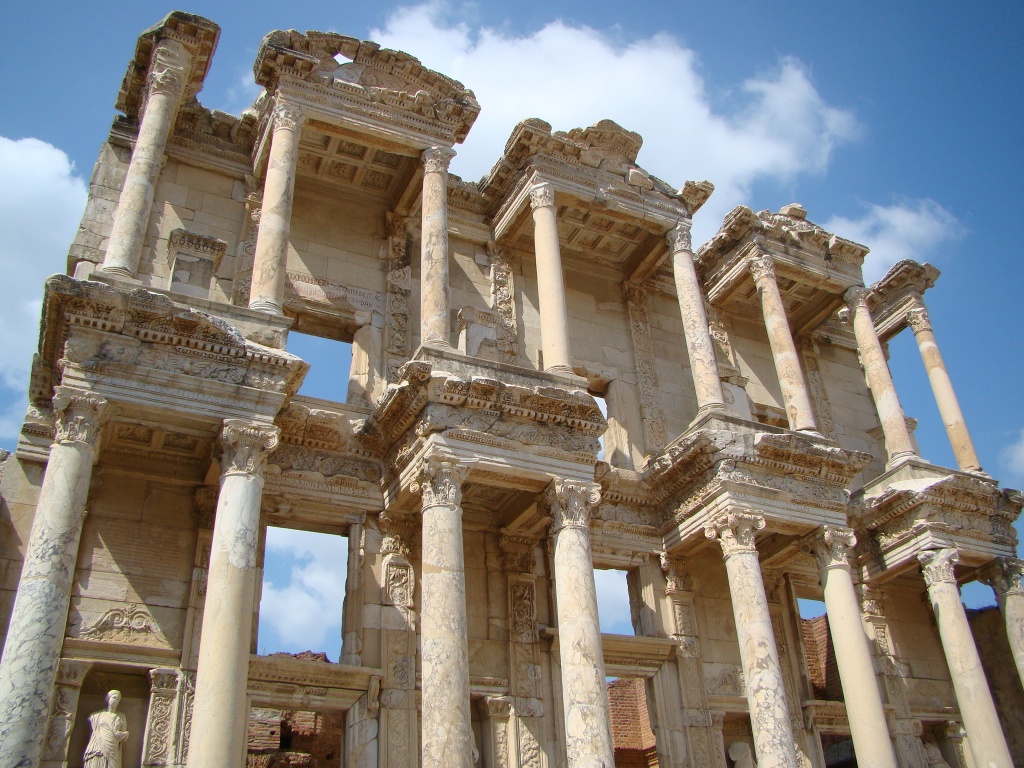 The next stop on our tour was Ephesus, an ancient Greek city that’s situated in the Izmir province of Turkey (on the western coast). The city retained its prominence during Roman times and became its capital in the East (or Asia Minor). But eventually Ephesus saw its destruction at the hands of invaders coupled with an earthquake in the 7th century AD. In its prime, Ephesus was home to a whopping population of 250,000 and also home to the Temple of Artemis (one of the seven wonders of the ancient world). We were psyched about going back thousands of years and learning about ancient civilizations.

Sezgin, our soft spoken tour guide gave us a preview of the day’s points of visit – house of Virgin Mary, Ephesus, Temple of Artemis and Isa Bey Mosque. Luckily there were only five of us for the day and so the intimate group made for easy bonding – Ivan and Martina, the couple from Switzerland (whom we befriended in Cappadocia), and Lucy representing Queensland Australia. Our first stop was “the house” of the Virgin Mary (or what is believed to have been her residence for the last 40 years of her life). The pilgrimage sight was excessively busy which meant about a 30 minute wait to get in. Today a chapel rests on the spot where the house is believed to have been. We were quickly ushered through the chapel & house and then made our way to the Wishing Wall next to the spring (which is supposed to have healing powers). Next it was time for Ephesus or the ruins of where once the incredible city thrived. The mix of Greek and Roman ruins were astoundingly impressive and abundant – Ephesus used to be the second largest Roman city in the empire after Rome. Despite our visit being 2,000 years after the fact, the ruins painted a vivid picture of how life was in those days. Most striking were the many parallels we can draw to our lifestyles today. From the wide boulevards with pedestrian sidewalks lining them, to the gymnasium where gladiators trained, to the public library, the pharmacy, the agoras (or markets), the brothel and the two amphitheaters or arenas. Also, the residences of the rich were located above those of the poor (for better views), and they were beautifully decorated with floor mosaics and painted facades. We also learned from our guide that slaves would warm up the toilet seats for their masters by sitting on them right before the masters pooped. Amusing and fascinating was the overall experience of Ephesus and of course unforgettable.

After lunch the tour led us to a leather factory and entertained us with a run-way fashion show highlighting a few trendy pieces. The leather jackets looked and smelled great but the way I saw it was: either pay rent for a month or buy a jacket. Sensibly we didn’t purchase anything and neither did the others in our group. After our brief stop at Melissa Leather, we made our way over to the Temple of Artemis – one of the seven wonders of the ancient world. The original temple has a long history and dates back to about 6th century BC and served as sacred place for Artemis, the goddess of Fertility. Over time the temple was destroyed and rebuilt three times, the last time giving way to a temple larger than the Parthenon in Athens. It gained its “Wonder of the World” status for its architectural might and sheer size. Unfortunately all that was left of it was a lone (re-erected) marble column that somehow withstood the tic-toc of time.

The last stop on the tour was supposed to be the Isa Bey Mosque but our afternoon was cut prematurely (not sure why). So we decided to grab a drink with Ivan, Martina and Lucy back in Kusadasi (the town where we all stayed). We also checked out Pigeon Island (and its Pirate Castle), right off the mainland overlooking the horizon on the Aegean Sea. Later that evening we all met up again for a sunset boat tour but unfortunately it wasn’t meant to be (the sea was too choppy). Instead we hung out on the upper deck of the boat (having another drink), while being rocked in port – the alternate way of enjoying the sunset. For the first time in a while we felt as though we were hanging with good friends who also share a passion for travel and the awesome experiences it brings. We didn’t want the evening and the sharing of stories to end.

The next morning rolled off with a three hour bus ride to Bodrum, the famed beach town on the Aegean Sea. One of the town’s significant landmarks is the 15th century St. Peter’s Castle which we visited. The castle & fortress now house the largest Underwater Archeology Museum in the world exhibiting hundreds of uncovered artifacts from antiquity. Staring at items from shipwrecks dating to the 6th century BC felt like being on set of a Discovery Channel episodes on ancient sunken treasures – pretty damn cool! The fortress itself was impressive too along with the panoramic views of the sea and the nearby Turkish and Greek islands – tempting us (hmm).