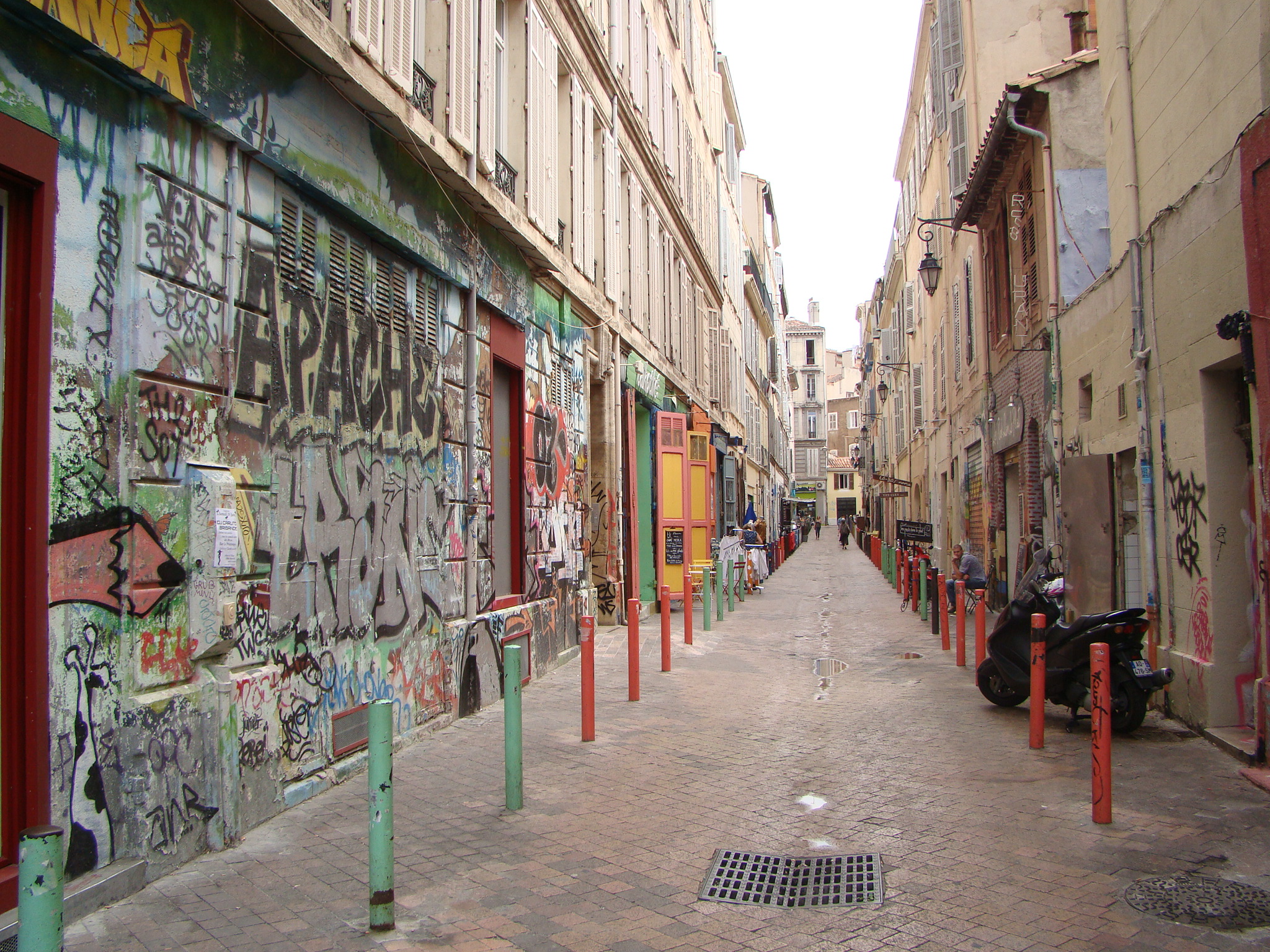 We arrived in Marseille on Day 15 after a long travel day from Dakar via Madrid. Our layover in Spain was 5 hours (4am – 9am).. we had a few hours to kill and hoped to pass out (on a bench, on the floor, anywhere really), before the early morning rush hit the airport. We passed out on the floor for about an hour and at around 6:30am the airport came to life with travelers, airport personnel, and routine security announcement in every language imaginable (not cool when you’re running on only 3 hours of sleep – a few silent moments can be so precious). A few long hours later we landed in Marseille and made our way to Laetitia and Loic’s apartment (our new home for the next couple of weeks). Loic was home with Adrien (their 16-month old son), and welcomed us with his usual endless jokes.

The next morning we set out to see Marseille, a city with intimate significance for Brigitte as she spent most of her summers here with her maternal grandparents. The first must-see destination was the “Vieux Port” which really defines this city. There must have been thousands of boats in the port of all sizes which made for some great photos. Marseille is the second largest city in France with a population of over 800,000. There are numerous interesting/important places to see but we limited our first day to the port followed by the Abbaye de Saint Victor, the Palais du Pharo and a trendy area leading into the Cours Julien –  we walked up Rue Grignan which is littered with luxury retail shops, restaurants, cafes and galleries. The Abbaye de Saint Victor was really cool and dates back to the 5th century – unfortunately the coolest part (its crypt) was not accessible to due to renovations. From there we checked out the Palais du Pharo which offers one of the city’s best panoramic views (another must do on the typical Marseille travel list). As we were getting closer to lunch we decided to make our way back to the apartment. Along the way we encountered tons of graffiti which not only gives this city an edge but also helps bridge its ancient historical past with modern day expressions. You get a sense of traveling through centuries of history just by walking from one neighborhood to another – I really dig this town! But our first day in Marseille came to a close as we headed out to the Laetitia’s family’s country house for the weekend (in Toulon – about 45 minutes east of Marseille).

We had a great weekend there and the digs were pretty amazing. The house resembles a mini chateau with its signature tower, and is completely surrounded by trees of various types (cypress, pine, palm, lemon, olive and more), and the views are pretty awesome too. There was also a swimming pool on the premises along with a ping pong table, and plenty of space to run around and play (which is perfect for little Adrien who is so energetic and playful). Being that we were also super close to the beach we naturally went there on Saturday with Laetitia and Adrien. The water at the Mourillon was beautiful but pretty cold still as summer here is just about getting started. But that didn’t stop us from taking a brisk dip. We had a great afternoon at the beach and enjoyed a tasty lunch at one of the waterfront restaurants. I think the girls both had steak and I opted for the mussels with fries which came in huge pot and really hit the spot. We enjoyed great meals here throughout the weekend and best of all we were able to have them outdoors. After a couple of days I started appreciating the incessant crackling of the cicadas, hooting of the owls, and cool breeze of the Mistral (a regional wind – that really helps on hot summer days). Sunday was very mellow and hot so we laid low and enjoyed a day a the pool with Laetitia, Loic and their friends. As it turns out all the guys here play ping pong (and damn well too), so it’s only fitting that we spent a few hours smashing balls back and forth at each other. As nightfall beset, we enjoyed another yummy dinner with good friends.

Now here are two highly palatable towns that add layers of charm and character to the South of France. We started our day in Bandol’s AOC – Bandol is not only a town but also one of France’s numerous Appelation D’origine Controllee (a designated wine region held to the highest standard), that I’ve been anxiously waiting to visit and do lots of tasting. It’s definitely an interesting wine region with sloping vineyards, rustic chateaux and a maritime climate. The views are spectacular as vineyards give way to lavender fields and patches of beautifully tainted flowers – a painter’s dream. And I could only think of my mother’s paintings of Provence and her love for the region. But the artistry we came face to face with (and indulged in), was Bandol’s impressive wine repertoire. We visited a few wineries and had the pleasure of tasting several reds and rosés (the appelation’s forte). The reds were very expressive and consistently savory from one winery to the next. The dominant red grape here is Mourvedre, a tannic and muscular grape that’s capable of aging. It was really cool to see a few bottles from the 80s at some of the wineries (I had no idea this wine was capable of such extended slumber). We also did justice to the local favorite and best: Rosé. This area is renown for its rosés (although most come from Cotes de Provence – another nearby appelation), and they are really crisp especially on hot summer days like the previous few. We picked up a few bottles (mostly rosés) in an effort to stay cool this coming week as temperatures will rise.

After a few tastings in Bandol (on an empty stomach), we decided it was time to stop for lunch and headed to Cassis – besides all “caves” close for lunch between 1-3PM. This idyllic old fisherman’s commune is a gem right on the Mediterranean coast. In simple words: turquoise water, beautiful cliffs, rustic and colorful architecture, cozy port, delicious seafood, and pebbled beaches. An on top of that, it’s also a wine town (Cassis is another AOC and is known for its white wines). Lunch was delicious and consisted of a local fish for Brigitte while I settled for the mussels and fries (1 kilo or 2.2 lbs of mussels for 9 Euros!). Our next stop was the beach which gave us an opportunity to relax and take in the beautiful landscape.

On our way back to Toulon we decided to take the local road (the departementale instead of the highway) which seemed to be designed for stopping to take pictures or stopping for more wine tastings.. needless to say we did both.