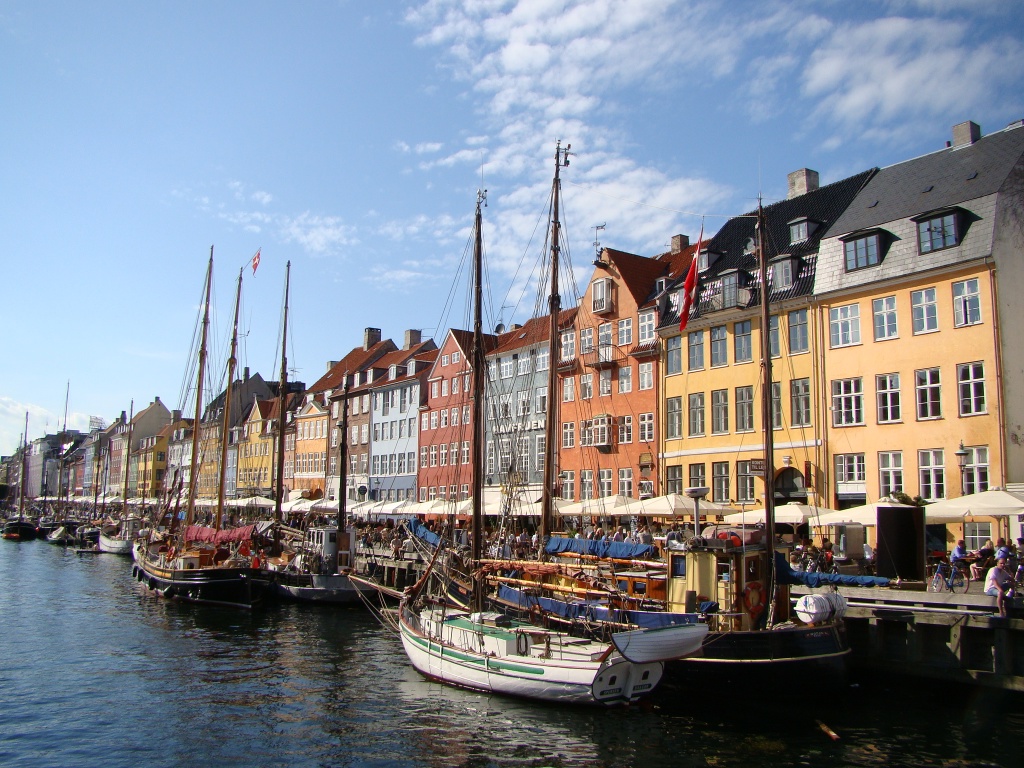 Our friends’ wedding in Europe (Sweden), is what brought us back across the pond with a stopover in Copenhagen (Denmark) for 2 days. This was to be our first trans-Atlantic trip after last year’s memorable 8-month journey around the world. My initial gut feeling was “how do I do this?” as if I had lost my instincts for a “normal” trip, one lasting less than a week. Nonetheless I was pumped about visiting a part of the world neither Brigitte nor I had seen before.

Copenhagen is a very cool town, it’s old, it’s on the water and it’s very laid back. Beer drinking seems to be one of the most popular activities and takes place pretty much anywhere people are found (in the city’s plazas, by the waterfront/canals, on the street, oh and in bars and restaurants too of course). Weather wise the rain gods played nice and so we captured the perfunctory photos of colorful Nyhavn (the famous 17th century canal), the historic district and contrast shots of pretty blue skies and various landmarks that decorated the city. We even hopped on a boat tour which was a great way of exploring the town, the old mixed with the new. And on a 70-degree day with clear skies Copenhageners were out picnicking in droves. I had never seen so many wicker baskets before in my entire life.

One of the most popular tourist attractions in Copenhagen is the Little Mermaid, a simple statue based on the eponymous character from H.C. Andersen’s fairy tales. There really isn’t much to the statue, period! In fact one can easily wonder why thousands of tourists flock to the waterfront to see the solitary lady in the first place (which is exactly what was going through my mind). But perhaps the fascination lies in terror the mermaid had endured over the years (decapitation, vandalism, explosion and the list goes on). Today she’s in one piece again attracting the masses from all over the world (including us).

An afternoon of walking around town also exposed us the the city’s old cobbled stoned streets, the Royal Residence, an old fortress and other notable landmarks like Frederick’s Church, a beautiful marble building whose dome just seemed to be asking to be photographed. The town boasted numerous splendors among them the Ny Carlsberg Museum named after the famous local brewing family. The impressive building housed a blend of local artists (including this guy Johan Lundbye, an outstanding artist who sadly died at 29), along with a palette of the finest Impressionists.

For the other attractions we teamed up with Marco, Andrea and Dogan (friends who just like us were also going to the Sweden wedding and decided to visit Copenhagen first). We made a stop in Christiania’s Freetown which as the name suggests is “devoid” of rules and somehow above local jurisdiction. An interesting and unique kind of place to say the least. And that wasn’t the only oddity for the night. Copenhagen’s Absolut Ice Bar was our post-dinner destination which is a bucket list item for sure. After paying close to a $30 cover charge (per person) we got outfitted in these blue cloak-like polar suits designed to us keep protected from the freezing temperature. But about 20 minutes in, the sobering cold started creeping through the polar suits inspiring Marco to bust out in 50-rep push-ups just to keep warm (for some reason this didn’t seem odd at all). Overall the ice bar was no different than any other bar, there was dance music, cold drinks and even some Americans. But I suppose there was one main difference: instead of having ice cubes in our drinks, we had drinks inside our ice cubes. Ostensibly we only chilled at the ice bar for about an hour.