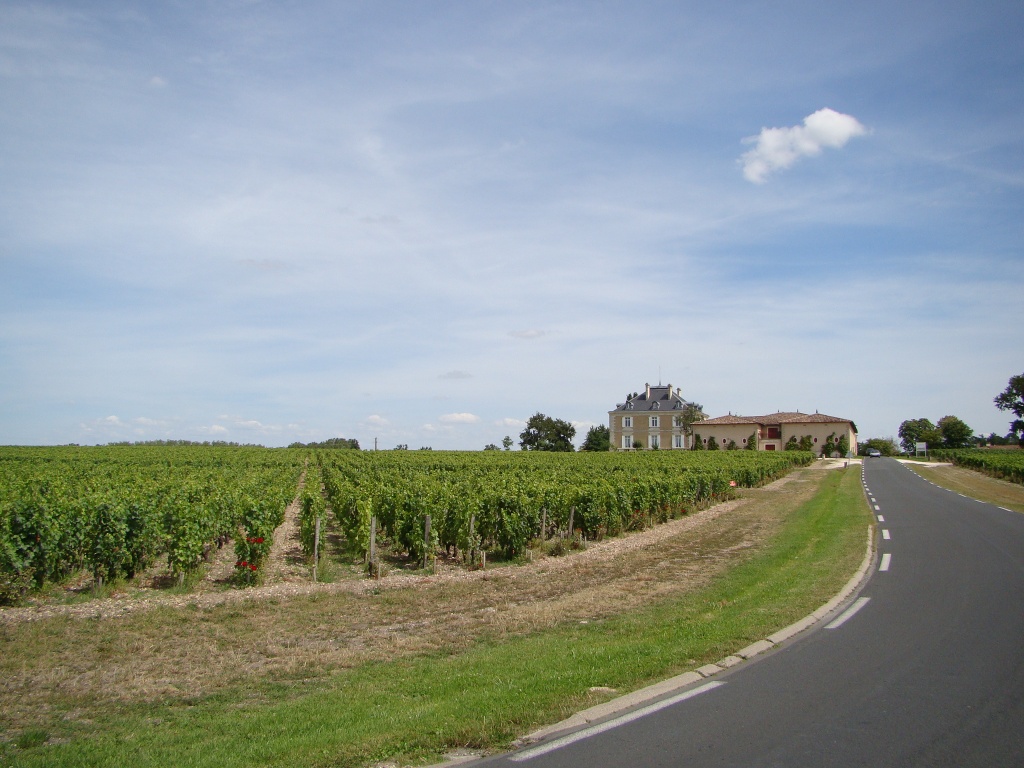 Going to France for 3 days is not the easiest way to vacation. I did miss Europe a lot but this wasn’t a relapse episode after last year’s extended journey (at least I keep telling myself so). This time around it was for the wedding of our dear friends Philippe and Charlotte. The setting was the southwest of France which meant several things. First, I would be reuniting with my wife who was already there. Second, the wedding was set to take place in Bayonne (in the Basque country, a region neither Brigitte nor I had visited before). Third, the day after the wedding we would be roaming around Bordeaux to visit a few wineries, something I had been dreaming about for several years.

With only a couple of days to explore the area we had no choice but to hit the ground running. Our first taste of the Basque country was beautiful Bayonne, known for its delectable Jambon de Bayonne (dry-cured ham), and it is also the place where the bayonet was born. The town itself is severed by the Adour River and its romantic waterfront restaurants offered great choices for a dinner spot. We were eager to indulge in a local meal especially after stumbling into a couple of charcuteries (or meat shops). There, one can easily stand paralyzed in awe by the rich and aromatic collection of whole pig leg hams and sausages hanging from the ceiling. The best part of course was being able to sample some of the delicacies, which left us licking our chops. But there was so much more to the beautiful town that proudly wore its red, green and white colors on its sleeve and where the sanguine tradition of bull fighting lives strong. The Sainte-Marie Gothic Cathedral was a perfect example with its characteristic and ornate double steeple. Upon entering we were greeted by an emphatic pipe organ piece that was refracting off the massive stone columns.

With the wedding taking place in the mid-afternoon the following day, we decided on a morning road trip across the border into Spain to the city of San Sebastian (about 30 minutes away). We were both hungry for some tapas and it had been way too long since either of us had been to Spain (12 years for Brigitte and 15 for me). We walked around town for a couple of hours scoping out the beautiful architecture while working up a serious appetite. San Sebastian proved to be worth our venture and our meal was a long overdue reminder of Spain’s culinary prowess. Biting into that tortilla espanola took me right back to 1997 when I had spent a semester studying in Madrid.

Later that afternoon our dear friends tied the knot in a beautiful church and blessed us all with an amazing and festive reception. I think Brigitte’s favorite part was being able to repeatedly savor side by side shavings of Bayonne and Serrano hams during cocktail hour. The party took us well into the morning when we finally said goodbye to the beautiful newlyweds and their international entourage.

Waking up at 9am the next morning was tough, but knowing that we had an afternoon of wine tasting lined up (in Bordeaux’s Left Bank), totally made up for it. I was introduced to fine Bordeaux wine in 2004 by my father in law but only started appreciating it  about 5 or 6 years ago. This trip around Bordeaux felt very much like homecoming, and in all fairness for all the Bordeaux I’ve been drinking I was hoping there’d be a vineyard bearing my name (or at least a cork). Bordeaux is the largest wine producing region in the world and also the best (my opinion as well that of top wine critics). But not all of its wines are created equal. Its finest are categorized by a “classification” system with first class wines fetching $1000 a bottle in a great vintage. But that wasn’t my calling, I was simply eager to finally visit the appellations (or designated wine regions), whose wines I have been drinking, learning about and adoring for years – Paulliac, Medoc, Margaux, St. Julien, Pessac and more. And that’s exactly what we did, we tasted wines from several chateaux or wineries. As opulent and delicious as the wines were, the landscape was just as marvelous. The little towns we drove through were all inter connected by vineyards that stretched into the horizon, a bucolic landscape accentuated by the green vines, bright blue sky and limestone-colored towns. And every so often we would pull up to an actual chateaux or castle that dated back to the 16th or 17th century (and most were shockingly beautiful). Many of these can be seen on the labels of Bordeaux wines and up until now that was the only way I knew of them.