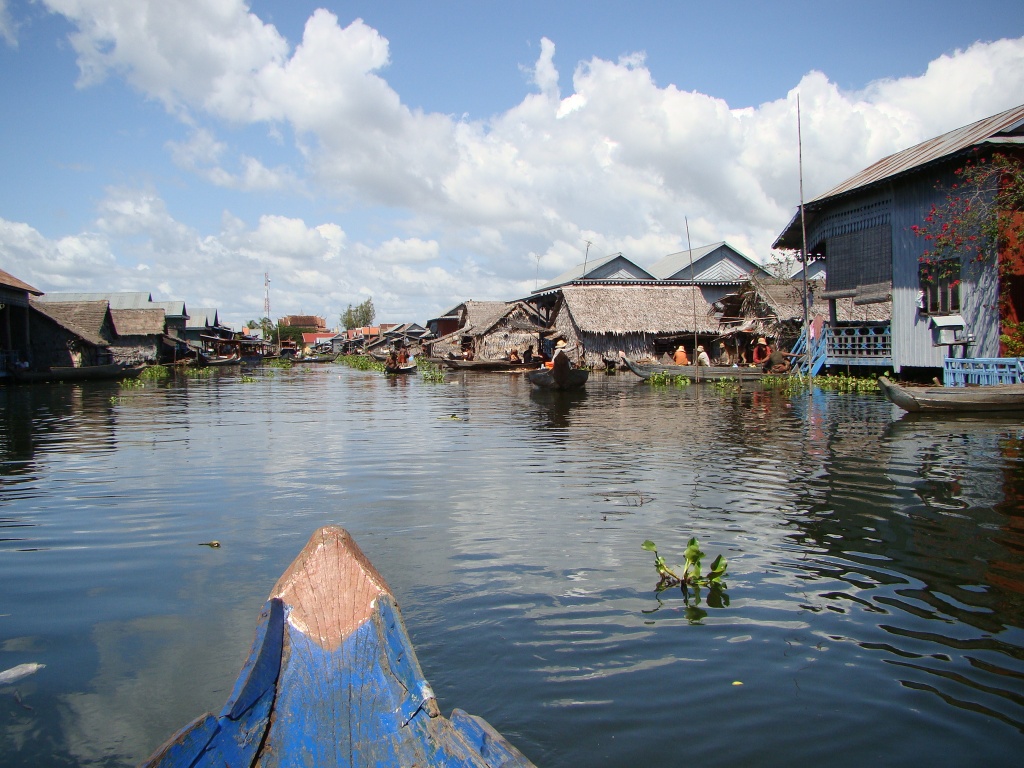 Our morning visit of Pre Rup and Banteay Srei temples was electrifying and got us revved up for a busy afternoon. There were four more temples on the itinerary but on the way to the first, we made a pit stop at the Land Mine Museum. Cambodia’s past of being tangled in internal conflict as well as in the Vietnam War, saw it on the receiving end of major bombing and indiscriminate land mine blanketing. The guy who created the museum (Aki Ra, a former Khmer Rouge soldier who switched sides actually laid a ton of mines), is now the most active expert in spotting, defusing and removing them. Countless incidents have occurred in which innocent children became victims of land mines, even decades after they were laid. The museum was highly informative and brought to light the painstaking task of locating and defusing the mines – Aki Ra believes there are still about 5 or 6 million undetonated mines in Cambodia. Until now he removed about 40,000. Putting things in perspective, only a handful of nations (not a top pedigree list by any means), have still not signed the Ottawa Treaty agreeing to ban the use of land mines. Among those countries are China, Russia and the United States.

The first temple after the museum was East Mebon, another beautiful reddish pyramid-like structure. We grew particularly fond it because of its four elephants feature which reminded us of our time bathing the gentle giants in Laos. After that it was on to Tasom temple which was reminiscent of Ta Prohm with trees mangled about the perimeter. Other impressive features were the red and yellow hues of some of the walls, this temple was gleaming full of life. Brigitte went manic with her camera and Mike and I found ourselves way ahead of her wondering what the slowdown was. Oh!

After a short tuk tuk ride we found ourselves on a long wooden walkway (over a moat or small lake filled with trees half sticking of out the water), leading to the inundated Neak Pean temple. This one was like no other. The setting was out of a dream, the wooden walkway finally gave way to a rectangular shaped clearing which was completely filled with water. In the middle was the tip of Neak Pean as if it came up for a breath of air. Similarly the legendary snake that adorns the temple had its head and tail perked out of the water while its body rested submerged. Most remarkable was the reflection of the sky, puffy white clouds and temple’s head bouncing off the water – as if wiping away any delineation between the real and surreal. Wow!

The last temple we visited was Preah Khan which brought back memories of Bayon temple at Angkor Thom. One of Preah Khan’s gates was a carbon copy of Angkor Thom’s South Gate with two rows of guardian warriors. And then there was the head in the center of the gate’s gopura (monumental tower). Mike went on to tell us that this is where coronations of Khmer kings took place. So we climbed the very spot for a touch of royal legacy – our fantasy – and so the adventure at Angkor continued. But the most distinguishing feature of Preah Khan were its long hallways as part of the temple’s cross formation. They seemed to extend indefinitely as did the intrigue of these amazing temples. With each one came a renewed feeling of exhilaration, the feeling of discovering something new – a distinguishing feature or perhaps just hearing about their mystical past.

After two long adventurous days of visiting the temples at Angkor (in the unrelenting heat and humidity), we laid low the following day. Our only outing was in the evening – we actually went back to the temples (we couldn’t keep away), to catch the sunset from atop Phnom Bakheng. The 3-day pass to the Angkor temples served us right.

The next day brought on a totally different adventure as we visited one of the floating villages on the Tonle Sap Lake. We had heard much about these villages and their stilted homes so we were very excited. Why the stilts? Well, due to a curious natural anomaly the Tonle Sap river reverses its course (instead of flowing South it flows North and inundates a 10,000 square mile area around Tonle Sap Lake – increasing the water level 10-fold and going from a depth of 3 feet to approximately 30). The transformed landscape also brings about an incredible abundance of fish. And so entire villages rely upon fishing as their main source for income. Another byproduct of the floating villages are tons of little children who spend half their lives in the water. I’ll be putting my money on Cambodia’s swim team in the 2020 Olympics! Getting to the floating village was quite an experience as well. After an hour long tuk tuk ride to where land had been overtaken by Tonle Sap river back spill, we embarked on a small boat which took us to the dock (for transfer to a larger boat). We were lucky, as the alternative to the little boat was an oxcart ride in knee deep water. The large boat set off for the 1-hour long trip through the countryside that’s typically dry for half a year. Trees half-sticking out from the water became commonplace. And occasional palm trees rose about 70-percent out of the water. It felt somewhat “unnatural” but the scenery made up for it. We were virtually surrounded by water and every so often would float by a municipal building of sorts with water levels rising to its first floor – not what you’d expect to find in the middle of a body of water. After about an hour or so we finally reached Kompong Phluk village. We passed by a large green/blue wooden building (a secondary school), which led to a few rows of wooden homes on the water creating the impression of “streets”. As we gently passed down one of the streets little children waved and greeted us with “hellos” and “goodbyes”. Other children were jumping off their front porches into the water, some showing off a bit. They’ve gotten used to seeing tourists come about their village but I wonder how long it would take us tourists to get accustomed to a life on the water. The streets or canals serve not only as their playground and navigation system but also as their bathing/washing basins. We even saw a guy actually drink some of the water by cupping it into his mouth – astonishing to us but maybe just a “way of life” for him. Our boat stopped halfway down the canal at a restaurant (which was just the porch part of someone’s house), and we grabbed a drink. The entire house was an open space where we had full view of their living quarters, an intimate look into their lives. Overall the people in the village lived very basic and their way of life seemed incomprehensibly challenging. But their kindness and friendliness said much about their spirit. The lady of the house where we stopped for a drink took us on a small boat ride in the mangroves (for $3 each), just behind the village. Making our way gingerly passed trees while being chirped at by local birds was fascinating. We even spotted these electric red and blue dragonflies fluttering about. There was so much green everywhere and so much life. After the “flooded forest” it was time for our larger boat ride back to the tuk tuk. Our captain, a boy no more than 16 years of age cranked up the engine at times as we sped by other boats. He smiled graciously when I handed a small tip as we disembarked, a smile I probably won’t ever forget. On the tuk tuk ride back into Siem Reap we encountered rain, a cooling blessing after a hot day on the water exploring nature’s incredible imagination.

At night we headed downtown by the Old Market (same location as the previous night), and enjoyed one last dinner as we thankfully toasted our time in Cambodia. The following morning would see us off to our next destination – the beaches of Thailand.