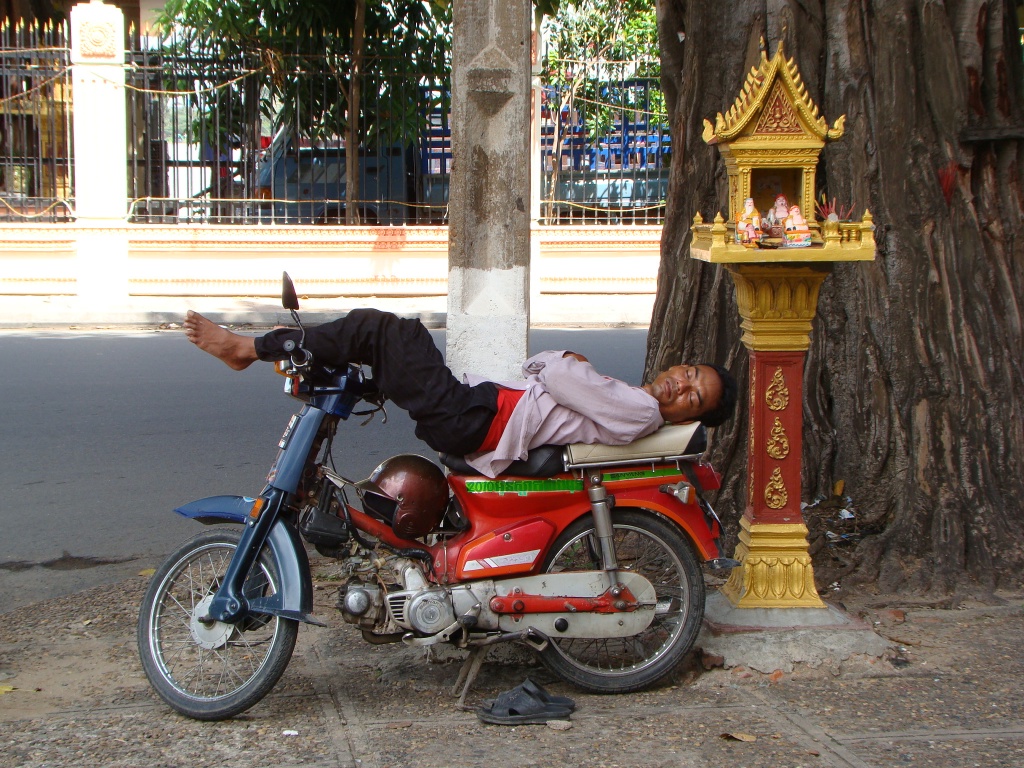 The bus ride to Phnom Penh (from Ho Chi Minh City), lasted around 6 hours. It consisted of two stops, one at the Vietnamese/Cambodian border (where we got our visas on arrival), and another in a small Cambodian town. Overall it wasn’t bad at all.

We had an uneventful first night in the Cambodian capital (we just grabbed dinner and drinks not too far from our hotel). Interestingly we quickly learned that prices were quoted in dollars as the good old “greenbacks” are still king around here. Convenient – yes! But also inconvenient in that prices seemed higher than in neighboring Vietnam and Thailand.

The next morning we hopped in a tuk tuk and rode over to Tuol Sleng Genocide Museum. A former high school, Tuol Sleng became an infamous prison during the Khmer Rouge rule. The Khmer Rouge (a Communist organ), came to power in 1975 and ruled Cambodia until 1979 (just under 4 years). During this time it exterminated anywhere between 1.7 – 3 million Cambodians (via executions, torture, starvation and simply working people to death). 17,000+ people were brought to Tuol Sleng in those years and a mere 7 survived (but only because the Khmer Rouge had to flee). The old and grey high school complex exhibited vivid signs or wear and tear and also exuded an ominous feel. There were several buildings that were used by the Khmer Rouge for various purposes (incarceration, torture and execution, the end goal for all prisoners). As we made our way down the hallway of building A (the most terrifying in my mind), we entered former classrooms which were converted into single room torture chambers. The rooms were left the same as they were when the Vietnamese army busted through and ousted the Khmer Rouge (who cowardly fled). The walls were painted yellow and the floors consisted of white and yellow tiles – some of which were covered by dark splotches, perhaps old pools of blood. In the center of each room was a metal bed frame upon which the victim was shackled to while undergoing severe beatings and torture. Hundreds or thousands died in these very rooms. Horrifying were the large black and white pictures on the walls of each cell depicting the lifeless bodies of victims as found by the Vietnamese (in the corresponding cells). This is the part where the stomach starts signaling the brain that something unimaginably grotesque was registered, while being consumed by drowning sadness and sorrow (for the victims), and anger and hatred towards the perpetrators. And this was just the beginning of our museum tour. Although heavy in previewing the terror suffered in buildings B and C, I was a little more settled there than in building A. Here’s where hundreds of pictures of those sentenced to Tuol Sleng prison were exhibited; a head shot was taken of each prisoner upon arrival. Men, women and children of all ages stared back at us from the grey walls, some with enigmatic yet terrifying looks on their faces. Again, the sorrow we felt for them was indescribable. Also part of the exhibit were the weapons, tools and torture mechanisms used by the Khmer Rouge along with depictions of their use. These people were ruthless, unremorseful and sick. Tuol Sleng was a difficult but necessary place to experience – with each visit more and more people learn of the atrocities committed there by the Khmer Rouge.

After Tuol Sleng we made our way to Wat Phnom, one of the city’s main Buddhist temples perched on a hill. Visiting the temple allowed us to get a sense of Cambodia’s spiritual side and it also uplifted our mood a bit (after a somber morning). From there we enjoyed walking along the Mekong River promenade, taking in remnants of old French architectural endeavors (like Vietnam and Laos, France also colonized Cambodia). The pastel colored buildings and their wooden shutters were very characteristic of the colonial days.

We also stopped by the Wat Ounalom (temple), and observed kids perform a traditional songs and dances. We liked the waterfront part of the town so much that we later returned for dinner.

The next morning we hired a tuk tuk for a ride to the Tonle Bati and Ta Prohm temple, about 22 miles out of town. The weather was just right for a 1-hour open air ride – sunny and hot. The first 40 minutes or so saw us dribbling our way through Phnom Penh’s heavy traffic (cars, motorbikes, tuk tuks, trucks, bikes and pedestrians). As we made our way outside of the city limit, many brick buildings were replaced by wooden shacks and makeshift shops (selling all types of goods). One notable product was gasoline, sold in old Pepsi bottles of all sizes. Just about everyone was selling them leaving us to wonder if maybe the gasoline was watered down or blended with other oils.

After about an hour on the main cement road, we diverted onto a pothole stricken clay road surrounded by infinite rice fields – a beautiful landscape. Not sure if Brigitte managed any good pictures here as the tuk tuk bounced its way through. But we made it to Tonle Bati ok and explored the impressive Ta Prohm temple. The scene was similar to the Champa Temple ruins in Vietnam – dark red in appearance and peppered with tropical vegetation, rugged yet serene is what I felt of the 12th century structure made from volcanic rock.

We enjoyed our ride back into Phnom Penh but our tuk tuk adventures were far from over. Later that afternoon we got picked up again by another tuk tuk and made our way into the countryside. We had signed up for a sunset ATV adventure that took us through a couple of rural villages. But first we stopped at Choeung Ek, one of thousands of Khmer Rouge killing fields discovered after their ousting. I will spare some of the details but the killing fields were mass execution graves. Today a symbolic monument (or stupa), exists honoring those who died there (about 17,000). As we walked through the field listening to the audio guide, we noticed clothing fragments, teeth and bones that recently surfaced from the graves. This usually happens during the rainy season which is upon us now. It’s as though the victims were still speaking from the graves more than 30 years later. The other thing that spoke of the horrific past was the “killing tree”. As the name implies, this is where Khmer Rouge guards ruthlessly smashed little children to their death. They avoided using bullets because they cost money. So beating and hacking people to death became their M.O.. This explained seeing numerous fractured skulls in the stupa.

After Choeung Ek we finally embarked on the ATV ride which was a lot of fun. The beautiful countryside gave way to small villages where excited little children ran towards us and extended out their hands as to “give them five”! So we obliged and also waved to others who couldn’t get into close proximity of us. Reflecting back, these kids are living in very basic conditions (to say the least), and who knows what sort of life and opportunity awaits them as they grow older. Putting a smile on their faces was the least we could do and it certainly reciprocated the effect. We can be hopeful that a better future awaits them compared to the millions who perished over 30 years ago.

Afterthought: some of the Khmer Rouge leaders are only now on trial for crimes against humanity (and they are very old). Unfortunately the main leader (Pol Pot), was never prosecuted and got to live into his 80s. What kind of justice will be served remains to be seen..