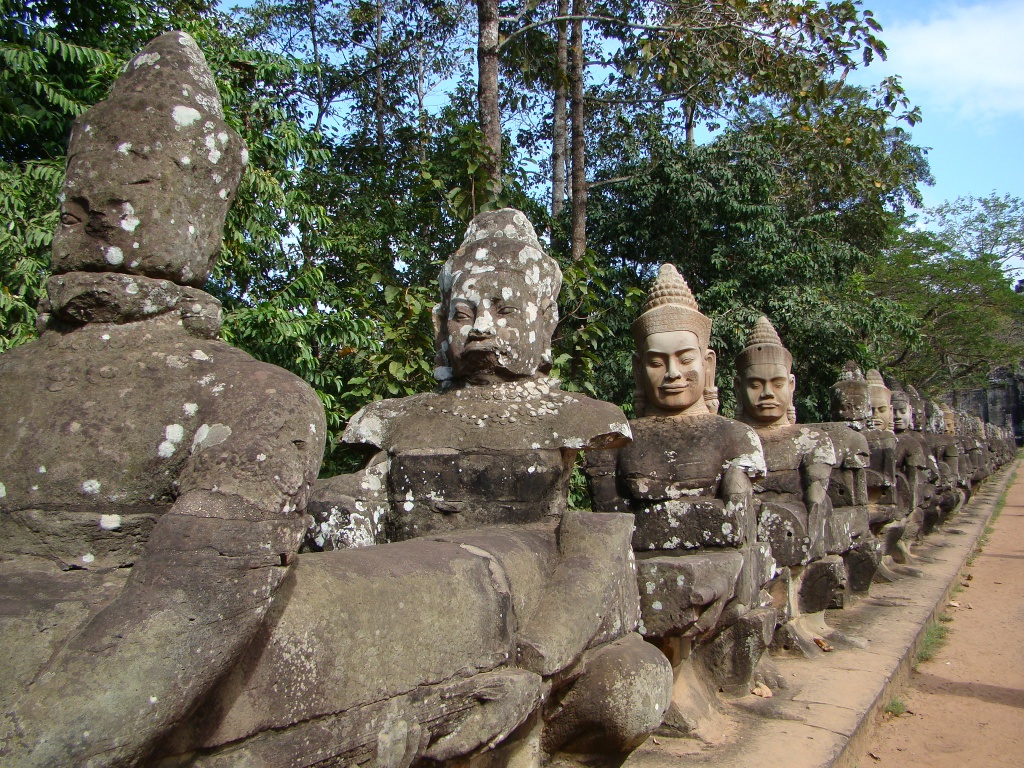 The main reason for coming to Cambodia was to see Angkor Wat, one of Brigitte’s top 5 must see places in the world. Angkor Wat is just a few miles away from the city of Siem Reap, the launch pad for most visitors to the great temples and naturally our next destination. The bus to Siem Reap (from Phnom Penh), tore through the Cambodian countryside and saw us there within 6 hours. Remarkably in various parts the entire landscape seemed inundated except for the actual road (which was about 2 – 3 feet higher than its surroundings. Many roadside homes unfortunately also appeared flooded on the ground floor. After all this was the rainy season…

Our first night in Siem Reap (which literally translates to “Siam Defeated”), was very low key. If anything it was filled with anticipation for the next morning’s tour of Angkor Wat for which we had arranged a 2-day guided tour.

Chameroun (or Mike), picked us up at 8:30am the following morning and we tuk tuk’ed our way to the Angkor complex. Unknown to us was the fact that Angkor Wat is just one of over a thousand temples built by the Khmer Empire during their rule of Southeast Asia between the 9th and 15th centuries (the empire spanned across modern day countries like Thailand, Laos, Myanmar, Malaysia and Vietnam). The descendants of the Khmer people are present day Cambodians and the legacy of the Angkor temples speaks of their glorious past. We also quickly learned that we would be seeing several temples in our 2 day tour, not starting with Angkor Wat. Instead we kicked off with the Angkor Thom complex (meaning “Great City”), which houses the amazing Bayon temple (or Temple of Beaming Faces”), among other galleries and smaller temples. En route we passed by a small colony of roadside hungry yet friendly monkeys and just couldn’t resist – they were too cute. So we stopped and fed them some bananas which they quickly snatched from my hand. Then it was on to the heavily guarded South Gate which offered a sample of what laid ahead. Two rows of warriors or guardians carved from stone lined the road that led up to the elaborate South Gate – a massive head centered in the middle of the gate is said to be symbolic of the Khmer King (Jayavarman VII), who commissioned the “Great City” during the 12th century. Brigitte started her photo session while Mike gave us more historical background on the city and temples. He also told us that Bayon has 51 towers each with 4 faces, the same one we saw on the South Gate. Whether the faces represent the king or Buddha is still debatable between historians and archeologists but undeniably the faces of Bayon made for an awesome sight. Being in the presence of vestiges from such a historic powerhouse of an empire felt empowering, spiritual and jolly! After climbing down from Bayon, we made our way past the Elephant Terrace, a 900 foot long terrace taking its name from the elephant carvings on its walls. According to Mike this is where elephants used to get trained during the days of the Khmer Empire. The impressive terrace also comprised other carvings – lion headed guards (singhas) and mythical bird/man warriors (garudas).

From Bayon we made our way past a couple of other temples (including the beautiful Takeo). Next it was on to Ta Prohm, made famous in the movie Tomb Raider. What’s amazing about most temples is their location. The entire Angkor complex lies on a 390 square mile area densely covered by forests (with intermittent pools, moats and rivulets), making for a magical setting. Going from one temple to another typically meant covering anywhere between one to several miles (which is why the tuk tuk came in very handy). Although on most occasions we had to walk from the tuk tuk through parts of the forest in order to access some temples. This was the case with the picturesque Ta Prohm, as we made our way by lush green vegetation and across a small body of water left over from the past week’s heavy rain. And then smack in front of us was Ta Prohm; the temple that seems to coexist with the silk cotton trees whose roots virtually grow on, through, and from various parts of the temple itself. What an amazing yet bewildering sight!

After lunch it was time to finally take on Angkor Wat (or “City Temple”). The ancient Hindu temple was constructed in the 12th century and dedicated to the god Vishnu. However as the Khmers later changed their religion to Buddhism, so the did the tones and accents on Angkor Wat. Today it still remains the largest religious building in the world – very true as it took us close to 3 hours to navigate it. We approached Angkor Wat from the East Gate (the back), which seemed peculiarly quiet with no-one in sight. Were we to have this marvel all to ourselves or was this just a selfish delusion (yup, a delusion it was – by the time we left there were hoards of people everywhere). As we entered the complex Mike dropped more knowledge about Angkor Wat’s architectural style, the meaning of its carvings, its galleries or levels and its westward orientation (not East as is the case with Buddhist temples). The immense structure served up a heaping platter of positive impressions. The raw architecture composed of sandstone and laterite with black and grey hues gave off a sense of antiquity. Close inspection of the erect towers (massive stones laid on top of stones without mortar), amplified the temple’s fortitude integrity. And the delicate polished carvings of Apsara dancers, deities and mythical characters completed Angkor Wat’s trifecta of subliminal multi-dimensionality. Brigitte and I walked up the temple’s highest level and explored the square-shaped grounds. Seeing a couple of young monks up there confirmed the temple’s authentic pulse, as opposed to just serving as an attraction to curious tourists (about 2 million annually). As we further walked about its grounds, Angkor Wat’s appeal seemed to have permanently set into our veins. It’s the kind of place you keep giving looks to over your shoulder as you walk away. For us it meant exactly that plus a return trip early the following morning to watch the sun rise over it. 5:20am and surrounded by hundreds of other camera armed “insomniacs” is what we had got ourselves into – unforgettable in many ways and well worth it!

Later that morning we met up with Mike again and started our day 2 exploration.   We saw a couple of temples in the morning starting with Pre Rup followed by Banteay Srei. It was about a 1-hr tuk tuk ride to Pre Rup which meant getting an adequate dose of the Cambodian rural scenes. As we passed through small villages little children waved us along with radiant smiles. Shops featuring fabrics, confectionary products (palm sugar candy for one), cold drinks, and other goods lined the road. Patches of rice fields and dispersed livestock (water buffalos and cows), filled our view at times on a backdrop of beautiful blue skies and green distant fields – a dreamy landscape.

Then as we diverted onto a dirt road we had finally made it to the Pre Rup temple. The fiery red-brick pyramid-like structure jumped at us with moss or weeds covered towers. Although smaller than the temples we saw the day before, there was something unique about Pre Rup. Perhaps the combination of brick and laterite as the main components, or its super steep steps which we bravely climbed. The vibe of this temple was also singular, maybe due to the believed funerals that occurred here. Pre Rup means “turn the body” and Cambodian belief has it that the ashes of bodies were routinely rotated in different directions as part of the burial processions. Mike had pointed to a rectangular coffin like brick tub which was where bodies and ashes became one.

Next was Banteay Srei or “Lady Temple”. It was similar to Pre Rup in its reddish color but that’s where the parallels ceased. Banteay Srei had one level only (ground level). As we approached it Mike stopped right in front of its gate and informed us about the elaborate carvings of Hindu deities (Shiva and Vishnu), depicted throughout the temple. The legends were animated as were some of the temple’s accents – the steadfast guardian monkeys and garudas on all four sides of temple’s center. But one of our favorite features were the picture frame windows, architecturally and artistically endowed. We had fun putting on some of our best poses while Mike snapped a few shots. The gentile Banteay Srei was yet another temple of impressive magnitude that totally wow’ed us.

After a day and a half at the Angkor complex we had finally begun to scratch the surface of relics descended from an incredible empire. Angkor is so much more than beautiful temples, it’s living history, indelible proofs of an ancient civilization that left us with a tangible link to their past.