The next stop on the Germany leg of our trip was the Southwest region where we stayed with family (the Schwarzwald or Black Forest region to be exact). We were welcomed by Mirela and Nicu who were overly hospitable and made sure we didn’t go hungry even for a mere half hour. On our first day Nicu and Mirela drove us to the nearby town of Baden-Baden for a visit. The town dates back to Roman times and remnants of the empire’s reign are still visible today; we saw the Roman Thermal Baths for one. This charming and ritzy town is a popular destination for the rich and is home to several renown spas/resorts that offer a full cure treatments. We made our way around town and checked out the Trink Halle (Drink Hall with the natural spring) where mineral rich water can be sampled. However only 1/8 Liter (half a cup) is recommended per day as the water contains various potent minerals which could be detrimental if consumed in larger quantities. Next we popped into the elegant Spielbank casino for a quick look before pounding the center streets. This casino is more than 200 years and apparently the oldest of its type in Germany.  Dostoyevsky is said to have written “The Gambler” after he lost all his money (and his shirt) here. Outside, cobblestones paved our way in some parts and colorfully painted buildings titillated our thirst for architecture. Right across the canal that runs alongside Baden-Baden is a park rich in vegetation which defines the region’s opulent green component. All in all Baden-Baden was an impressive town that gave us a taste of Germany’s historical places.

The next day we made our way to Frankfurt am Main (the one most people know of – there’s another Frankfurt not too far from Berlin which was part of East Germany), to visit my cousin Dadiana (Mirela and Nicu’s daughter) and her adorable dog named Paul. Frankfurt is a major European financial center whose skyline is dominated by skyscrapers of various banks. This is the first thing we noticed on our approach into the city. From there we got a peek of the Red Light District which is literally a stone’s throw from the towering banks. Then it was into the city’s center (which is mostly modern) – Frankfurt was reduced to rubble when nearly 80 percent of the city was destroyed during the 1944 bombing campaigns. Of the remaining 20 percent, only a handful of old buildings still exist today in the old center (Römerberg) – predominantly the Old Town Hall which was constructed during the 1500s. We also checked out the nearby Saint Bartholomew’s Cathedral which was unique in its red brick exterior and interior. Shortly thereafter we decided to grab a drink in the old center square (aka Römer) where we tried a couple of local specialties: Apfelwein (Apple Wine – similar to a cider) and Handkäs mit Musik (curd cheese topped with vinegar and onions). The later literally translates to “cheese with music” which earned its name from the sounds it caused people to make after consuming it (and I don’t mean vocal sounds).

After walking around a bit more and checking out the Eisner Steg iron bridge which was built in 1869, we made our way back to Dadiana’s place. There we were welcomed by her mom with another great home-cooked meal. After dinner, we went for a walk near her apartment and soaked in the scenery – idyllic fields where Paul was very happy. 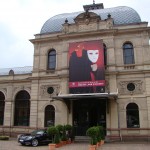 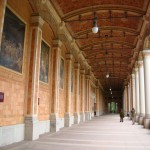 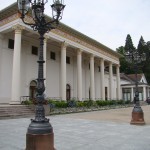 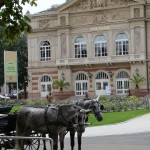 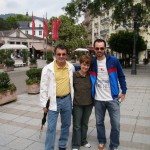 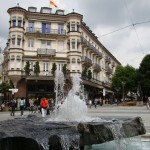 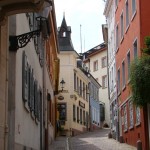 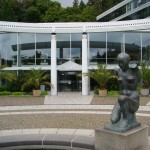 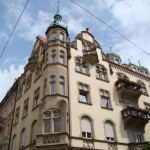 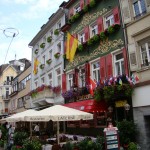 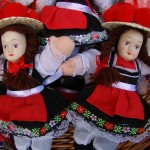 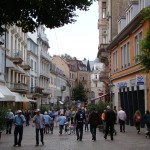 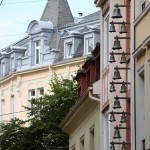 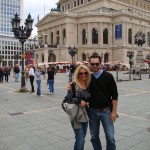 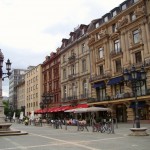 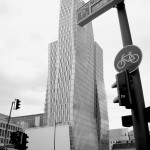 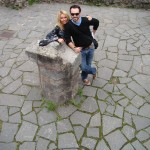 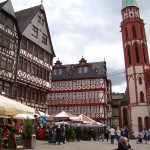 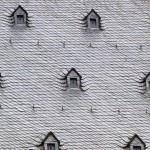 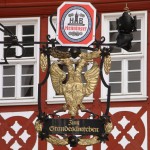 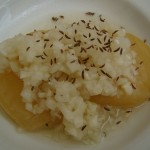 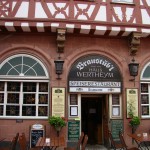 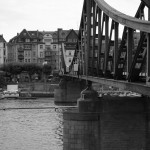 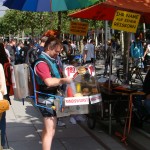 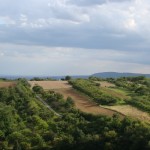 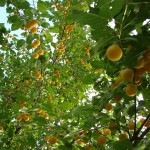 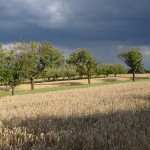