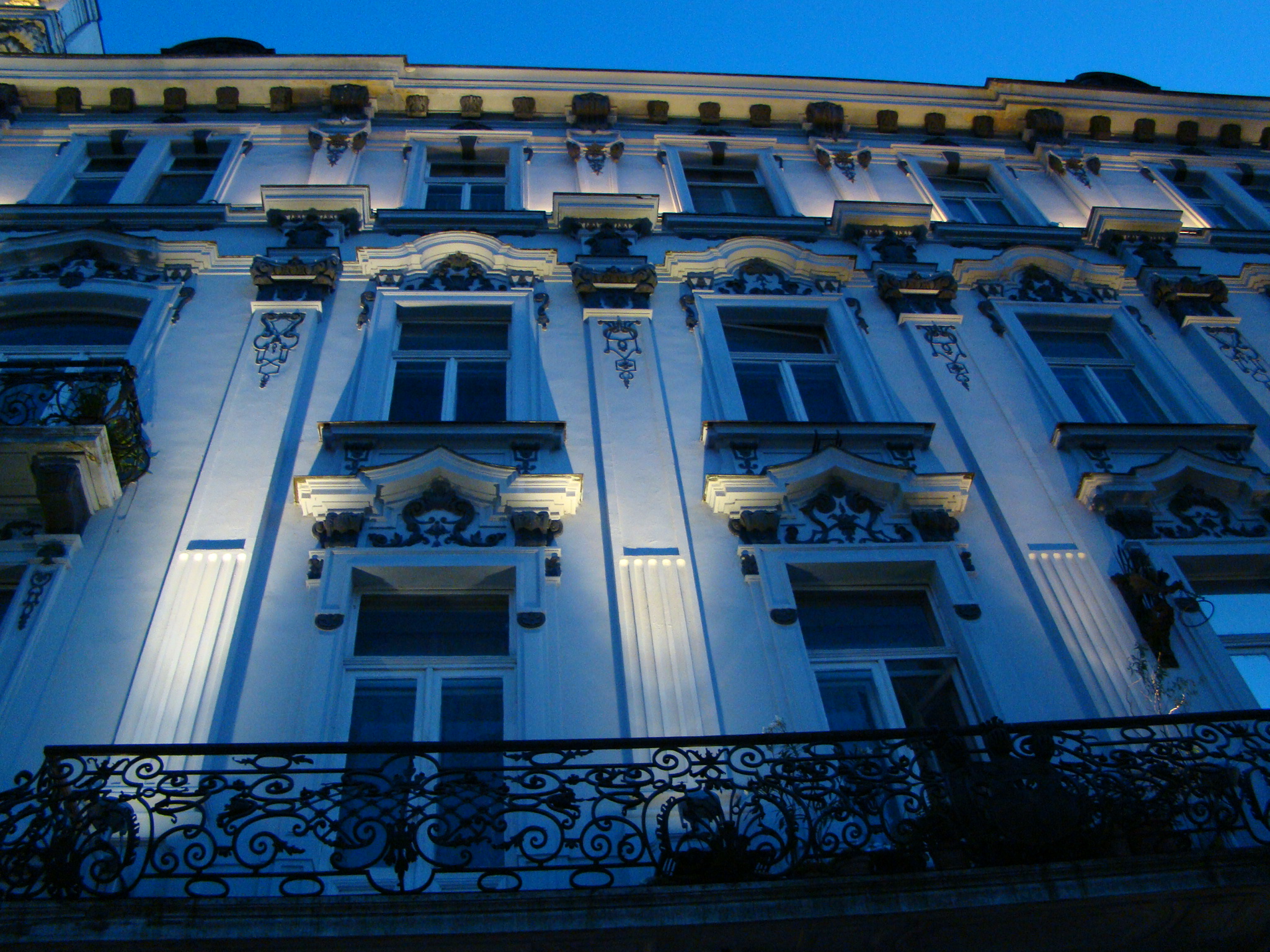 We arrived in Bratislava (Slovakia’s capital), in the evening around 6pm and settled into our hotel. Thunderstorms deterred us from marching into the old town so we enjoyed a few hours of Slovak television comprised of Knight Rider re-runs and music videos (kind of like what MTV used to be back in the day). Our hotel was located in the communist section of town which meant  all buildings (including ours), were über-plain and lacked even the slightest notion of architectural imagination. It felt as though we had regressed 20+ years to the grey days of the communist state. Nonetheless we decided to grab dinner at our hotel which in turn set the bar for very hearty and yummy food (that followed us throughout Slovakia). Brigitte went with the national dish (Bryndzové Halušky), dumplings with sheep cheese and bacon and I grabbed a pork schnitzel. A glass of wine was about $1 and a half liter of beer was $1.50 or dirt cheap even by dollar standards. And so were our main dishes at about $5-7 each!

Visiting Slovakia bore special significance for Brigitte as her great-grandfather had emigrated from there to the US back in the early 1900s. The next day we were on a mission – to trace back some of Brigitte’s roots. So we set out for the town of Myjava (about an hour north of Bratislava), where great-grandpa Hradsky was from. Today Myjava appears to be an industrial town and even the main square downtown was indicative of that. There were no fortresses or any visible evidence of a medieval past to suggest that maybe Brigitte’s ancestors may have been rulers of castles (as her last name indicates). But we did manage to locate one of the town’s cemeteries and started combing it for potential relatives. A task I thought would last all day actually started paying off within 3 minutes or so. Brigitte spotted a grave for a pair of Hradskys followed by another and then another and another! Even I spotted a couple which now put our total at about a dozen Hradsky graves (for a total of about 20 people). Now Brigitte has to weed out the real Hradskys from the non-related, something maybe her sister can help champion.

From Myjava we decided to make a little detour to the medieval town of Trenčín and visit its famous 13th century castle. But first we lunched in the colorful main square and watched the imposing castle before heading for it. En route we stumbled upon the Tourism Info Office which had a statue of Zdeno Chara in front of it (which was cool to see). Chara is a native of Trenčín as well as the captain of the Boston Bruins and a 2011 Stanley Cup Champion. Oh, and his name in Slovak is actually pronounced “Hara” not Chara as we were informed by one of the town’s locals. As mighty as Chara stands so does the Trenčín castle atop the highest point of the town. We explored the grounds which included several reenactments from medieval times: archery practice pit, sword-making shop and even a birds training ground where we got a peek at owls, falcons, hawks and eagles. Soaring up like eagles, we climbed up the castle’s tower which gave us grand perspective of the town and surrounding areas below. The tower also housed an exhibit on various coats of arms from the nearby area.

After our tour we headed back towards Bratislava and finally explored its intimate old town. We were both charmed by the architecture, the cobble stoned streets and the pastel colored building facades. There were also several life-size bronze statues (of various characters), peppered throughout the old town which made for fun in locating them. As night filled the sky we headed towards the Bratislava Castle, a 13th century castle that played an important role throughout history (Slovakia’s as well as Hungary’s). The white castle and its fortified walls were illuminated by reflectors making the complex pop against the black sky. Just as contrasting was our view of Bratislava from atop the hill. Right beneath us stood the historic old town and a half mile in the distance (across the Danube), we could see the old communist section – now a breeding ground for construction and development. Not to mention the UFO bridge connecting the two parts of town  – this is the city’s newest bridges with a ufo-like object resting at its apex. Bratislava is rapidly growing city and the audacious imprints of global brands rest atop some of the new corporate towers in bright neon form. This is a city with two faces rapidly widening the gap between its historic roots and its modernized future.

The next morning we went back into the old town for a daytime perspective of the city and some of its important landmarks. We even saw the changing of the guards at the Royal Palace. But another major landmark is just a 10 minute drive outside Bratislava. Devin, another impressive castle overlooks the Danube and Austria but remains mostly in ruins today. The Maiden Tower, which appears like a rook on a desolate rock, was the most captivating part. Because of its strategic location (at the confluence of the Morava and Danube rivers), the site has been settled since the Neolithic Age. A cold arms exhibit was on display (inside one of the remaining chambers), which educated us on castle sieging and defending. Devin Castle knew all about that.

Soon after we said “dovidenia” (goodbye) to Devin and headed south for the border into Hungary.