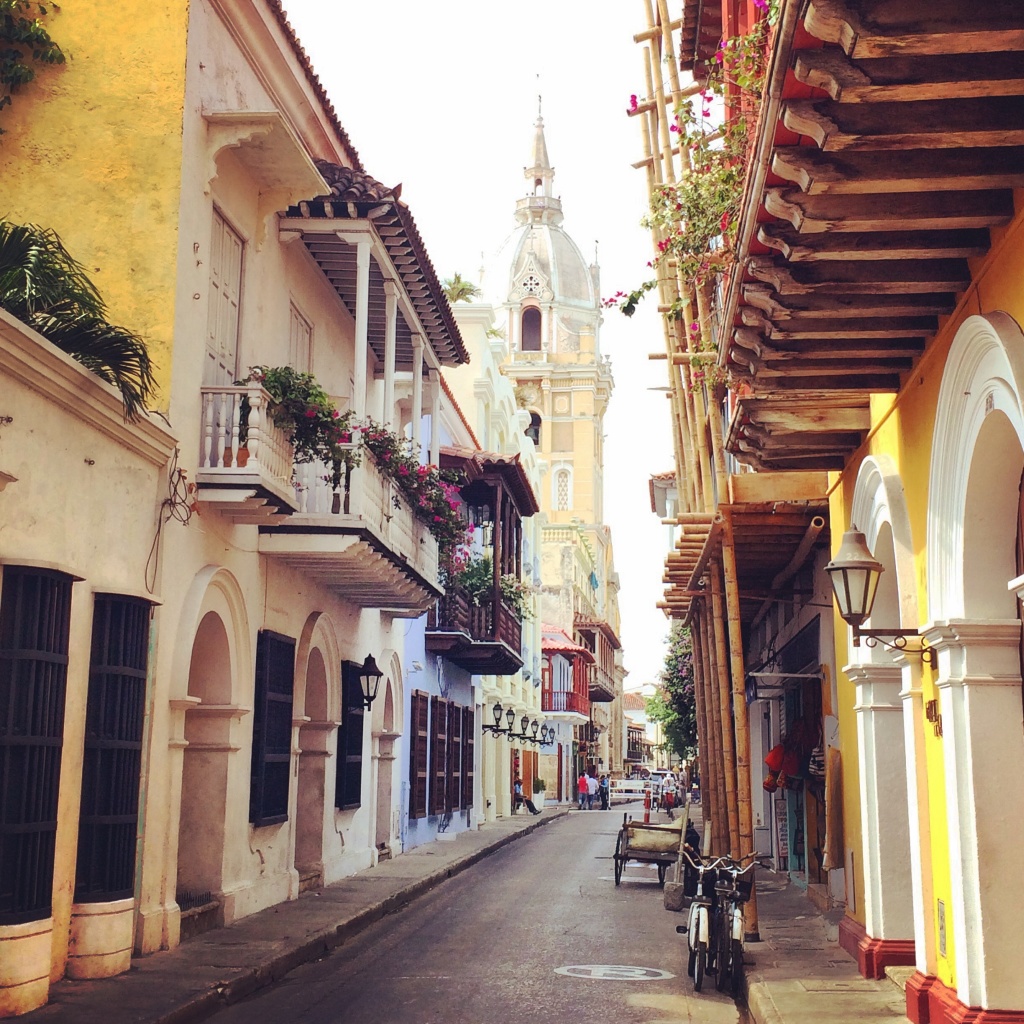 It’s been roughly 2 years since our last post, no, we haven’t stopped traveling, we’ve just been busy with life which included expanding our clan. As first time parents we made a conscious decision to expose our little one to travel early on and adapt to the situation as it comes along.

This was the case with our trip to Cartagena. It wasn’t Olivia’s first, second, or third time traveling abroad, but it was the first time she was of “age” and we had decided on a new destination for all 3 of us.

We dedicated a full week to Cartagena and enjoyed our pool-equipped accommodations in the neighborhood of San Diego, just minutes from El Centro (but still within the walled city). The pool was quickly integrated within our daily routine, a great way to combat the omnipresent heat and humidity that’s characteristic of the tropical city.

Cartagena has its roots as a Spanish colonial town that’s situated on the northwestern Caribbean coast of Colombia. It’s preservation over the centuries offers visitors a tangible link to the past as time had played a gentle hand here. Layered on top, the city’s cultural and culinary wealth has real depth and we indulged ourselves at every opportunity. Daily we set out bright and early to explore the 400+ year old city, navigating through the mosaic of its brightly colored streets boasting beautiful architecture with signature street facing balconies. Within minutes from our “casa” in San Diego we accessed the numerous notable historical sights within the Centro and its open Plaza de la Aduana or main square. Also on the list, the Inquisition Palace: for history with a twist of gore this is the place, however today its peaceful garden serves as paradox to the countless executions that occurred there. The Gold Museum: for a look at ancient civilizations and their splendid artisanship in gold, this museum delivers on their legacy. And the St Peter Claver Convent/Church: if you’re seeking serenity, great architecture and a respite from the heat then this is the spot. The Cathedral is yet another highlight, its tower visible from virtually any point of the city.

Walking the city was our choice mode of navigation and we encountered countless restaurants, bars and shops along the way. Stopping often for cold drinks, food and breaks in the shade become routine. Armed with restaurant recommendations from friends along with local suggestions, we worked our way through a long list. We tried several places in the Centro and in its neighboring Getsemani, a more demure part of town decorated by vibrant graffiti. Our two favorite meals of the trip both happened in Getsemani at Oh La La (French/Colombian Bistro), and La Gaucha (Argentinian).

After a few days exploring the city, we embarked on a day boat trip to the nearby archipelago that consists of 27 islands scattered throughout the Caribbean Sea. Turquoise waters and fine sand beaches is what most brochures had advertised just a boat ride away. Our hotel recommended Isla de Encanto due to its laid back vibe (absence of relentless souvenir vendors), and proximity to Cartagena (1 hour by speed boat). Although the water wasn’t as clear and crisp as we had dreamed of, we did enjoy the beach and the prolonged dips in the water while taking turns with our daughter, Olivia.

As the week wound down we paid a visit to the nearby Castillo San Felipe (a quick cab ride away), the largest fortress built by the Spanish Empire outside of Spain. Imposing in size, the castle sits atop the San Lazaro Hill offering an open vista of Cartagena and the vast Caribbean Sea that disappears into the horizon. As a masterpiece of defense, the fortress served as protector to Cartagena and thwarted numerous foreign invasions over the centuries. Our audio guide took back us in time giving context to the mammoth structure and its design. One key feature was the dark and endless tunnel system connecting various parts of the fortress while filtering through a cool breeze. Still facing Cartagena today, Castillo San Felipe remains a defining figure in the city’s history as well as a reminder of the city’s might and prosperity.

Cartagena was a demystifying aperture into part of Colombia’s rich culture and warm people. Our week seemed to tic away too soon as we lost ourselves within the timeless city driving our curiosity well beyond its walls. It also proved long enough for Olivia to pick up her first Spanish word, “hola”.

One thought on “Colombia (Cartagena)”