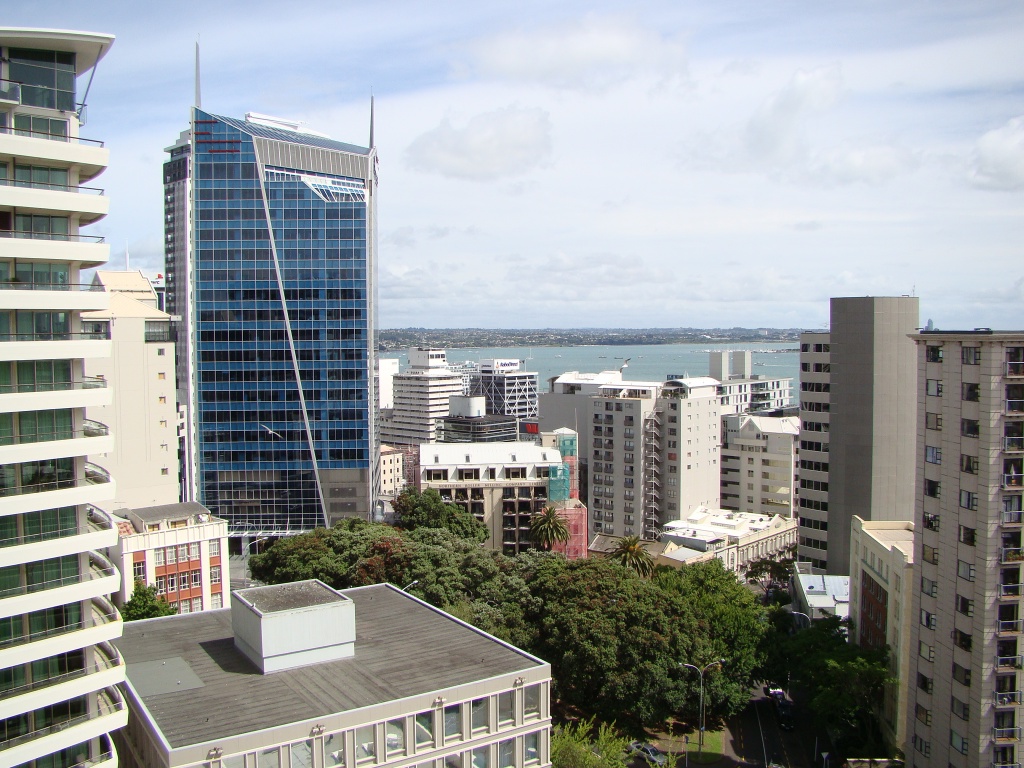 With 3 days left in New Zealand, we headed further north towards Auckland for another urban experience. The metropolis is the country’s largest (population 1.4 million), and served as its capital for years (prior to moving to Wellington). The city’s defining feature as seen even from miles away is the 1,076-foot tall Sky Tower, which we noticed on our approach from the highway. Also notable was the elevation of the sprawled out city as it’s situated amongst dozens of volcanoes (many of which are still active).

We had been lucky thus far with the weather in New Zealand despite periodic cool temperatures and some wind, but Auckland showed no mercy. Overcast skies, rain, spotty sunshine coupled with wind was what we had. This somewhat relegated us to spending more time indoors at the movies and the museum, as opposed to doing day trips to some of the numerous nearby islands. We got comfortable with the idea of settling for the more cultural experience and looking on the bright side, we probably saved a little money too.

On our second day we did end up doing an excursion thanks to Anne and Steve (Anne is the cousin of one of our friends from New York and she suggested that we link up). We met up with Steve in the morning and drove out to their town of Piha, on the western coast of the North Island. The drive grew increasingly more scenic the further we got from Auckland. Thick forests, a winding road through the hills and a beautiful coastline manifested themselves. One of the things we noticed about New Zealand (even close to the cities), is how lush and full of vegetation it is. As Steve told us this is partly attributed to the fact that much of the land belongs to the Maori and it’s deemed sacred. This means some areas cannot be cleared for construction, unless approved by a tribe and its chief, which we thought was great. Once we got to Steve and Anne’s, we chilled on their outdoor deck and took in the expansive coastline views while getting to know each other a little better. Shortly thereafter Brigitte and I took to the beach and enjoyed a long walk on the super-fine black sand (which can get very hot; at one point I found myself running to the water’s edge for cool salvation – yup, I have sensitive feet). But overall the water was too cold (after all, we got totally spoiled by bath-warm seas in Australia and SE Asia), so we didn’t swim. Instead we scaled Lion’s Rock, a prominent rock formation sticking out into the sea. Lion’s Rock is vital to Maori culture and ancestry. Upon reaching its high point, we came across a symbolic Maori statue and enjoyed the amazing views from atop. There was something ruggedly beautiful about the volcanic landscape intermingling with the sea. Later that evening Anne dropped us off in Ponsonby, a more suburban Auckland neighborhood littered with restaurants and cafes. SPQR was the setting for a delicious dinner accompanied by a traditional local dessert – date cake – YUM!

The next day would be our last and we decided to walk around town and check out the main museum – Domain. Once again we delved right into the rich Maori culture exhibits and virtually walked through time to modern day New Zealand. This country has a beautiful yet complex cultural identity that as tourists we felt fortunate to experience and appreciate. There were a few other key exhibits in the museum from natural history, to major wars, animals (present and extinct), to an interactive children’s playpen. We could have easily spent an entire day in the museum but we were intent on catching the 5:00pm Puss in Boots in 3D (finally!). After the show, we sheltered ourselves from the rain in a couple of pub/restaurants on Vulcan Lane. We simply loved the pub fare at O’Carroll’s (we went there on two occasions), and naturally also just had to stop in next door at Queen’s Ferry Hotel, or the oldest pub in Auckland (1865). The mellow rainy night sort of felt New Yorkish, perhaps inherently hinting at the fact that we would be in New York in just a few weeks. But a quick reminder that the next day we would be flying to sunny Fiji totally zapped that New York feeling away.

Next Day at Airport: As many of our friends know, our luck with flights over the past few years has been hit or miss, mainly miss with some colossal headaches as a result. But so far on our trip everything had gone surprisingly smooth (maybe it’s the US airline industry that sucks), until we got to the airport and could not find our flight listed anywhere. A blast of panic came over us as we wondered if we screwed up the dates or whether the flight was actually cancelled. Given that we had a boat to catch early the following morning, we just had to get to Fiji that day. So Brigitte ran over to Air Pacific’s office and learned that in fact our flight was moved to 1:00 in the morning due to a faulty plane. Not a good scenario by any means, in fact a horrible alternative given it was only 10:00am and who knew for sure that the 1:00am flight would even go. More panic!! But, the lady at Air Pacific informed Brigitte that there was an 11:00am Air New Zealand flight that she could probably get us on. And she did! So now we ran to check in our bags at which point we found out that we needed to present not only our boarding passes to Fiji but out of Fiji as well. Of course we did not have the latter printed out so we frantically tried to find the confirmation email on Brigitte’s blackberry. With the clock ticking away and the blackberry’s toad-like loading bar barely moving, we found ourselves not making any real progress. It was time for another dash to Air Pacific’s office and after about 10 minutes Brigitte emerged with the elusive paperwork. Our bags were finally checked and we had received our boarding passes, so it was time to pass customs followed by security. Minor detail – we had to fill out our departure customs card (frantically of course), as we waited on the customs line. By now it was 10:30am and the Departures monitor indicated that our flight was closing. F! But somehow the line moved quickly and we darted through customs and then had to place all items including metal objects, phones, wallets, belts, hats, laptops, etc, in the provided trays in order to pass through security. I think we accomplished this in record time. Then we managed to grab everything and dash to the gate in hopes that it was still open.. after a good sprint that rendered us breathless, we finally saw a large crowd of passengers boarding our plane. Oh my God, we made it!! We boarded the plane among the last passengers and found our way to our business class seats.. really! Did the lady at Air Pacific not just get us on this flight, but actually hooked us up with premium seats? To our delight that’s exactly what she did so enjoyed the 2:45 hour flight in style with a gourmet meal and some Sauvignon Blanc. Kia Ora to the Air Pacific lady, we are immensely grateful.