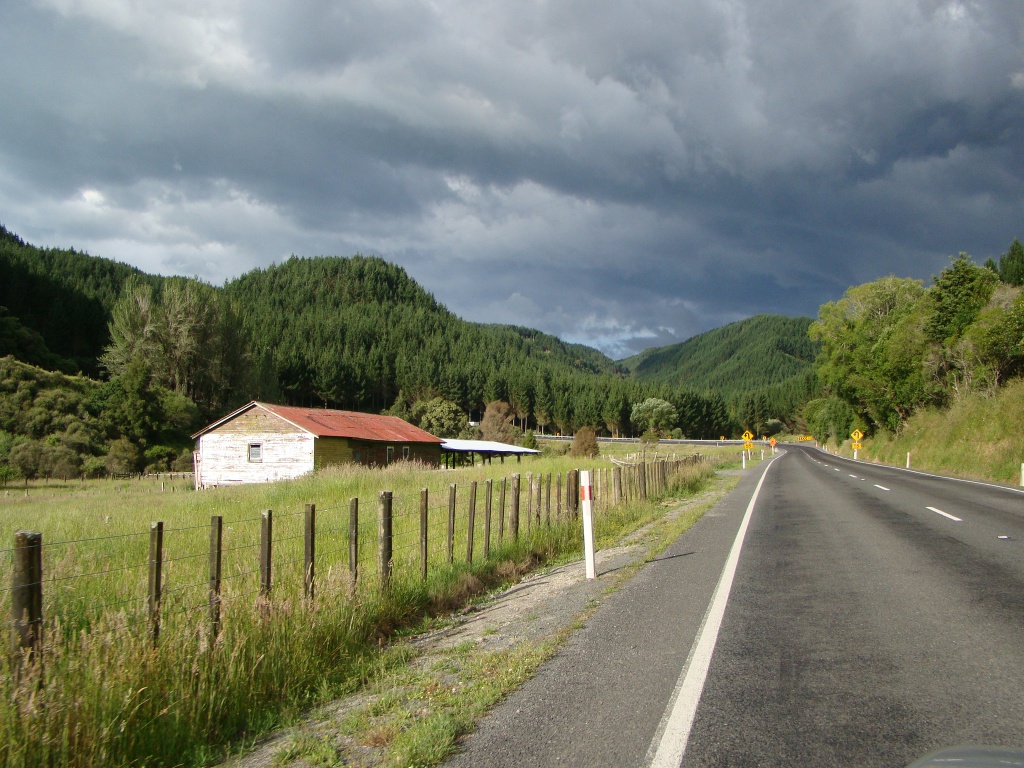 Coming to New Zealand was an easy decision. Picking the North Island was not so easy, especially after hearing from everyone that the South Island was more beautiful. But with only 11 days at our disposal we put our money on the North and chose to make the best of this hyper-volcanic island.

After 4 days in the capital, we headed towards the Tongariro National Park (the oldest park in New Zealand), which is located in the middle of the North Island. The park consists of 3 main volcanoes and a 12-mile alpine crossing that’s considered to be the best day hike in the country. Needless to say we wanted to see what the hype was all about. The hike usually takes 7 – 9 hours to complete and includes an ascent of over  6,100 feet. I’ve never been on a hike that was longer than a couple of hours, so I wasn’t sure what to expect from our day ahead. The hike started out on flat terrain for the first 1 – 2 hours which was all gravy. We enjoyed the cool breeze on a beautifully sunny day with few clouds in the sky. All around us volcanic rocks covered the landscape with patches of intermittent vegetation. Then for the next hour or so we hit a taxing incline where pausing every few minutes became the norm. But with the altitude came the intimate and real beauty of the surroundings. The inhospitable landscape put on its best impression of a lunar surface – grey, dusty and volcanic. To our right stood Mt. Ngauruhoe, a 7,500 foot tall active volcano, tempting some of the more seasoned hikers towards its lips. We admired their efforts and watched them get reduced to the size of peas on their way to the top. But for us it was “March on” continuing on our trail to the South Crater, where a huge plateau posed as a very welcoming sight. No more climbing.. at least not for the ensuing half hour. Crossing through marked the mid-way point of our hike but also the start of another and more rugged incline. Slowly we pushed on and came face to face with the Red Crater, a smaller opening that lived up to its name. Reddish in color and partially torn (at what appeared to be lips), the crater served as a reminder of the area’s furious spit-up many many years ago. Although no major eruptions have occurred in the area since 2007, these were still active volcanoes which was pretty amazing – functioning ears and mouths to the inner rumblings of the earth. Passing through marked the highest point of our hike and so it was all downhill from there. This of course made us extremely happy. To accompany our elation, the afternoon’s most magnificent panorama came to life. 3 bright-green sulfuric lakes lit up the landscape and drew every hiker’s maximum attention – so majestic yet so treacherous. The beautiful lakes (known as the Emerald Lakes) are devoid of life because of the high sulfur content which filled our nostrils with that rotten egg smell. A perfect spot for lunch! The view trumped the smell and so we paused for 10 minutes to refuel and take it all in. This was volcano country, no doubt about it. The rugged landscape extended in all directions with severed mountain tops competing for top volcano. The distant snow-capped Taranaki took that title, adding to the incredible setting. Our descent lasted about 2.5 hours terminating with an animated hike through the bush. By this point our feet were ready to burst while our legs felt like cement blocks. But we stuck it out and completed the hike in 7 hours. Brigitte’s “post-game” rap was that this was more exercise than she had done all year. I was genuinely proud.

The following day was Christmas but fortunately not everything was closed. So we set out to see the nearby Waitomo Cave which is home to luminous and unique glow worms. These little creatures are endemic to New Zealand and Australia and live in complete darkness. Seeing thousands of them light up parts of the cave was much like observing infinite amounts of stars speckle in the night’s sky. From a timing perspective all this played nicely into the whole Christmas sparkle theme. The rest of our day was mellow, we cooked and enjoyed Christmas dinner at our hotel while thinking of our families and friends.

The next morning we made our way to the Wai-O-Tapu “Thermal Wonderland” in nearby Rotorua. This is a fragile area that’s covered with craters, sulfuric pools and bubbling boiling water that formed over a period of hundreds of years. On the eyes, the landscape was grey, rugged and steamy. On the nose it was unpleasant but we had no choice other than just deal with it. Overall it was interesting to see so much raw activity and smell it. One of our favorite spots was the “Champagne Pool”, a very large steaming green sulfuric pool that appeared bright orange at its rim. The other notable pool was the “Devil’s Cave” with its un-natural highlighter yellow color.

Later that afternoon we visited Te Wairoa, a buried village that fell victim to the eruption of Mt. Tarawera in 1886. The story as told in the museum was quite tragic as many died and the entire village was wiped out. After the museum we got to walk the grounds where actual homes and places of business once stood. It’s crazy to think that the eruption had such a devastating impact.

As our day was coming to an end, there was one last thing to check off the list. Brigitte wanted to do the Zorb as seen on The Amazing Race. Basically you get to roll down a hill while being strapped inside of a giant ball – kinda like a human hamsterball. I decided to pass on this so I just took pictures and shot video as she tumbled down the hill. She said it was dizzying fun which left her disoriented and wondering if the ball would ever stop. I commended her dare devil spirit. And why not, after an exhausting hike the other day she deserved a little roll down the hill.