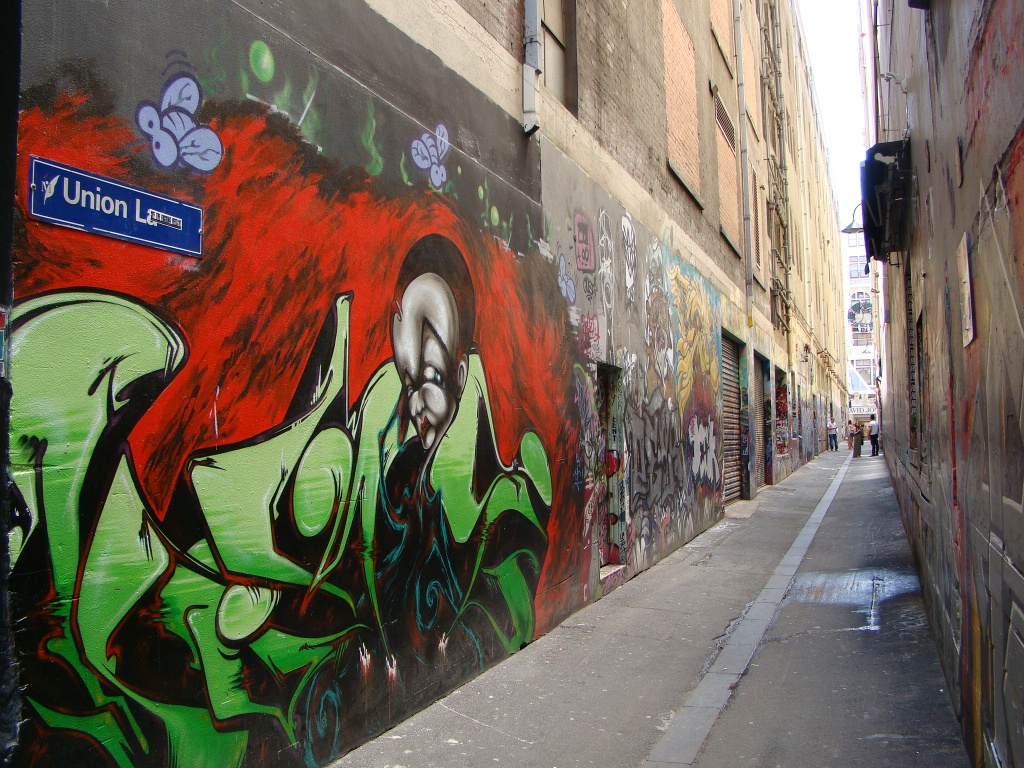 With 4 remaining days in Australia we popped into Melbourne, another impressively modern and large metropolis (Australia’s second largest city). Melbourne has a population of 4+ million and has one of the largest ports in the Southern Hemisphere. Thousands of early immigrants passed through here as they made their way into Australia. Today the city is very diverse and our plan was to immerse ourselves in its prominent cultural, social and food scene. Aside from that, Melbourne also has a tremendous sporting history and is home to a number of domestic and international competitions (from local rugby, cricket, Aussie Rules Football and soccer teams to tennis’ Australian Open). But the other thing the city has which we found to be brilliant, is a free tram service designated mainly for tourists. The trams themselves are actual vintage specimens from the 1930s/40s and they run a circuit around the city’s perimeter. Information is provided over the PA about key landmarks, the city’s history and other points of interest. This was a great way to get an orientation of where things are, and also learn about Melbourne’s past (I wish more cities would provide a similar service). After doing the circuit (on the City Circle Tram), we then took the city by foot. Melbourne is very modern and this is reflected not only in some of its architecture but also in its street art (which was fun to spot and photograph). Adding to that was the abundant street graffiti that covered entire inner city lanes (or small connecting streets). In this realm Melbourne definitely ranks high not only in terms of volume but also creativity. We had even stumbled upon some in the making (kind of a rare occurrence), but didn’t stick around too long because of the emanating spray paint fumes. So from there we made our way to Victoria Market, one of Melbourne’s must-see points. The sprawling consortium of shops within the covered market was a bit overwhelming but we had gotten plenty of practice in Asia. You could find anything there from clothing to souvenirs, fruit, jewelry, etc. Even though a few things like cool t-shirts, boomerangs and other Australian souvenirs titillated our “must buy” sensors, we knew better and resisted. After all we’re just backpacking and only have so much room.

Later that afternoon (after having done more city walking), we decided to make our way out to St. Kilda, one of Melbourne’s popular suburbs (that’s on the water). The weather was beautiful and we wanted to see what the buzz was all about. St Kilda is littered with restaurants, bars and cool shops and we definitely picked up on the neighborhoody vibe (which we liked). It also has Luna Park, an amusement park (similar to Coney Island), with the oldest active wooden roller coaster in the world (and I thought Coney Island owned that claim). But the other noticeable factor was the beach scene, a predominantly testosterone-ridden high-school/college presence that seemed very “Jersey Shore”. Not sure if this is always the case but it made sense with schools being out for the holidays. Nonetheless we really enjoyed St. Kilda and settled in for a delicious dinner there after hanging out with some locals for a few drinks.

The next day’s game plan was quite different. We had signed up for a Yarra Valley winery tour and took to the country. The ride out (via coach bus), was scenic especially with the good fortune of another clear, sunny and hot day. The Valley’s rolling hills and dense forests gave way to the sloping vineyards, setting up an artist’s landscape. Our tour included tastings at 3 different wineries but it wasn’t until the final one that we came to fully appreciate our slow day. We had grabbed a table outside nearby rows of vines as blue skies stretched in all directions and the sun beamed down. Instinctively we sipped rosé from our frosty glasses pondering what better way to spend the day?

The next day was Sunday, a very special day. Unfortunately the weather wasn’t the best so as a result we saw a couple of indoor attractions. We did a morning tour of Rod Laver Arena, home to the Australian Open. It just so happened to be the last day of tours (as the Open is just 4 weeks away). One of the things the arena is noted for is its retractable roof, a first of its kind in modern day tennis. Preparations were in full swing for the Open and this was evident throughout the arena. Our tour took us through the men’s locker room where we saw the lockers of Federer, Nadal and Djokovic. It’s funny how they themselves picked them (in 3 different areas of the locker room), to avoid seeing or confronting  each other. I suppose they want to save it for the court. The tour was very informative and our guide was excellent, which made it fun for everyone. It was amazing to learn that the men’s final tickets regardless of seating are all uniformly priced at around $380 each. And so, apparently they sell out within 5 – 7 minutes of being released.

Our next stop was the Old Melbourne Gaol, a 19th century city jail that’s loaded with history and horror. It was Victoria’s largest jail and one of the most important in the country. Hundreds of men and women were incarcerated here and 135 of them saw their end by hanging. The jail retained its notorious look with the banal mustard yellow walls and corridors, tiny cells with thick padlocked doors, and that eerie feel of a very dismal place. The living conditions (or more like surviving conditions), during the 1800s were pretty terrifying. Among those hanged at Old Melbourne Gaol was “bushranger” Ned Kelly, one of Australia’s most notorious outlaws known for robbing banks and killing policemen. His story was prominently told in a few cells through a very well done montage. The jail went out of operation in 1924 and the last hanging occurred that same year. Visiting the Old Melbourne Gaol put in perspective how little it took for people to get sentenced to time in prison back in the old days (from minor offenses to capital crimes). It was also frightening to see how the jail system was operated.

As the evening approached we grabbed tickets to the Mission Impossible 4 movie which kicked ass. Puss in Boots was unfortunately sold out so we settled for Cruise and crew. Right after, we made our way down to the Southbank for a waterfront dinner. This is a great strip of back to back restaurants which offers a gorgeous night view of Melbourne’s skyline – so we took it all in one last time. Brigitte went with the snapper and I elected the ribs, both were yummy and very filling. We slowly also savored a bottle of Sauvignon Blanc with which we toasted Brigitte’s 35th birthday.

The next day was our last in Australia so it was only fitting that we visited the Immigration Museum which told the story of how Europeanized Australia came to be. We learned about the numerous waves of migration through incredibly vivid displays, films and relics of those who sacrificed everything for a new life in Australia. Various exhibits painted a clear picture of the hardships involved in emigrating to the new country, especially during the early waves (1815 onwards). Others focused on Australia’s modern cultural and ethnic diversity, making the country an on-going melting pot. Another key component was the Aboriginal tale, a very muddied tale starting with their atrocious decimation at the hands of European settlers, to their survival in today’s Australia. This is yet another tale that history cannot afford to forget and neither shall we. We both really enjoyed the museum and it personally touched me as I too am part of a 1st generation emigrant family. As an adult now I can fully appreciate the sacrifices my parents made (24 – 29 years ago).

The time had come to bid a heartfelt farewell to Australia after 3 amazing weeks. I hope one day we can return and explore further, much much further..