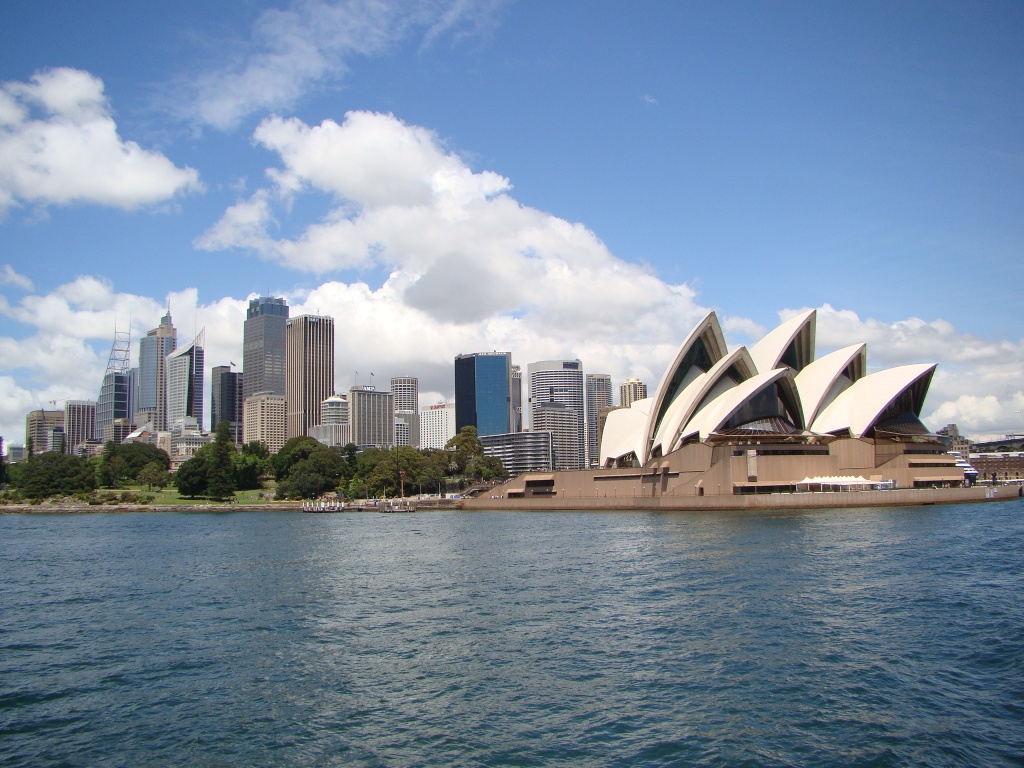 Sydney, capital-grade city but not exactly Australia’s capital. The coastal sprawling metropolis is home to 4.5 million people and was the next stop on our trip. We planned for 4 nights there and were excited to see the city that’s always “first” to ring in the new year.

December in Australia marks the beginning of summer but Sydney greeted us with unseasonal temperatures and rain (60s and 70s Fahrenheit). In fact this is their coldest summer in 51 years! But this didn’t bother us at all, not after having enjoyed summer-hot weather for the last 4 – 5 months. It simply meant more indoor activities and that was part of the prescription for our first day. Our hotel was located near the Central Business District (CBD) and we started there. The over-saturated corporate scene was reminiscent of midtown Manhattan and so were the many store-window Christmas decorations and large Christmas Tree at Martin Place (although to a far more subtle level). The only blow-out was the Town Hall itself, a nightly projection speckled the building’s facade with a jolly mirage. It was very well done and definitely uplifted our holiday spirits. Not too far from Town Hall was Hyde Park, a beautiful and centrally located patch of green full of impressive trees and bird-life, and home to the ANZAC Memorial which commemorates Australian and New Zealand troops who served in WWI. The Art Deco style memorial really impressed us with its simplistic yet powerful motifs (like the golden star-studded dome: there are 120,000 stars – one for each serviceman and woman).

With the overcast weather still lingering and not allowing for many expressive pictures, we made a pitstop at the Numismatic Musem followed by a visit to the Powerhouse Museum. The Powerhouse, a grand old warehouse building was host to a number of interesting and interactive exhibits, among them one on lacework (a first for us). And I never thought I’d say this about lacework, but it was actually really cool. The other exhibit that touched me was that of transportation, a showcase of various vehicles – trains, automobiles, planes, bikes, etc from the last couple centuries. After a culture & science infused afternoon, we made our way to Jones Bay Wharf for a drink at Flying Fish (a chic waterfront restaurant/bar that came recommended by one of our friends, thanks Sarah!). Everyone there seemed local and very much part of the “in” crowd. The surrounding views of the harbor could impress (especially on a beautiful day), and so we kept our fingers crossed for sunny skies for at least one of our remaining days.

The next day blessed us with those elusive blue skies and perfectly played into our plan of seeing the Opera House and Sydney Harbor Bridge, two of Australia’s most iconic symbols and architectural marvels. The funky turtle-shell like opera house is certainly one of a kind which explained the hoards of tourists all around it. From there we hopped on a ferry to Manly Beach, a highly recommended attraction and one of Sydney’s suburbs. So picture this: a picture-perfect day, a picture-perfect beach and a picture-perfect burger (from BenBry, one of the best burgers Brigitte ever had and one of my top 3 easily). That was pretty much the line-up for our afternoon. The scenic ferry ride to Manly Beach took us past some of Sydney’s luxurious waterfront villas, uninhabited islands, and impressive cliff coast line. This city has it all! And on top of it Manly’s turquoise waters, powdery sand and surfers scene amplified the effect. What a setting, and all this just a 30-40 minute ferry ride from downtown Sydney. After our suburban beach escapade we checked out The Rocks, one of Sydney’s oldest neighborhoods. The colonial-style brick buildings spoke of the city’s maturity. And this is where we found “Fortune of War“, the city’s oldest pub so it was only fitting that we grabbed a “schooner” of beer (that’s Australian for mini pint or something like that). Later that evening we had dinner with Brigitte’s uncle Freddy and wife Evelyne plus their children (Karla and Michael), an auspicious gathering after 20 years of not having seen each other. There was a lot of catching up to do over what was a delicious Chinese food feast. Thanks again uncle Freddy and aunt Evelyne!

The following day had Bondi Beach written all over it despite the overcast morning. Bondi is Sydney’s most popular beach and a trip there was simply inevitable. We rode the bus out and then took to the finely granulated sand. The scene was similar to Manly: beautiful blue ocean with surfer riding waves crashing on shore. The book-end cliffs delineating Bondi were not only stunning but painted a centuries old picture of how the coast appeared to early European explorers. By now the sun was fully out but the water was still cold. Instead of taking a dip, we took the scenic walk on the coast towards Bronte Beach. And to my amusement this was it – the defining moment – discovering Sydney’s true allure much like those 16th century Europeans uncovered Australia’s beauty. We took front row seats to nature’s spectacle and watched as waves crashed against the rugged and intimidating coastline, creating a foamy white blanket around the mighty and stubborn rocks. A millennial old game, probably with nominal effects but nonetheless eternally beautiful. This was a true battleground, the ocean’s unrelenting assault on land, a defining characteristic that (in my mind), quickly propelled Sydney to one of the most amazing city’s I’ve ever seen.

Later that afternoon/evening we wondered around Surry Hills and Darlinghurst, two other areas of Sydney where we felt very much “at home”. Neighborhoody Surry Hills was where we found a cool Italian wine bar and enjoyed an aperitif during a mellow Sunday afternoon. We almost felt as though we were back in Brooklyn, but the only part missing of course was our friends. For dinner we took another one of Sarah’s recommendations and got our chow on at Cafe Ish. The tapas style Japanese meal was our favorite in Australia and one of the best on our trip. And we finally had a chance to eat kangaroo, a tender and savory meat. Thanks again girl!

The following morning would see us off on our 1,000+ kilometer (approximately 600 miles), drive towards Melbourne. For now, good bye and thank you Sydney!