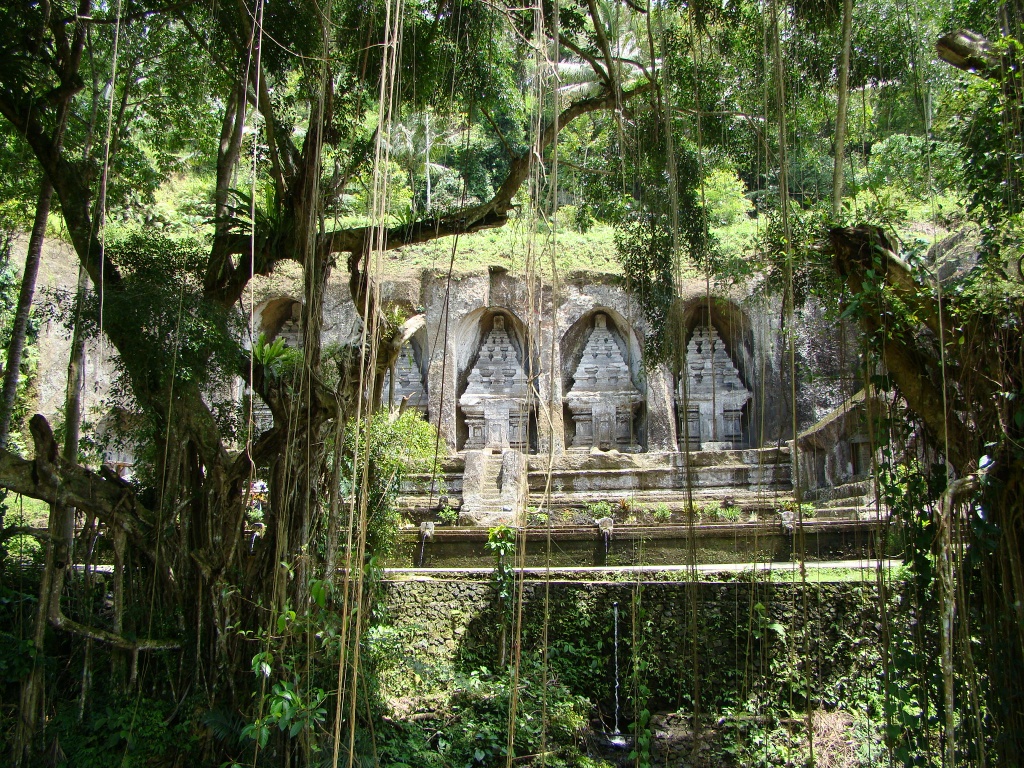 Making the transition to Bali’s countryside was seamless. After 3 days of lounging on the beach, we headed northeast for the town of Ubud (or Bali’s cultural epicenter). Located in the middle of the island of Bali, Ubud is surrounded by incredibly lush tropical vegetation and continuous rice fields. It’s home to 30,000 people and is renown for several things among them: woodcarving and sculpting, a vast array of shops and an incredibly eclectic food scene as we found out. It’s the kind of place that – at first sight – emanates a warm welcoming feel, a country escape that inspires dreams. Also dreamy was  the view from our hotel room at Tegal Sari (a wedding gift courtesy of Izabel and David – thanks again guys!), which faced a patch of beautiful rice fields accented by a few palm trees. Each day we’d find ourselves fixated on the fields at times tended to by one or two lonely farmers. But even more memorable were the gangs of ducks that spent their entire day in the water rich fields. Every evening about a half an hour before sunset they would line up single file and walk back into their communal cage (where they spent the night). It was a simple yet amazing ritual leaving us to wonder what triggered their single-file formation and how they knew when it was time to return “home”. Brigitte found this episode to be very cute and captured it in pictures for her niece. But the thought that came to my mind was that finally we bore witness to the meaning of “getting one’s ducks in a row”.

Most of the countryside around Ubud is totally rural as we found out from the eco bike tour we had signed up for. Rolling through numerous small villages separated by rice fields and thick tropical forests was a wonderful way to spend a day. In total we clocked in over 15 miles although it was mostly downhill (which made Brigitte especially content). The tour had started with a “power-up” breakfast at a scenic restaurant overlooking Lake and Volcano Batur – wow, what a view! Part of the landscape around the volcano was still blackened, a scar from its devastating eruption in 1965, that destroyed a village in its path and killed many. But the spirit of the area persevered, its beauty lives on and continues to awe the ever incoming tourists. The tour continued to guide us through Ubud’s heartland and exposed us to the area’s natural beauty, cultural prowess and one of Bali’s most curious products and popular exports. The fabled “Luwak” coffee, a natural product that comes from civet’s poop is quite compelling as we learned at one of the plantations we visited. These civets feast on raw Arabica coffee beans and later excrete the beans whole (after they slowly pass through the animal’s digestive system). Then, the “poop hunters” as our guide put it, go in and cherry pick the coffee beans out from the unwanted poop. After washing, drying and roasting them, these intriguing little beans yield some of the world’s most expensive cups of coffee (a pound of Luwak Coffee sells for hundreds of dollars!). Best of all we had a chance to taste it for only about $7 a pot. But since neither of us are real coffee drinkers our opinion of it (it was good), may not be the most accurate.

The other amazing aspect about Balinese culture was its people. Their traditions and religious beliefs are firmly rooted in everyday life and we experienced this first hand. As we had seen from the bike tour Hindu temples were omnipresent throughout villages and towns. Each living compound has its own temple, many of which were elaborately decorated. But it was some of the larger communal temples (which we saw on another day tour), that really stood out. The 11th century Gunung Kawi temple carved into the face of a large rock was a great example. Also memorable (painfully so), were the 371 steps we had to climb back up upon exiting the temple compound in the arduous heat and unforgiving humidity. We should’ve packed a second set of t-shirts! Luckily the next temple we visited (Tirta Empul), didn’t require any stair climbing so we managed without too much of a sweat. It serves as one of the most significant temples in Bali and many Hindus make pilgrimages to it. There is an actual hot spring on-sight which is highly revered for its “powers”. Several fish and an eel swam through the spring’s pool as bubbles rose to the surface directly from the earth. In a separate area of the open air temple compound there was a pool with a series of fountains (with water being supplied by the hot spring), each designated to either cure illnesses or just cleanse people. Overall this was a very unique temple in its composition but the pools were somewhat reminiscent of other ancient Hindu temples we had seen earlier in our journey (i.e. Angkor Wat). The last one we visited was Goa Gajah, a cave temple dating from the 9th century with an impressive elephant facade/entrance. The three distinct temples provided a good sense of Hindusm’s various architectural flavors in Bali as well as its deep roots.

Aside from the religious aspect of Balinese culture, we also found it to be very spiritual. In fact it’s very animistic in nature and takes into account that many things and beings are sacred and have a soul. One of the animals that plays an important role in Balinese spirituality and actuality is the monkey. Lucky for us our hotel was situated on Monkey Forest Road which meant that we visited our distant cousins in their natural habitat (the Monkey Forest). It was amazing to see how they interact with people given that most visitors feed, photograph and play with them. They come up to people and inspect them for food. If they detect anything edible they then lunge for it or try to snatch it away. At one point a girl with a hand full of bananas got rushed by a couple of monkeys who ended up grabbing her hair as she shielded the bananas away – bad move. They were very direct about their intentions and usually got their way from what we saw. But unlike the somewhat aggressive monkeys, we spotted another local animal that was far more docile although venomous. I never imagined what a spider would feel like crawling up my arm and my face only to park itself atop my head. But thanks to a cool giant wood spider I found out exactly how.. graceful. Similarly, the traditional Balinese dance performance we checked out on our last night in Ubud was also full of grace. Several dances were carried out depicting mythical tales containing very colorful costumes and makeup. From the musical instruments to the dances themselves the show was quite unique. We had come to Ubud for culture and we checked-out extremely satisfied.

After 4 amazing days it was time to move on. We had grown very fond of Ubud and knew we’d miss the culture, the food, the people and the $9 hour-long massages by the pool.. Terima Kasih Ubud!