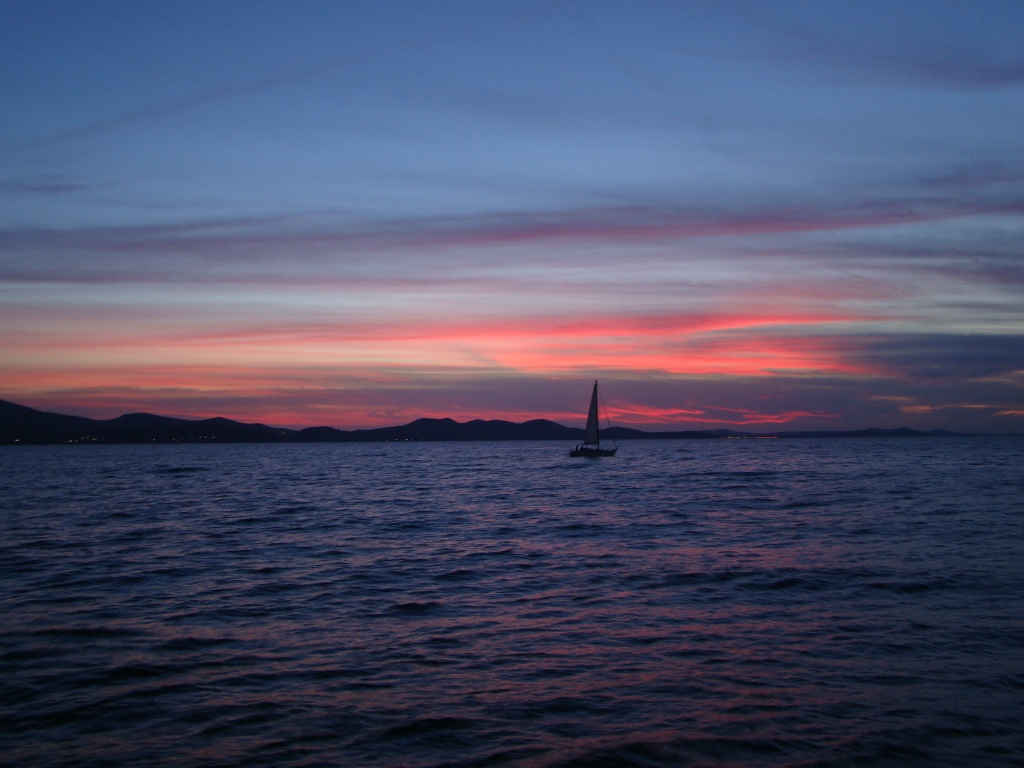 I’ve known my friend Tony for about 14 years and one of the most accurate and honest things he ever told me was “get ready to be wowed”! This of course was in reference to visiting Dubrovnik. Tony is Croatian (naturally), so he compiled a comprehensive list of To Do & To See Croatia for us. Our expectations of the old city were A-grade and Tony’s succinct advice only elevated them to a higher degree.

Right before entering Dubrovnik (while riding the coastal road from Makarska), we stopped for lunch in Zaton – a small town just 6 miles away from Dubrovnik. Waterfront is a term frequently tossed around in Croatia and can refer to a variety things. In this particular case, our restaurant along with our table and even our car were all “waterfront”. By now we had gotten used to having a waterfront meal followed by a dip in the crisp Adriatic and this instance was no different. Lunch was tasty and the sea pumped us up for Dubrovnik.

At first sight the old city’s imposing fortified wall spoke of its historic conflicts but also implicitly gave hint to the treasure it protected for centuries. Dubrovnik dates back to 7th century when it was initially settled by the Romans, and over the centuries saw itself falling through the hands of various empires (Roman, Byzantine, Venetian, Ottoman and Austro-Hungarian). But it was the Croats who persevered culturally and ethnically and today make Dubrovnik one of the most visited European destinations. Making our way into the old part of the city we found ourselves on Placa or Stradun Street, a principal artery that starts and ends with significant monuments/landmarks at each end (the Onofrio Fountain dating back to the 15th century and still providing the town with potable water from a spring several miles away – and the Ploce Gate). The avenue-like street is uniformly lined with Venetian style architecture and limestones (smoothly buffed to perfection) paved the floor. Narrow alleyways dissected Placa street where many of the city’s restaurants and bars were found. An interesting thing about Dubrovnik is that part of the old city extends up a hill with half the city streets escalating upward. Climbing hundreds of steps on any given day is simply part of everyday life there. After  dinner the walk up 150+ steps was pretty invigorating or consoling to the rich desert that followed our meal. Our choice for a restaurant (Orhan at the base of Fort Lawrence), came as a recommendation by Frano (D’Vino’s bar manager), while stopping by for a pre-dinner wine tasting. He enthusiastically walked us through our tasting with expert knowledge and a chill attitude that brought us back the following night. Dinner at Orhan was delicious – green fettuccini with salmon was Brigitte’s choice while seafood spaghetti tickled my tastebuds.

We kicked off our next morning with a visit to the War Museum located on Mt. Srd which overlooks Dubrovnik. The strategic location is where the communications tower is based as well as Fort Imperial. The fort (built and commissioned during Napoleon French rule of Dubrovnik), is where the museum was placed and vividly depicted and informed us about the Serbian & Montenegrin aggression towards Croats during the 1991-1995 War (after the breakup of Yugoslavia). During the war, the fort and communications tower received heavy damage and then it became evident that Dubrovnik was an inevitable target as well. Hundreds of buildings were damaged and 80+ people were killed as a result. Since the war, Dubrovnik has been undergoing major reparations and today presents itself in proud historic form. There is a plaque in the old city that indicates the 70-percent of buildings that suffered some damage. It not only serves as a reminder of a ruthless assault but also Dubrovnik’s will to persevere. The museum was sobering and afterwards we enjoyed the best views of Dubrovnik from the fort.

As the most prominent feature of the old city (from any vantage point), the city wall offers a 1.25 mile walking tour. We grabbed an audio guide and made our way along the rectangular-shaped wall passing by several bastions and forts that protected the city. The eastern side of the wall (our favorite), faced the sea and was the most popular spot for picture taking. Brigitte snapped over 230 pics that day thanks in part to the wall. Also remarkable were the thousands of bright orange new tiles symbolic of the damaged buildings during the 1991 war (the older looking tiles denoted houses that escaped the siege – and they were far and few in between). The 2 hour tour in the scorching afternoon heat naturally made us crave the sea.

The rocky (mostly locals) beach right outside the old city was our refuge for the next couple of hours. It even had waterpolo goals set up so I was ready to relive my childhood dream of becoming a waterpolo goalie. One of the local boys took to my calling and we tossed the ball around. Most of what he threw my way made its way past me but on several occasions I did manage a few saves without gulping too much saltwater. It was exhausting but also exhilarating. Brigitte (half laughing at me), enjoyed successive dips in herself in combating the hot day.

In the early evening we circled back with Frano at D’Vino where he put us on to a couple of new wines which we loved. My man knows his wines and it was great to get some local perspective on things. Speaking of which, for dinner we referenced our friend Tony’s recommendation for restaurants and went with Lokanda Pescarija overlooking the harbor. This the same place where Tony and his wife Kelly, had dinner 2 years ago. Grilled squid and grilled octopus comprised our order, and we fought our way through the battalion of mini mollusks while enjoying our waterfront view. After dinner we took a walk around the harbor before gingerly climbing the 150+ steps back to our apartment.

We woke up the following morning and instinctively glanced out the window into the horizon met by the Adriatic and the sky. It would be a lamenting goodbye to Dubrovnik, for now anyway.

The next day we drove north for several hours to the coastal town of Zadar. We spent our last day in the ancient Roman town and got familiar with it. Aside from the numerous Roman ruins displayed in open air and accessible to the public (interestingly enough), the sea organ was the other main attraction. Submerged under water, the organ is stimulated by sea waves and sounds off  drawing hoards of quizzical tourists to its location. From there we enjoyed a walk along the promenade watching the amazing sunset (Alfred Hitchcock once said that the most beautiful sunset he’s ever seen was in Zadar). Making our way back home constituted a 4 minute rowboat ride across the channel which divides Zadar’s old town from the new.