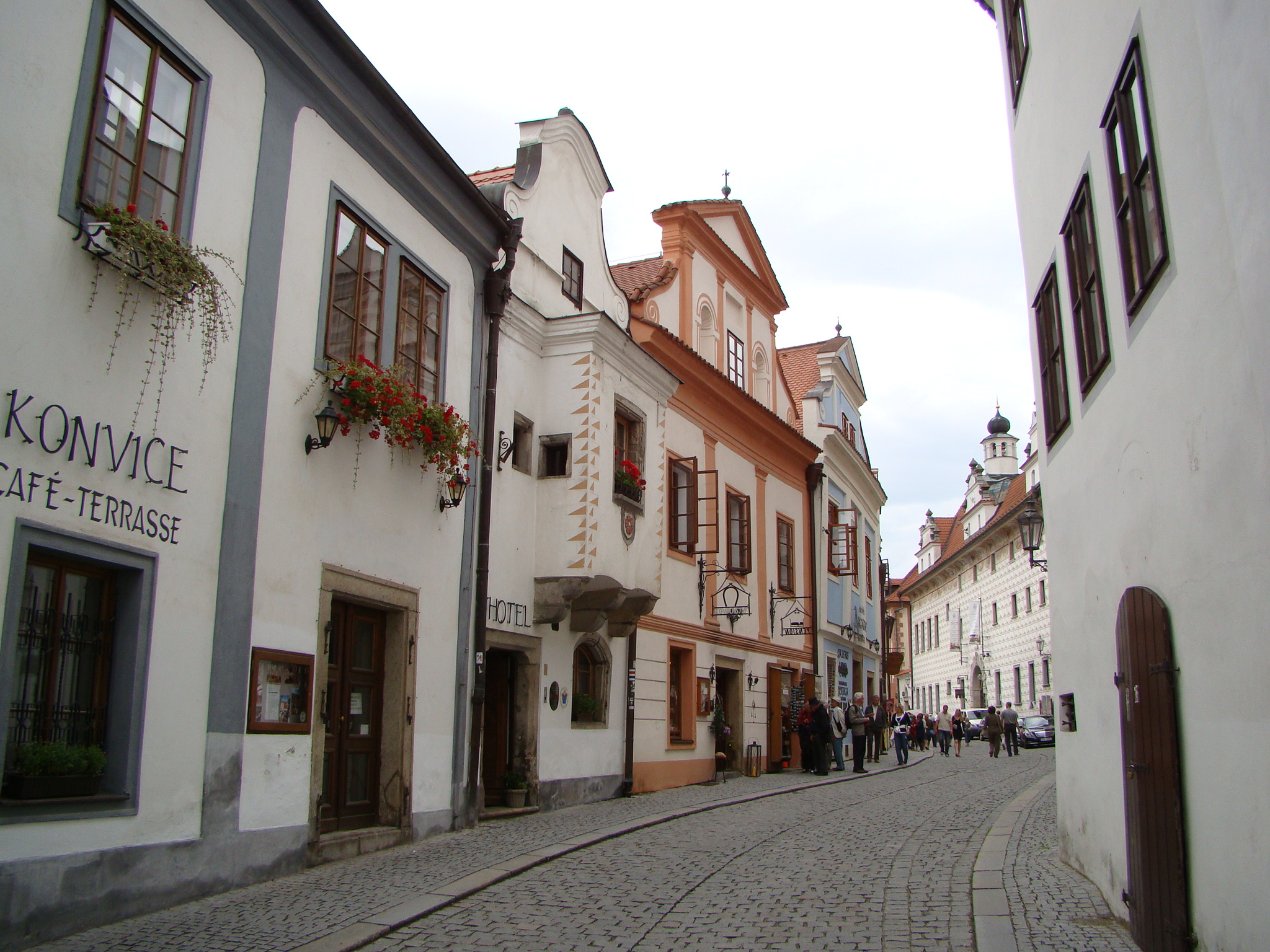 With 4 days at our disposal in the Czech Republic we researched a few day trip options and there were plenty. We narrowed down our list to the Karlštejn Castle and the medieval towns of Kutná Hora and Český Krumlov.

Karlštejn Castle was about a 30 minute drive southwest of Prague. The road took us through a picturesque countryside with fruit trees lining both sides of the road – apple, pear and plum. Upon arriving at Karlštejn we had to strain our necks and look upward several hundred yards to see the imposing castle. The hike up wasn’t too bad, and a couple of minutes before 11am we purchased our tickets for a guided tour which started on the hour. We were a few minutes late and so I got to pound the knocker against the door but with excessive umph (I really startled the entire group inside and probably gave Brigitte and I a poor image of us late Americans). The tour was informative and provided good insight into Charles the IV, the king of Bohemia who also became Holy Roman Emperor. Bohemia was quite an empire and stretched across vasts lands including parts of modern day Czech Republic, Slovakia, Austria, Germany, Luxembourg and Italy. Overall Karlstejn was an interesting reminder that just a couple hundred years ago kings and queens ruled across the lands. After all, the Czech Republic is a fairly new nation (Czechoslovakia was formed in 1918 after the conclusion of WWI).

Next up was Kutná Hora, a 12th century medieval town situated in Bohemia (the western part of the country – at one point this was the second most prominent town in the Kingdom of Bohemia). Beautifully and brightly colored, the town greeted us with a whisper – it seemed pretty desolate. But soon after we found the bands of tourists visiting Kutna Hora’s main attraction – the Cathedral of St. Barbara. We’ve seen a good number of cathedrals on our trip thus far but St. Barbara fast became a contender for the top spot (at least in our minds and Brigitte’s picture attest to this notion). There’s also an incredible path leading up to the cathedral which is adorned with 13 statues of Jesuit saints of which one is of St. Barbara. It also bears special significance to Kutna Hora’s mining past (a silver rich town), as St. Barbara is the patron saint of miners. Inside the cathedral stands a statue of a miner in his traditional work garb which was pretty cool.

But even cooler was the Sedlec Ossuary (about 5 minutes away by car), an old chapel that was decorated with the actual skulls and bones of over 40,000 people. This is one of the most popular sites in the Czech Republic and righfully so. The chapel is partitioned in several sections some of which contain thousands of skulls neatly piled up in a pyramid-like heaps. On the walls were different formations – crests, writing/letters, rows of skulls, etc. Oh, and the chandelier was extraordinary (every single bone from the human body was utilized to create it). The chapel’s main chamber was mostly at underground level, fittingly symbolic of the underworld reserved for skeletons. But the thought that crossed my mind while staring at those skulls was that I was basically looking into the mirror of our future.

After the Ossuary we grabbed a bite at a place overlooking the 13 statue studded path leading to St. Barbara’s Cathedral. The food and the view were sublime. On top of that I also bought the  mug my beer was served in, and thus solved my dilemma of a Czech souvenir.

The next morning we headed south for Austria but decided to stop in the dreamy town of Český Krumlov about 2.45 hours away from Prague. Along the way we passed by the town of České Budějovice where the original Budweiser comes from. Unfortunately time would not afford us a trip to the brewery.

The weather wasn’t great when we arrived but Český Krumlov still really impressed us. The little uphill cobblestone streets, the bright colored building facades, and the Krumlov Castle (a Gothic fortress built in the 16th century), painted the town as a masterpiece. Not to mention the Vltava river circles the little town giving it a distinctive classic boundary. As the rain set in, we stopped for lunch and enjoyed a wonderful meal, our last in the Czech Republic..