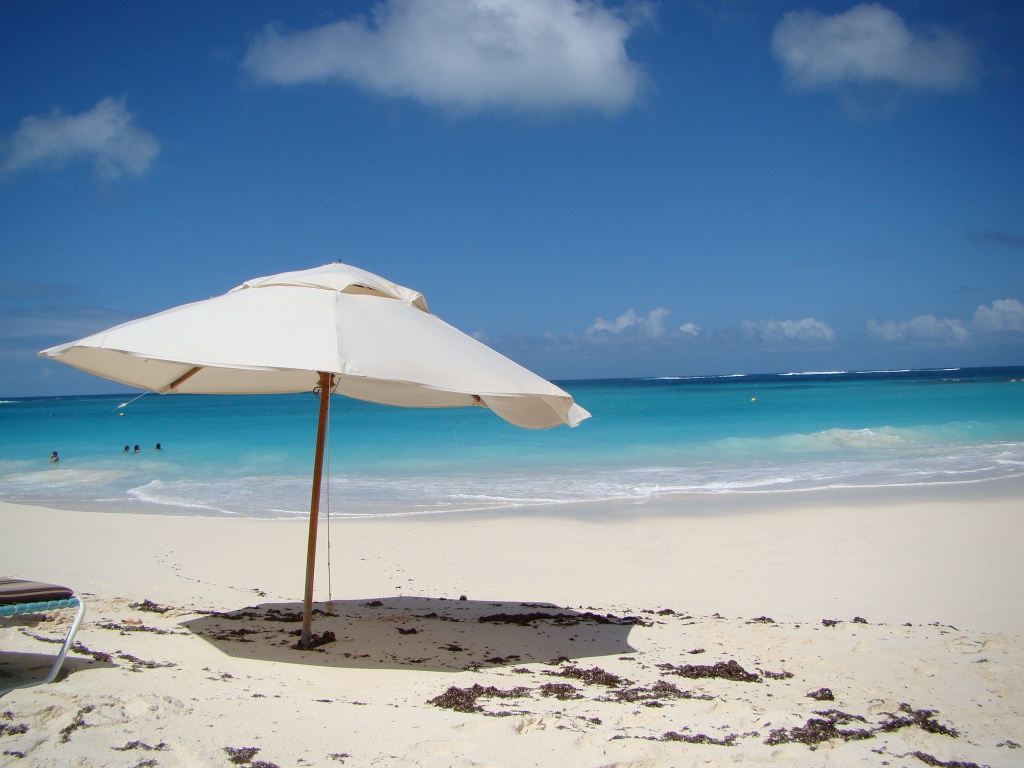 St. Martin is special to us. We started going down in February of 2010, soon after our friends Jenn and Mark relocated there. The first time we visited them in the town of Grand Case we fell in love with the island’s mellow vibe and the pristine beaches and waters. It also happened to be Mardi Gras on the night we landed which gave us a taste of Grand Case’s robust cultural flavor. There was plenty of revelry pouring down the main street with flashy costumes while drums and whistles lit up the scene. Locals and tourists flocked into the heart of town and watched as the parade unfolded. I’ll never forget our dinner at Sky’s the Limit that night (a “Lolo” place – locally owned and locally operated), where the “Rib Food” special – a heaping portion of grilled ribs complemented by rice, pasta, and coleslaw – became our new favorite item.

We’ve been returning to St. Martin on a regular basis (Brigitte moreso than me at half a dozen times), partly because we decided to have our wedding down there. This time around, we managed to land during Carnival and more importantly the annual Tacousteau. For the 4th year in a row, Jenn and Mark would be putting on an amazing fete that brings together Mark’s signature taco theme with the legacy of Jacques Cousteau, the inspiration for the Les Fruits de Mer – Extreme Shallow Snorkeling Team organization which they founded in 2006.

The St. Martin experience begins with the actual landing at Princess Juliana Airport in Sint Maarten (the Dutch side of the island). On approach to landing you can see the beautiful turquoise waters of the Caribbean sea from either side of the plane, which always has someone on-board “wow’ing” emphatically. Then as the plane descends for touchdown and looks to be landing “on water”, the welcoming sound of rubber screeching over cement finally emanates from down below. Nothing out of the ordinary here, just standard procedure. But being a spectator to the landing show from outside the plane is quite a different story, often times leaving people in awe or blaring out a mouth-full of obscenities. Maho Beach is the stage to this incredible show and happens to be in intimate proximity of the airport’s short landing strip. Each day it’s packed with beach goers primed with cameras and camcorders every time a plane (especially a large jet), approaches for landing and seems to hang just feet over everyone’s head. It’s totally surreal!

We’ve always found plenty to do on St. Martin even if it just involved spending a lot of time on the island’s beaches (there are about 36). The island is actually the smallest land mass divided between 2 countries (Holland and France). Even though we always stay in Grand Case on the French side, we like to check out new beaches on both sides of the island. This time around was no different and we even added a little more spice to our beach explorations. This meant taking a day trip to the tantalizingly close island of Anguilla, a former British island that sits just 13 miles off St. Martin (20 minutes by ferry). But unlike St. Martin, Anguilla is much flatter, less developed and less populated. There were a number of other facts about Anguilla that we also learned after visiting the Heritage Museum, one of the island’s top attractions. The museum is operated by Colville Petty, its founding father who served as a Freedom Fighter in Anguilla’s struggle for independence during the late 1960s. We were fascinated by the island’s bloodless revolution which led to Anguilla’s freedom (from St. Kitts’ rule). Today the island nation is a popular tourist destination known for its amazing white sand beaches. Often times it gets showered with travel awards from various magazines and Travel Channel actually listed Anguilla’s beaches as best in the world (with Shoal Bay among the Top 10 Caribbean Beaches). We judged for ourselves by beach-hopping our way around the island that afternoon and discovered much of its charm factor.

A couple of days later we celebrated the 4th Annual Tacousteau (our second in 4 years). Jenn and Mark had been preparing for days leading up to the event and the anticipation had grown thick. In true fashion Jenn ensured that everyone was outfitted in the team’s official gear – blue Les Fruits de Mer t-shirts and red hats in honor of Jacques Cousteau. This year there was also a pool snorkeling competition which added a fierce new element to the event. And as always, Mark’s pulled chicken and ground beef tacos were a big hit and Jenn’s chocolate cup cakes were very savory. The party went well into the night and we were happy to have been part of it. Thanks again to Les Fruits de Mer!

With a couple of days left in St. Martin, we played the roles of beach bums during the day and hung out with friends (old and new), during the evenings. One night we were invited to dinner at Simon and Laurel’s place, a couple we befriended through Mark and Jenn. Simon and Laurel had also spent considerable time abroad traveling and working in some of the countries we had visited on our journey. It was great to compare notes, exchange stories, and also get lost in their amazing pictures. It reminded us a lot of our travels.

Coming to St. Martin this time sort of brought us full circle. It’s where we were a few weeks prior to our 8-month journey around the world. And now here we were again, a few weeks after the journey concluded. Deep down we felt like we just had to come back. Or maybe it was a way to remedy our post travel depression. Either way, we loved it!