We had heard about Langkawi from our friend Allison and Brigitte’s cousin Kelly. They had both mentioned it was worth the visit. After our own research yielded positive results, the Malaysian island of Langkawi became our next destination. To get there from Thailand we embarked on a 6-hour minibus drive coupled with a 1.5-hour long ferry ride. All in all we had about a 14-hour long travel day (including overall waiting time plus the 1 hour time zone difference). So by the time we reached our hotel (around 7:30pm), we were wiped but happily learned that we had been upgraded as the front desk clerk handed us the key to our suite along with 2 welcome drink tickets. He also smiled and asked whether this was our honeymoon to which Brigitte provided an alacritous “YES!”. Good start but perhaps one would expect no less from the likes of Berjaya Resort. For the first time in our trip we decided to dip our toes in the puddle of luxury and so we booked 4 nights at the picturesque beach side resort. Enough time we figured for a no-holds barred “work on our tan” kind of stay. Good thing we loaded up on the SPF right before leaving Thailand.

The first 2 days of our stay unfortunately lived up to their dreary weather forecast with overcast skies and episodes of tropical showers. But nonetheless we still lounged at the beach and pool for hours, surprisingly managing to capture some rays (and I had the redness to prove it). We also explored the resort’s perfectly manicured grounds. Stretching from the beach all the way into the hills, part of the Berjaya resort was literally in a rainforest (which is where our unit was located). They also offered units stilted above the sea with perpetual views of the vast horizon, catering to those capable of diving head first into luxury. But for us the rainforest worked out just fine and we even got a visit from a friendly (or rather hungry), monkey who jumped on our balcony and then attempted to pull open the door. Heeding the advice of the front desk clerk we kept our doors and windows locked at all times to prevent such visits – so all we did was watch the human-like creature and wonder whether he’d score in someone else’s unit. And this was also the point when Brigitte said “he’s soo cute, I want one!”.

Despite hints from the bashful sun during the first couple of days, it wans’t until day 3 that we got see/feel its full scope. A beautiful day greeted us  so we instinctively charged down to the beach. Lounge chairs, book and ipod (our mental weapons of choice), and nothing but blue skies and sun enveloped us in a trance-like state. The soft crashing waves provided the laconic audio which would either soothe us to sleep, or attempt to poke us back to full consciousness. The cycle repeated until the sun dialed in an unbearable dose of heat driving us into the water – just how we wanted to spend our morning.

Lunch by the pool followed by a dip was somewhat sobering. This boded well as we motivated and got ourselves going down to Pantai Cenang (one of Langkawi’s most happening beach areas – a 20 minute drive from our hotel). After two and a half days of nothing but resort life (and pricey meals), we craved a little more excitement as well as some cheap eats. Pantai Cenang delivered on both fronts, the beachside strip was chock full of restaurants, bars, hotels/motels and souvenir shops. And on our way there we got to see more of Langkawi’s beautifully green rural scenes. After walking up and down the strip, we settled on a place called Oasis something, kicked back with a cold drink and took in the view piercing through a gang of palmtrees. Sea and islands sprinkled here and there as far as the eye could see. Our afternoon (like our morning), never got beyond just taking it easy and we loved it that way.

Tomato, a cheap eats spot, was the choice for dinner where we enjoyed some Indian-influenced local cuisine – yum! Right after we took to the beach and watched the sun do its final number for the evening.

Langkawi was a hand well played and as Allison/Kelly said definitely worth a visit. As for the Berjaya, it proved a world of interesting contrasts from the monkey laden rainforest to the quiet beach, the flawless resort grounds to the lackluster character of the entire place, and the thong-bikini clad young girls with their avuncular boyfriends to the fully veiled Arab women (from head to toe), immersing themselves knee deep in the sea. Such was the unforgettable Langkawi… 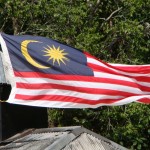 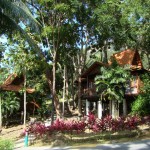 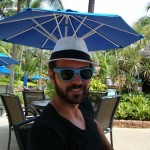 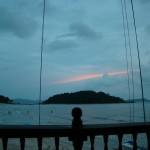 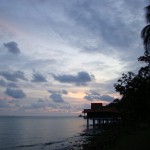 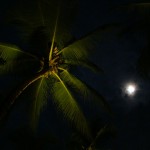 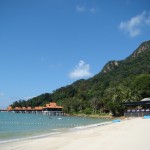 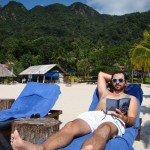 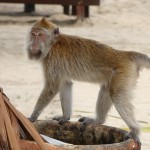 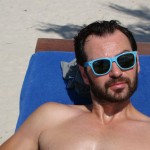 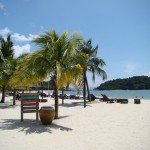 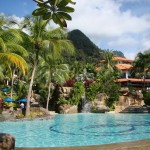 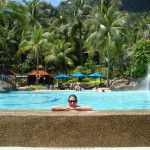 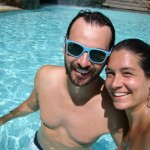 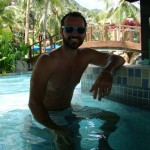 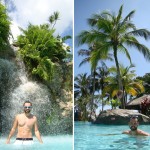 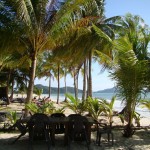 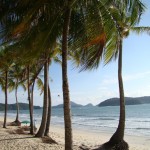 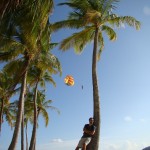 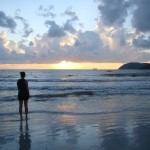 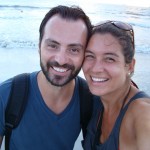 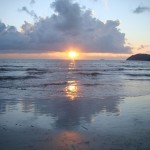