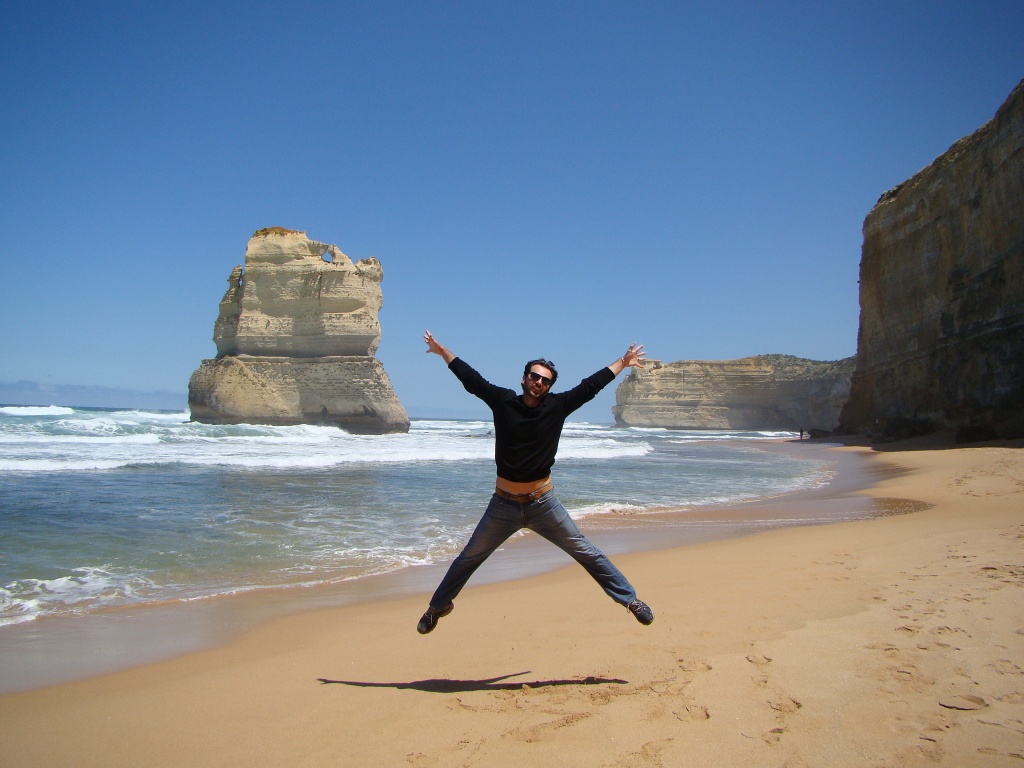 One of the things we really wanted to do in Australia was rent a car and hit the road. With about 600+ miles between Sydney and Melbourne, we figured this was a perfect opportunity. But what really fueled our motivation was to drive The Great Ocean Road, Australia’s most scenic road and arguably the most beautiful in the world. In doing so, we would also pile on another few hundred miles to our trip, so good thing for unlimited miles!

We carved out 5 days for our 4-wheels escapade and planned to stop often, for various reason (from bathroom breaks to crashing for the night and seeing some really cool stuff). We zipped through countless scenic strips of miles that took us through coastal roads, numerous towns, patches of idyllic countryside, and dense forests. Such diversity sparked up images of various places in the US from Vermont to Florida, Michigan and California. We spent most of our time trading turns behind the wheel and adjusting to driving on the “opposite” side of the road. The one thing we repeatedly did erroneously was hit the windshield wipers instead of the turn signal lever (yup, that’s all reversed too). I think that was the toughest part. Although having the steering wheel on the “passenger” (or right) side of the car also took some getting used to – but we managed. And if not, the frequent roadside reminders of “Drive on Left in Australia” would have put us back on track.

One of the places we chose to stop was Phillip Island, a rich wildlife habitat that’s home to the smallest penguins in the world (the Little Penguin) and plenty of other animals. During one of our days there we started our morning at the Koala Conservation Center, a forest where 30 koalas are permanent residents. Seeing the cute and cuddly balls of fur was a lot of fun (even though most of them were asleep – they sleep about 20 hours a day due to their slow metabolism). We even saw a mother and baby duo (awake!), walking and climbing around. These creatures are irresistibly cute and most people fall in love with them, as did we. Of course Brigitte wants one which means we’d have to move to Australia. After the koala center we had lunch at a fish and chips place in San Remo overlooking Western Port Bay. From the restaurant I spotted what appeared to be giant stingrays by the pier, and upon closer inspection there were actually 4 or 5 of them gracefully gliding in 2 – 3 feet of clear water. It would be amazing to one day swim among these swift creatures.

Koalas in the morning, giant sting rays in the afternoon, and little penguins at night. We grabbed front row seats to watch the little ones come in for the night after being out in the ocean for the day (and some for multiple days). They swim out about 15 miles off-shore and spent the entire day feeding on sardines and krill and at sundown they make their return home to feed their young (who are left alone at home). Why sundown? To avoid detection by predatory birds, and seeing the white-bellied penguins invade the beach at dusk was a singular experience. Upon reaching the shore they huddle up in teams, cross the beach to the grassy areas to find their young, and feed them by regurgitating the fish they ate out at sea. Such are the days of these little penguins. And yes, Brigitte wanted to also take one of them home.

The last 2 days of our road trip were mainly dedicated to The Great Ocean Road. We covered a good stretch between Torquay and Port Campbell which included a number of must stop points: the Gibson Steps, 12 Apostles, Loch Ard Gorge, London Bridge and Thunder Cave to name a few. The GOR twists and turns its away along Victoria’s coast for miles and miles, as turquoise ocean waters continually slap the shoreline – in some parts in dramatic fashion. An incredibly scenic paysage that never failed to get old. But the true defining features of the GOR were places like the 12 Apostles, Gibson Steps and London Bridge. This is where the coastline is abruptly severed to form 70 meter tall cliffs that drop onto the beaches, that seem to tame the savage waves. This was one of nature’s most veritable faces; the sheer fury of the ocean ferociously waging war on the limestone cliffs. After many years this is exactly what formed the 12 Apostles (although there aren’t as many). These awesome limestone formations standing off-shore in the ocean make for a surreal sight. In the last 6 years or so one of them succumbed to the ocean’s repeated battering and simply crumbled. A few other parts of the coastline met the same fate, and one of the remaining apostles may very soon meet its imminent end too (that’s my prediction). This stretch of coastline is mostly inaccessible except for Gibson Beach (via the Gibson Steps). Thanks to good old Gibson who carved steps into the limestone cliffs, people can have a dreamy experience of walking on the beach and get into close proximity to a couple of apostles. And for those brave or crazy enough a swim in the unforgiving waters, that’s definitely an option but highly admonished upon. For us though, being on that beach felt like  being on the beach from the 1968 “Planet of the Apes” movie (the final scene on the beach). The intimidating cliffs gave off a spell of bewilderment as in “where the hell am I”? It was an incredibly beautiful yet treacherous setting. It was f’ing amazing!!! One of the most beautiful places in the world that can only be understood by being there.

On the final day of our road adventure we stopped at Cape Otway’s Lighthouse, Australias’s oldest lighthouse. It was erected in response to the numerous shipwrecks that happened right off Victoria’s coast (known as Shipwreck Coast). The scenery there was impressively peaceful despite the tumultuous past. It was the ocean putting on its impregnable poker face. But the other draw of Cape Otway is the road leading to it, a manna gum-tree rich forest that’s home to tons of koalas. You can just imagine Brigitte’s face light up when we spotted the grey furballs in the wild. This was koala land, this was their territory and we were just passing admirers.