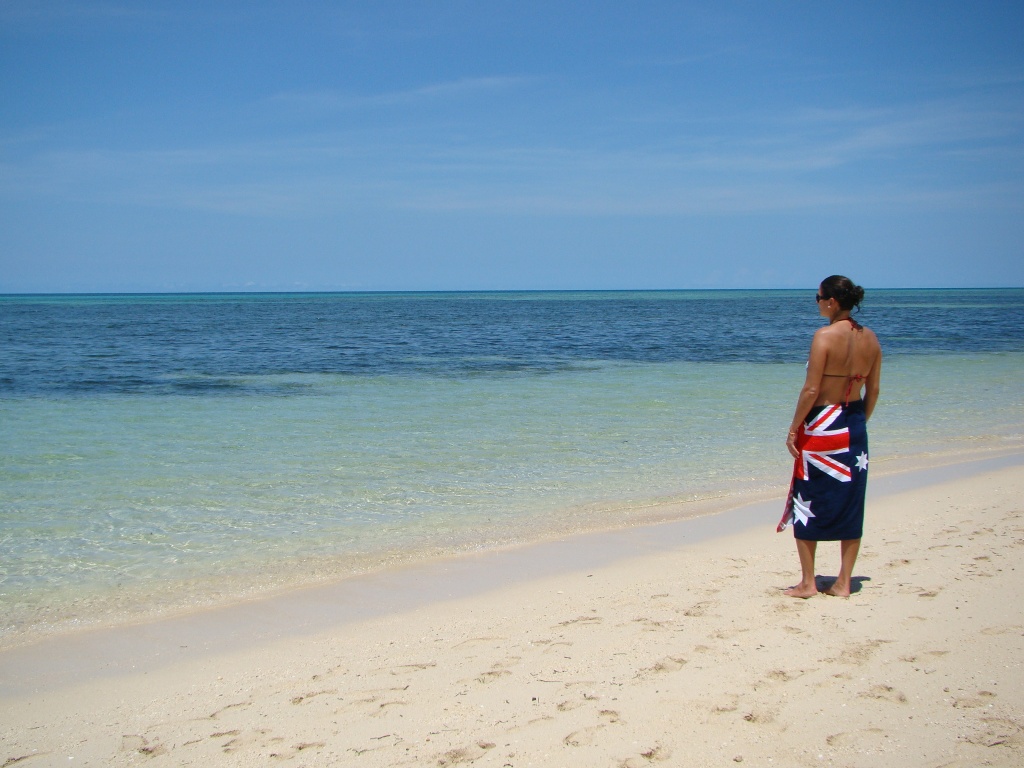 We planned to start off with a week in and around Cairns as it’s the most popular launch point to the Great Barrier Reef. Our first glimpse of the incredible natural wonder was from the plane on approach for landing. From the right side we could see the lush mountainous coastline and from the left window we saw the endless beautiful blue Coral Sea. And then right in the middle, we spotted what at first appeared to be a massive island but there was something off about it. It lacked vegetation and the color of its “sand” was very un-uniform.. that’s when we realized it wasn’t an island after all; it was the Great Barrier Reef, sitting just feet under the surface of the clear water creating an illusion.

The following morning we would have our date with the Reef. And what better way to experience it than to dive right in. The day trip we signed up for included an introductory scuba dive plus plenty of snorkeling. So we did both. It was actually my first time scuba diving (ever), and I fell in love with it. In a way it’s so unnatural, so mysterious, yet my first bite left me hungry for more. I’m sure the reef had a lot to do with it. Its beauty and intrigue was immensurate, not to mention its magnitude. Bright colored coral everywhere just popped to life right in front of our eyes, and Brigitte loved the blue ones. The shapes of most lifeforms were completely mesmerizing as was the octopus we spotted. Our dive instructor tried to touch it but it shied away seeking refuge in the crevice of a coral. Another highlight occurred during our snorkeling sessions. The expansive reef (made up by a series of reefs stretching over 1600 miles dating back anywhere between 2 – 18 million years), attracts a wide range of marine life. And the reef itself is actually a living organism composed of coral. Naturally there are tons of fish that feed off the reef and luckily for us we encountered a band of large buffalo parrot fish. At first we spotted two or three only to notice the remaining eight or nine just feet away. Coming within inches of these larger fish (3 – 4 feet in length each), was an amazing experience preceded naturally by a trickle of anxiety. We had never seen such large fish before under water, never mind swim among them.

The next day would see us embark on our rain forest adventures up the coast in northern Queensland (in the Daintree Rainforest at Cape Tribulation). We had signed up for multi-day tour and the ride up the coast was magnificent. Our driver & guide (Frazer – a real cool, funny and knowledgeable guy), stopped frequently so we could take in the scenic views – tropical mountainous terrain on the left and long stretches of white sand beaches and blue sea to the right. So enticing but unfortunately  deadly in the summer months (Dec – Mar). Stinger season is in full effect as box jellyfish introduce themselves into the waterways in early December – one sting can kill. Frazer’s advice was simple “stay out of the water” even if jellyfish nets are up. And if the jellyfish don’t get you, then maybe the “salties” or saltwater crocodiles will. Not to mention sea snakes and all the other potentially harmful creatures Australia has to offer. Staying alive in this country suddenly became something to really think about. After hearing so much about crocs and snakes it was finally time to see a few, plus kangaroos, wallabies, koalas and other more endearing animals. Our next stop was Port Douglas’ Wildlife Habitat. Brigitte was immediately infatuated with Glenn the koala bear and had her picture taken with the sleepy/cuddly furball, while I played nice with a water python and had my Kodak moment as well. We also got to touch a 3-year old saltwater baby crocodile (with its mouth taped shut of course).  From there it was on to the kangaroos and wallabies which we fed directly from our hand while trying to fend off dozens of hungry ducks. It’s amazing what animals will do for food.. as we fed a little wallaby a couple of ducks insidiously pecked at him causing him to drops his food so they could snatch it. In Indonesia we found ducks to be cute but here they proved malicious. Next we checked out the tree kangaroos, an interesting and rare to be found animal outside its natural habitat. And then finally came the birds – parrots, pigeons, black swans, more ducks as well as flightless birds like the emu and cassowary. The cassowary, an emu-like bird was a first for us. It’s actually native to Queensland Australia and like box jelly fish, sharks and crocs, it too has killed people.

After the Wildlife Habitat we took an hour long cruise down the Daintree River through the mangroves in attempt to spot crocs, snakes and other animals. As luck had it, we saw two green tree snakes and two crocs (one just had its eyes out of the water while the other completely revealed itself). The unique location for our sightings is where numerous wildlife documentaries were filmed and it totally felt like we were sitting front row to such a show.

By late afternoon we finally made it to the Daintree Forest (the oldest rainforest in the world). This is another one of Australia’s natural wonders. Frazer led us down the boardwalk through the forest as he pointed out various animals, insects and plants. He was confident we’d spot some cassowaries but it wasn’t to be. Instead, we sucked on green ant butts (which tasted like lime), ate small purple flowers that tasted like mushrooms, and tasted the peppermint-like secretion of the Peppermint Stick Insect (a cool metallic green insect) – nothing like outdoor Australian fun!

Our next couple of days at Cape Tribulation were mellow. We enjoyed long walks on the desolate beaches and managed not to encounter any crocs, cassowaries or snakes. But the hardest part especially with the blazing sun right above us was to steer clear of the water. At one point we climbed some rocks for a broader view of the sea and patches of beautiful turquoise popped all around us, as if to play a mean joke. Luckily, we did manage to find Mason’s water hole – a small fresh water pond – where we finally cooled off.

With another full day before leaving for Sydney, we wanted to experience the Reef one more time. Our love affair with the mighty wonder continued. However this time we elected a smaller and more intimate vessel (a sailboat), called Ocean Free. Its 3-man affable and professional crew gave us another day to remember.

The itinerary was simple; dive, snorkel, have lunch and go check out Green Island (one of many islands out on the reef), as an option. There is a maritime museum on the island that’s home to a host of fish and several saltwater crocs, among them Cassius (more on him later). In the morning we enjoyed a clear blue day with much sun. We dropped anchor about 17 miles from the mainland and a half mile from Green Island. The surroundings were majestic. The ocean stretched in all directions like a perpetual blue blanket, with streaks of turquoise in various spots. And the nearby sight of Green Island as the name suggests was quite green, rich in vegetation (but it also hosts a resort and a number of shops). We started out snorkeling for a bit and spotted a turtle. We followed it until it found refuge under some coral and so we moved on. Our other sightings included a number of fish ranging in size from a couple of inches to a couple of feet. But it wasn’t until the reef sharks made their appearance that we got hit with a heavy dose of exhilaration. There were about four of them, each 4 or 5 feet in length and observing them underwater was like, “holy shit, is this for real”? Apparently they are completely harmless but still, for us this was the first time actually swimming among sharks. And it was awesome! Their sleekness was captivating, I can definitely see how their larger brethren are the sea’s most stealthy predators. Unfortunately they had disappeared by the time we went diving but the playful turtle we saw before made up for it. Seeing and feeling marine life forms in their habitat was just an incredible experience. Hopefully the underwater disposable camera did some justice. After all the Great Barrier Reef is the world’s most bio-diverse ecosystem.

After lunch we checked out Green Island’s marine museum and finally saw the 100+ year old Cassius. We watched the 5.5 meter long (18-foot), croc devour its lunch after leaping several feet in the air to reach it (despite missing his left arm). This guy just made it in the Guinness Book of Records as the biggest croc in the world! It was pretty terrifying to see him up close, even with the separating fence. The museum keeper who feeds him every day while standing just feet away from the massive killer has some bravado. I could not ever do his job!

But what I could do is relive our days on the reef (whenever that may be).. Opting for the sailboat was a great choice, taking in the ocean’s beauty and vastness was so enchanting. On our way back to port the captain even threw up the sails and let the wind do its part. This was the perfect finale to just another incredible day in Australia.