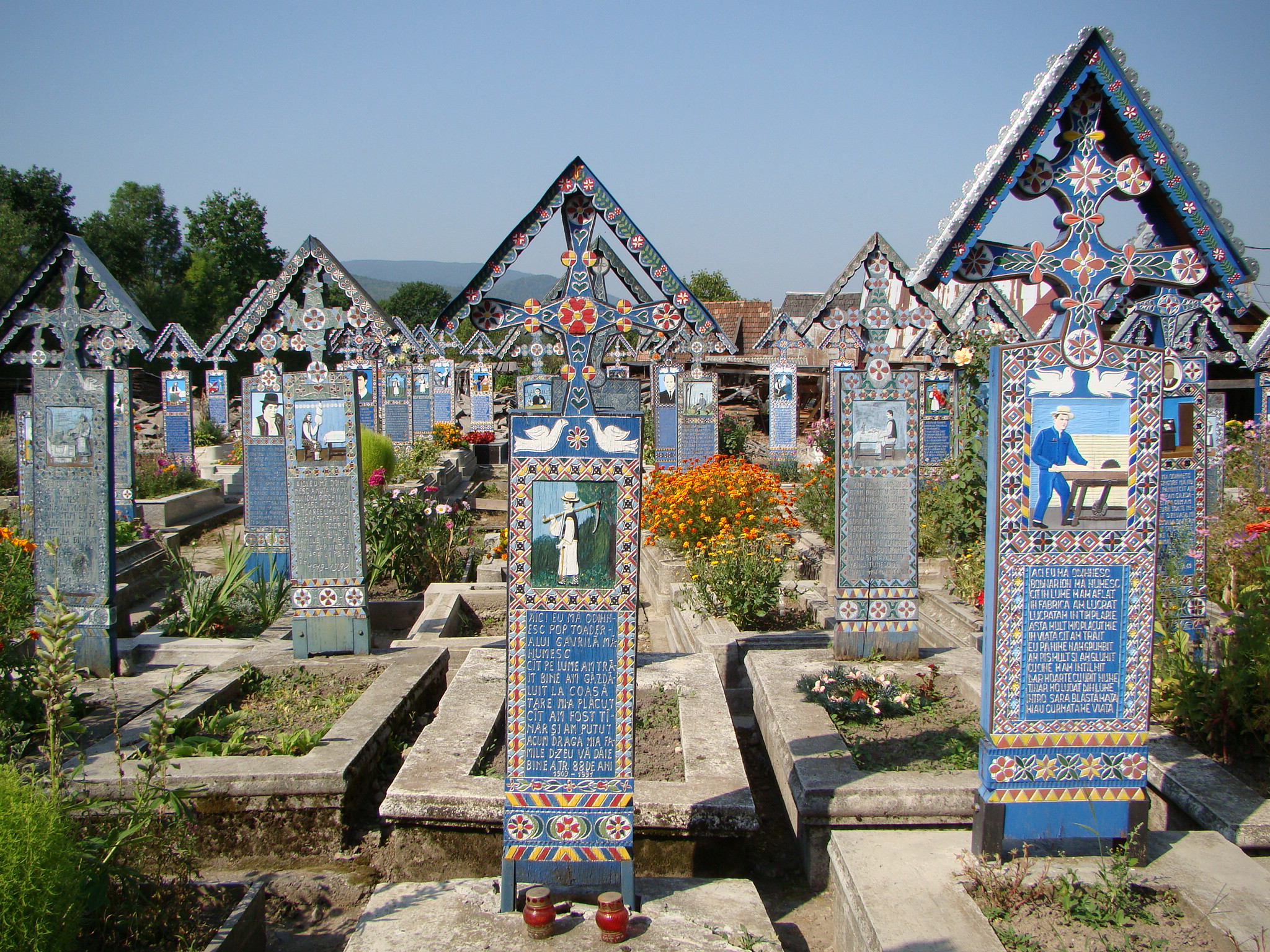 After a couple of days of visiting monasteries in Neamt and Bucovina, we decided to head west into Maramures. Our GPS calculated the “best” route and spat out an estimated time of 4 hours – not too bad. Little did we know this would become the best and worst road we’d travel. We started out through the idyllic countryside traversing through the Carpathian Mountains. A hot and sunny morning morphed into a cooler and grayer afternoon producing fog at the top of the mountains. Snaking our way up and down we found ourselves on one of the most scenic roads ever and in intimate proximity with the hallucinating landscape. Mountains sporting thick forest covers became the perpetual backdrop as “Craiggy” (we decided to name our car), smoothed us around the curves. So far so good, but soon enough rain droplets started pecking away at our windshield. Within a few minutes we couldn’t see even 10 feet in front of us. The windshield wipers were furiously swatting away at the rain with mediocre results. Luckily by this point we were on a smaller road with fewer cars passing by. So much for a 4 hour drive.. The rain finally began to let up which made us happy but the road obstacles were far from over. A truck directly ahead of us transporting logs seemed certain to lose some of its cargo (as a few logs loosely swung up and down like a diving board). But within minutes the sun was back – blazing down upon us having dried up the road. So we thought maybe a 5 hour drive after all.. but no! Not if the next 20 mile stretch was completely peppered with “craters”. Doing 15 miles an hour for the next half hour popping in and out of holes was irking at first, infuriating after 20 minutes and laughable by the end. But we persevered and 6+ hours later we hit our destination.

The little of village of Sapanta on Romania’s northern border is known for its Merry Cemetery. This was another much desired destination for Brigitte ever since we saw a documentary about it some years ago. The cemetery is like no other, its 800 graves or so: 1) have wooden crosses painted blue symbolic of freedom and hope 2) have a merry depiction of the deceased in their hey-day along with their passion in life 3) have epitaphs in the first person that are partly infused with humor, irony and solace. Case in point, there was one guy who felt he passed too young but he just loved drinking too much and knew his days were numbered. The creator of all this (Stan Ioan Patras) actually planned for his own cross. Patras started the Merry Cemetery phenomenon in 1935 and the tradition has been passed down and carried on to this day. What struck us most about the cemetery was that it lifted the veil of anonymity and allowed us to learn about someone’s life and death. Some stories were happy of lives fully lived while others were somber and tragic (lives being cut too short). The Merry Cemetery is a special place not only for those who have passed but also those who pass through it and are profoundly touched by the experience.

From there we headed south for the nearby town of Sighetu Marmatiei where we visited Sighet Prison. The prison dates back to 1897 but it was the period during the late 1940s and mid 1950s that account for its notoriety. During those years a great number of Romanian intellectuals and influencers were incarcerated there by the newly instated communist regime (on no legal basis). The jail still exists today but has been converted into a Memorial Museum dedicated to those who suffered and died at the hands of the communists. The tour of the museum was presented in the actual cells each providing a chilling tell-all about the nefarious communist system and its draconian tactics that kept them in power for 40+ years. The most notorious part of the regime was the Securitate, a “state security” organ designed to maintain order by keeping the population in check. It was sort of an enforcer group (or secret police), that employed any measure necessary to achieve its goals. During the communist regime in Romania citizens lived stripped of basic human rights (to vote, travel, freedom of speech, press and freedom of religion to name a few). The repressive communist regime went as far as eliminating the free thinkers and those capable of leading the country on a bright path. This elimination occurred in places like Sighet Prison, one of dozens such jails around the country. One of the cells discussed how the Securitate tortured prisoners (male and female) – a difficult room to be in and carry on reading about their horrid crimes. Another couple of cells were dedicated to key figures who actually died in them while serving their sentences. Then there was the “black room” or punishment cell, deprived of any light where a prisoner was shackled to the center of the room and left to stand for days and nights. Just as foul if not worst was the “re-education” of prisoners in which the communists would work to break down the mental state of prisoners and then inseminate them with communist ideals. Many people died as a result of the communist regime in Romania. There is a group of statues in the prison’s courtyard (consisting of nude men and women with missing limbs), perhaps symbolic of the oppressed and incomplete lives of most Romanians during the communist era. Opposite them stands the statue of a headless man with his arm pointing forward.. perhaps symbolic of the directionless communist vision and the deep trench it carved within the heart of a nation.