The last time we were in Evian we wanted to see Chateau Ripaille (a lovely 14th century castle located in the nearby town of Thonon surrounded by vineyards), but unfortunately we didn’t. This time around we got to tour the chateau which belonged to the Duchy of Savoy (the rulers of this area from the 15th to the 19th century). The Savoyards flexed their muscles throughout northern Italy as well as parts of Switzerland and France – they seemed to enjoy castle life, wine culture and torturing enemies. We also visited the chateau’s forest which occupies several hectares of the surrounding land, giving Ripaille an isolated countryside feel despite its suburban location. Staying within a medieval mindset, we later took the ferry (on Lake Geneva) to nearby Yvoire – a tiny medieval town that combines rugged stone homes with affluent floral displays and scenic views of the lake. The town is rated “4-flowers” according to the floral scale assigned to the prettiest flowery towns in France and rightfully so.

For the next couple of days we decided to pop into Geneva one more time and hang with Dawda, Claire and Aden. Sunday was a gorgeous day so we made the best of it by going to Geneva Beach – a perfectly manicured grass park edging on Lake Geneva comprised of several swimming pools, orderly beach lockers, concession stands, etc. Oh and a very erect diving platform over the lake with its highest point topping off at about 35 feet – something I instinctively blocked out of my mind as reassurance of never giving one ounce of thought to the notion of free fall. But then again, what’s a day at Geneva Beach without jumping into the lake from the diving platform? At least that was Dawda’s disposition.. but why I chose to follow suit and plunge from that height (which for many is but a hop), I still can’t comprehend. Right before taking that proverbial leap of faith I told myself, when ever will you have the opportunity to crash into Lake Geneva at free-fall speed right after one of your best friends did it without a second thought. Not to mention that I would’ve become the laughing stock of several much younger children who were at the top of the platform right behind me anxiously awaiting their turn. If you don’t like heights (and I certainly don’t), then don’t test yourself unless you can handle the repercussions – which for me meant a delayed case of extreme nausea followed by projectile vomiting and headache. Not only that but I was also sidelined for Claire’s delicious pasta dinner that night and Dawda’s uncorking of a 2000 Layer Cake Merlot – which Brigitte said was delish. Playing Johnny Bravo served me right.

The next day (after having recovered), I was ready for our new and much tamer adventure – a day trip to Annecy. Dawda and Claire had wanted to see and it was only about 40 minutes away from Geneva. Annecy was recently among the bidding cities for hosting the 2014 Winter Olympics but things didn’t pan out. Nonetheless this town still had tons to offer from its historic medieval center to crystal clear canals, to its neighboring lake and surrounding Alps. Annecy’s charm was impressive and we all concurred. But what really drew us was the turquoise lake and the numerous water/boating activities at hand. We opted for the small engine boat for an hour which paid off handsomely. Dawda drove us out in the middle of the lake and we absorbed the panoramic view of mountains and the distant Annecy dock. This also seemed like the perfect spot to take a dip in the amusingly clear water, so Dawda and I jumped in. The ladies stayed on the boat with Aden and shot plenty of “film” of the scenery. Olympics or no Olympics, Annecy is still a gold medal town in its natural splendor and the bon vivant attitude it inspires.

After a wonderful day in Annecy it was later time to part ways and Brigitte and I made our way back to Evian. Quality time may sound very trite but here’s a toast to Claire, Dawda and Aden for spending quality time with people we love. 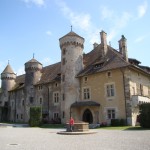 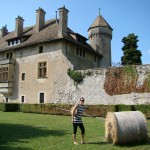 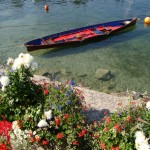 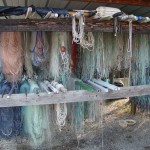 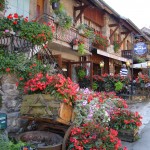 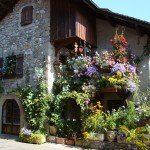 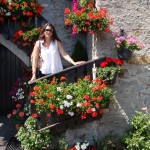 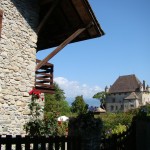 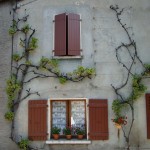 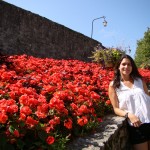 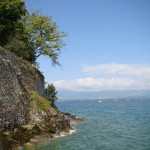 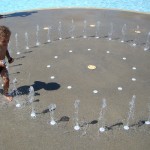 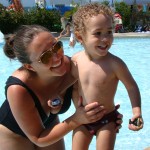 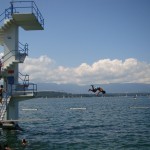 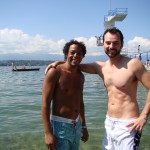 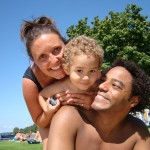 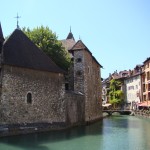 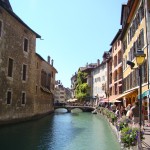 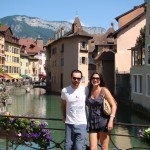 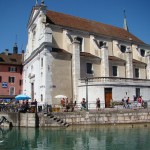 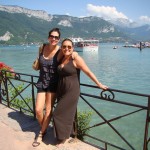 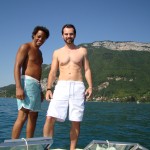 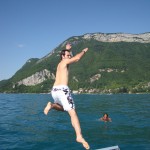 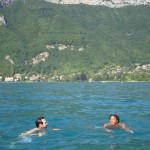 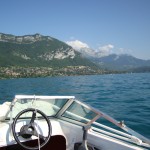 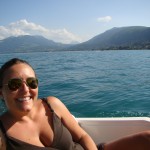 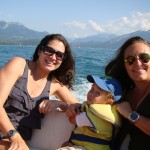 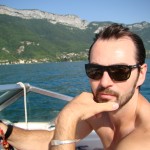 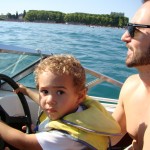