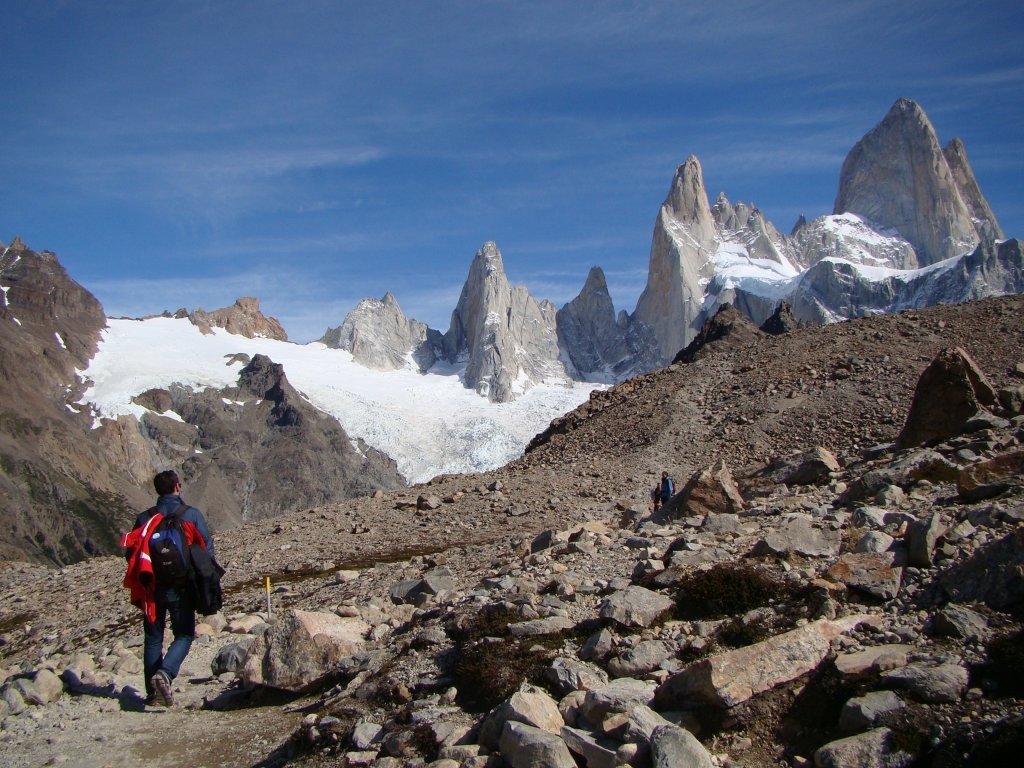 Our trip took a 180-degree turn when we arrived in Patagonia, going from urban and hot to highly remote, scenic and frigid. Argentine Patagonia is one of the country’s vast regions that includes the third largest ice field in the world (home to 300+ glaciers in the Andes Mountains). Apparently tourism to this area has increased exponentially over the years but there still is plenty of untouched countryside to make you feel like you’re in the middle of nowhere. The landscape around El Calafate and El Chalten (where we stayed), is comprised of a massive steppe, a yellow carpet of arid, inhospitable land largely devoid of trees. The surrounding canyons created the perfect set for a Western film. The finishing touches to the masterpiece landscape came in form of two of the largest and vibrant turquoise lakes in Argentina (Lake Argentino and Lake Viedma). And just on the horizon to the east, the snow-capped Andes mountain range added another element to the already tranquil and scenic landscape.

We filled our days in Patagonia with outdoor activities centered around the magnificent nearby glaciers and turquoise lakes that came as a result of their melting. We got up close and personal with the Perito Moreno glacier by doing a mini trek. It was our first ever and the unique experience was rewarded with a glass of scotch towards the end of the trek (while on the massive piece of ice). Thanks to Perito, the ice that filled out glasses came as courtesy of the glacier itself. Our guides had set up a rudimentary mini bar in anticipation of an excited and thirsty bunch of trekkers. Salud chicos! As we later exploited several observation points to capture memorable shots of the incredible ice, thunderous cracks gave way to chunks of Moreno calving into its lake. These were special moments, mother nature at its finest on a clear crips day.

The following day we headed by boat towards the Upsala Glacier, once the largest in the entire ice field. The boat trip offered a different vantage point and allowed us to come within proximity of Upsala’s splintered icebergs, massive chunks of ice seemingly floating on the lake. Gingerly approaching the monster chunks provided a clear picture of the magnitude of the glacier which apparently has been in recession for many decades. Later that day we even got to see how far the ice mass receded in the past 80 years. A bumpy 4X4 ride on a nearby mountain brought us to the main view point of Upsala and the surrounding landscape. The mountain we drove up (a huge chunk of mainly sedimentary rock), appeared in peculiar form as twisted red steel with giant striations. But the view from this enormous mountain junkyard served up a harmonious quartet of Patagonian’s finest. A string of snow-capped mountain peaks, valleys oozing out glaciers, massive emerald lakes and this crazy twisted landscape we drive up on. As cliche as it may sound, our planet has a spectacular imagination. From Upsala we made our way down to Estancia Cristina, a solitary ranch that was established in the early 1900s by an immigrant British family. Although no longer in function, the ranch offered an inside look at the life of the former owners over the past hundred years (wool trade as one of their primary sources of income). Laying in the grass after having lunch outside with nearby horses in the backdrop was just an easy way to spend part of the afternoon.

After two days of experiencing mighty glaciers we made our way north to the minute town El Chalten or the gateway to all Mt. Fitz Roy expeditions. We opted for a day hike to Laguna de Los Tres, an amazing place that offered front row seats to Mt. Fitz Roy’s scenic peak (the same peaks that inspired the logo of outdoor wear manufacturer Patagonia). The hike itself was also a highlight, starting out through beautiful forests. A couple of hours later the trail took a serious vertical turn that definitely pushed us. Frequent rest stops and water breaks aided our arduous ascent which finally paid off with a spectacular view of Mt. Fitz Roy, its resident glaciers and emerald lake. We took our time up there, taking it all in and appreciating the raw beauty of this Patagonian paradise.

Our decent back into town lasted a few hours given our repetitious photo stops to capture the scenic landscape. The view in the last hour opened up to a beautiful valley severed by the Rio de Las Vueltas. When finally back in town we decided on a hard day’s work of “parilla” or grilled meat (steaks), at Como Vaca for dinner.

From vibrant Buenos Aires touched by a multitude of cultural hands to the raw and untouched beauty of Patagonia, Argentina (land of the Tango, delectable steaks, Maradona and Evita), had found a warm place in our hearts.

One thought on “Argentina Part 2 – Patagonia”