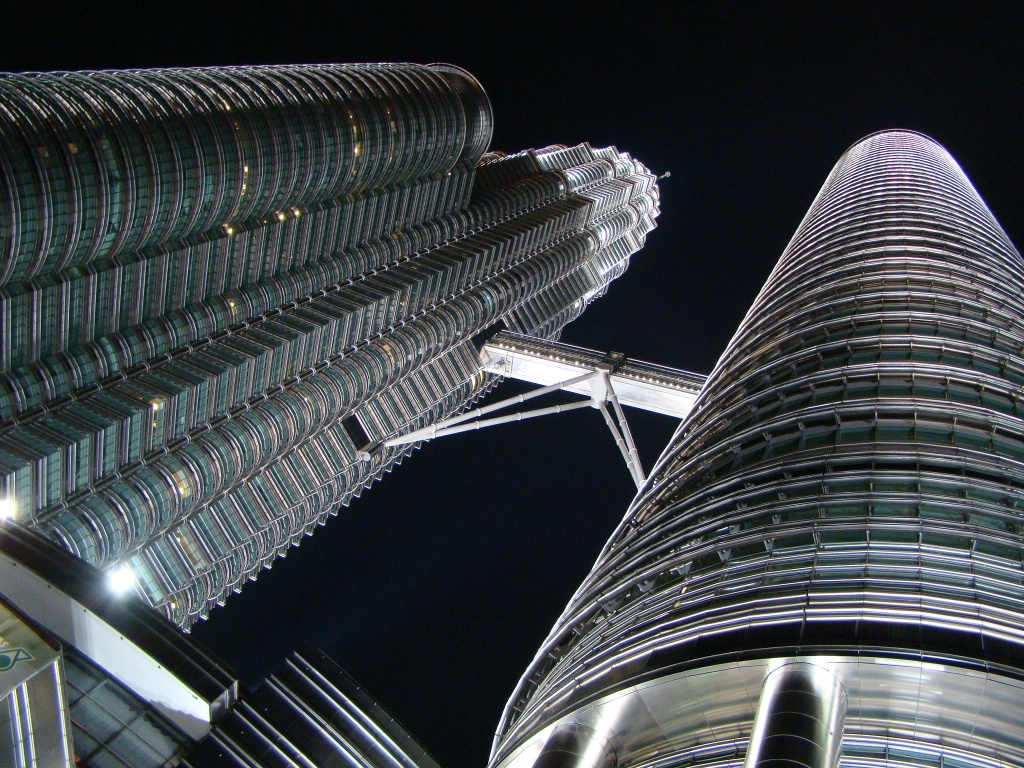 The “7 hour” bus ride to Kuala Lumpur actually lasted about 10 but neither Brigitte nor I were very bothered by it. For a good part of the ride (hours on end), palm trees lined both sides of the freeway at times interrupted by the occasional rest stop or gas station, somewhat reminiscent of the New Jersey Turnpike. And around 7pm one of the most amazing sunsets painted the distant horizon pink-red and left us in awe of the fiery spectacle.

One of the few things I was familiar with about Kuala Lumpur was its twin towers or the Petronas Towers. They came into view as our bus got within city limits, lighting up the sky around them. A flash of excitement ran through me as I’ve always wanted to see them up close and personal – finally, my chance had arrived. We booked 4 nights in KL (the acronym by which the Malaysian capital is known), but it wasn’t until day 2 that we checked out the towers.

On day 1, we strolled around town checking off our list various sights & landmarks. One of the first impressions about KL was the level of modernity the city is shrouded in. Prominent bank towers, big-name hotels and other massive concrete marvels vociferously spoke of the city’s economic might. And all this makes sense when oil is flowing through the veins of Malaysia’s natural resource repertoire. Our first stop was Independence Square where Malaysia proclaimed its freedom in 1957 from British rule. Surrounding the square (and also nearby), were some of the city’s most architecturally beautiful buildings including the Sultan Abdul Samad Building, the Masjid Jamek Mosque and the Selangor Club Padang. Also within the square was the City Gallery hosting an exhibit on KL which offered an intimate look into its past. The name itself – Kuala Lumpur – actually means muddy estuary. From there we wandered about for a few hours seeing some of KL’s old colonial streets while spotting numerous graffiti sightings – there’s definitely talent in this town! Not much later the forecasted thunderstorms caught up with us and so we retreated to our hotel. Later that evening (after the rain stopped), we made an outing in order to catch up with our new friend Sally.

We had met Sally on our way from Thailand to Malaysia and decided on linking up with her in KL since we would all be there at the same time. Like us, she took some time off to travel around the world so having a toast together was in order. One of Sally’s friends had also just gotten into town that day so the 4 of us settled in for a night of cocktails and good stories. At times we laughed our asses off thanks in part to Sally’s overnight bus story with the broken toilet. Aah, memories for a lifetime..

Day 2 saw us covering other parts of KL starting off at the railway station, an artistic structure built in 1910. The nearby National Mosque was also another sighting adorned by rich Islamic architecture but unlike other mosques it was not open to non-Muslim tourists. So we admired it from the outside. Next we made our way through the lush Lake Gardens which gave way to the National Monument, emblematic of Malaysia’s fight and victory for democracy. Next up was the KLCC or Kuala Lumpur Commercial Center which is where the Petronas Towers are located. At last, we stood at the base of the towers in sheer admiration. Tons of reinforced concrete and endless glass blessed by the graces of beautiful Islamic architecture and motifs – BAM! Actually double BAM!! We took a bunch pictures but the overcast sky was unforgiving. So we opted to check out the commercial center which turned out to be “an afternoon at the mall”. KLCC, a vast array of world-class shops for all your purchasing pleasures from Louis V to Rolex, Prada, all the way down to Toys “R” Us and Kinokuniya (a Borders-like bookshop). For a moment we totally felt as though we had been teleported to some fancy mall in South Florida. As luck would have it we later stumbled upon the movie theater and there it was – Tintin the movie – in 3D nonetheless! $17 meant 2 movie tickets and a batch of popcorn plus a lychee juice. An hour and a half full of pure entertainment and adventure but I won’t give away anything as the movie hits theaters in the US in late December (suckers!). By the time we got out of the movie, night had dropped upon KL and we went back to see the towers. The paramount twins glowed with paralyzing beauty. They became our muse for the next hour or so, Brigitte said she needed a bigger camera as I kept rolling film. At night the fraternal giants were simply mesmerizing, beacons of architectural splendors and for us – as New Yorkers – a heartfelt reminder of our late twins. The down side however was that they were closed for tourist visits because of renovations. The bridge on the 41st and 42nd floors connecting the towers is typically a major attraction.

On day 3 we set up a couple dates with altitude. In the morning we paid a visit to the Batu Caves just in the outskirts of KL. The caves which naturally formed hundreds of millions of years ago, serve today as one of the most important Hindu shires outside of India. The cave complex is situated about 300+ feet above ground level and so we climbed 272 steep steps in order to access them. Dozens of other visitors and worshipers were also making their way up and down the steps but with caution as gangs of macaque monkeys paraded all around in search of anything edible. Some people exhibited a certain level of fear while others handed bananas over to them. Brigitte snapped a few photos adding to our monkey collection. The limestone caves were impressive and several colorful shines depicting Hindu deities occupied them. It felt like a powerful place of worship.

After the caves we took a mid-afternoon break before heading out to the Kuala Lumpur Tower (later that evening), a 1,300 foot tall communications tower located smack in the middle of downtown KL. We wanted to see the city from above as the sun set. The 360-degree observation deck and the audio guide gave a good account of the city’s major landmarks as well as their history. The second tallest free-standing tower in the world provided amazing views of a city. As night fell, bright neon lights sparked up the sky from nearby hotels and bank towers which were completely dwarfed from our vantage point. 58 seconds is all it took to ride up or down the elevator while covering more than 1,000 feet. Back at ground level, we made our way over to the popular Bukit Bintang neighborhood for one last bite and a drink in KL.

The following day would see us off to our next destination and where Brigitte last lived in Asia – Jakarta. 20 years ago she had left and it was now time for a return visit.