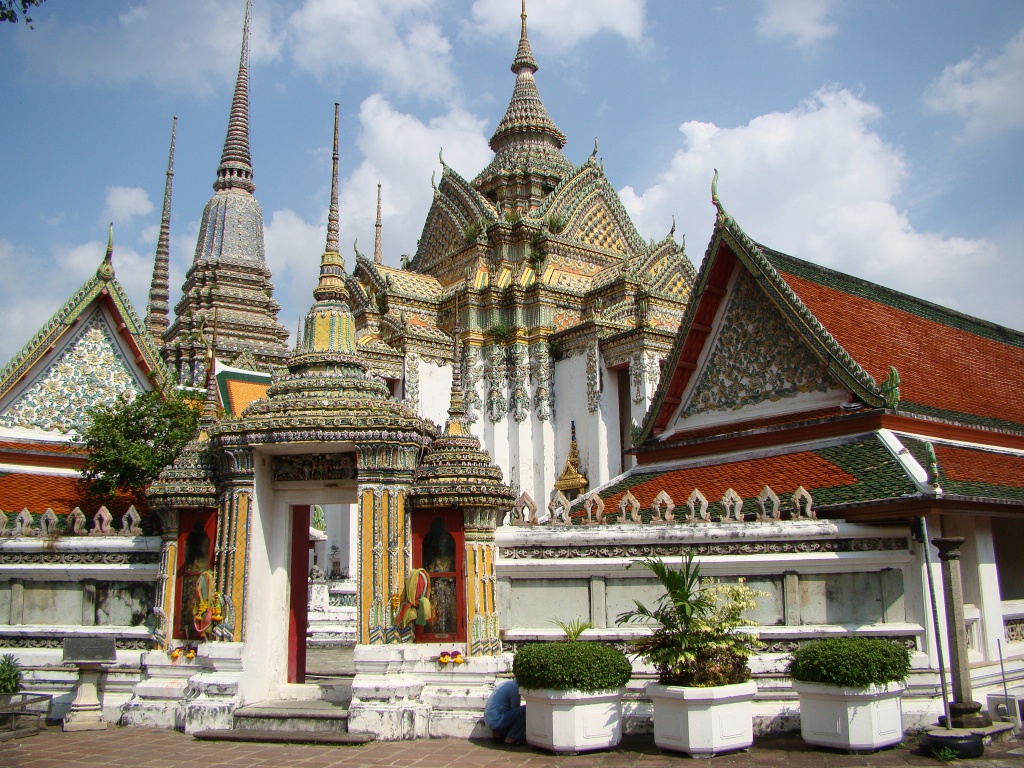 Our last two days in Bangkok saw us cover much of the city in our quest for more sight-seeing. Home to about 8 million people the city stretches over a vast area with considerable walking distances between various points of interest.

On Saturday we kick-started our morning by walking a half hour to Ananta Samakhom Throne Hall, a glamorous Renaissance style reception hall built during the reign of King Rama V. The hall serves as a museum today and our visit included a lavish exhibit of royal regalia, thrones & houdas, and other relics that were created for the king and queen’s milestones (birthday, years in power, etc..). Most of the items were created by the hands of several groups of artisans over long periods of time (even up to two years), and were covered in gold, silver, diamonds, sapphires and other precious stones. The magnitude of these items was considerable and left us thinking of the probable value of such an incredible display of razzle-dazzle. The unfortunate thing was that we weren’t allowed to take any photos inside the exhibit. But the other thing that wowed us was the use of beetle wings in the production of some of the items on display – beautiful metallic green in appearance, the wings were only of beetles that died naturally. It’s dizzying just thinking of the level of meticulous work that went into such pieces with sharp detail.

After the palace we visited the Vimanmek Mansion. Built by King Rama V in 1900, the mansion was constructed from teakwood and utilized by the royal family until 1906 as one of their palaces. After that, it was converted into a museum housing original furniture, china collections, rugs and other belongings from of the royal family. Our tour provided a good look at early 20th century royal Thai life and the innumerable items amassed by the family (most of which were gifts from other nations and their respective royal members and dignitaries). Overall the mansion was a masterful piece of wooden architecture constructed without the use of nails. But again, no photos were allowed inside which was a bummer.

Next, it was back to pounding the pavement of several neighborhoods en route to Jim Thompson’s House Museum. Jim Thompson was an American entrepreneur (who moved to Bangkok), and introduced Thai silk to the western world during the 1950s/60s and made a killing in the process – which was one of the reasons he became famous. The other reason was his disappearance in 1967 while on a trip to Malaysia – apparently Jim headed out for a walk and was never seen again (and there has been no trace of him ever since). Besides leaving behind his silk empire, he also left his amazing home in Bangkok. Kept in the original form (with the initial grounds layout), Jim Thompson’s old teak home was compiled from several traditional Thai homes – brought to their present location and annexed to form the mogul’s humble abode. Humble in that it was modestly decorated with mainly traditional Thai art as we observed during our tour. About midway into our exploration of the house the heavy rain started which brought the abundant plants from the garden to life – tropical rain just has a way of making things come alive. The beautiful teakwood house gave off a very welcoming feeling, as though Jim Thompson himself wanted it to welcome millions of visitors over the years to learn about his legacy and mysterious disappearance.

A little later after the rain stopped we made our way back to Khao San (our street), where we enjoyed a delicious meal at Tom Yom Kung. Right after it was time for us to feed the fishes and so we submerged our legs knee deep into a giant tank of toothless mini carp and watched those suckers chow – fish pedicure as it’s known around here. Apparently the fish eat off your dead skin cells, which explained the incredibly smooth feet we were left with.

The next day we were at it again, more sightseeing as well as attempting to locate the house where Brigitte lived back in the early 1980s.

Our first move was to the famous Weekend Market (Chatuchak Market), a compilation of hundreds of vendors & shops from anything and everything imaginable. It was like a grand bazaar, an endless labyrinth of purchasing opportunity – although we went for the experience and just to look. We did grab a yummy lunch there followed by a negotiable taxi ride to other side of town. Although most taxis have meters, their use is highly “discretionary” by drivers who insouciantly wave off potential customers (like us) who insist on having a metered ride vs. negotiating a flat fee. So this time we found ourselves at their mercy and probably got overcharged even though it was only about a $7 ride.

Our destination was Wat Pho, another fantastic Buddhist temple, in fact the largest and oldest in Bangkok dating from the 16th century. It’s home to the largest reclining Buddha, the position being symbolic of the passing into final nirvana. It’s about 140 feet long and 45 feet tall. Wat Pho also comprises the largest collection of Buddha images in Thailand. There was a lot to see within the complex and so we bounced from one temple to another catching up with a differently positioned Buddha in each. But the “big hit” and most cumbersome to capture in one picture frame was the enormous Reclining Buddha – it was awesome!

Just across the Chao Phraya river was the Wat Arun, another breathtaking temple named after the Indian god of Dawn (or Aruna). Its 240+ foot tall spire stood impressively erect and gleamed at us – it was built from porcelain tiles left over by Chinese merchant ships. We climbed the temple’s aggressively steep steps and enjoyed Bangkok’s distant skyline on what remained of a very sunny afternoon.

Next we headed for Brigitte’s old street which turned into an hour plus walk. On our way we passed through Chinatown which was hosting a parade or festival of sorts. Interestingly the main street was not closed for the costume sporting paraders and so they “shared” the pavement with myriads of cars. Hundreds of spectators hugged the overcrowded street from both sides making for an awesomely chaotic scene.  We made it to the old street but unfortunately this was all the information we had (just the street name).. the actual house number remained a figment of the past. We walked the entire street end to end (about a mile and a half), but nothing stood out to Brigitte (she was 6 when she left here). But we did take some comfort in walking by where she once lived.

From there it was time to negotiate a fare again but this time with a tuk tuk driver. After an exhausting day we were finally back in our neighborhood where we enjoyed another round of delicious street pad thai, spring rolls and cold beer!