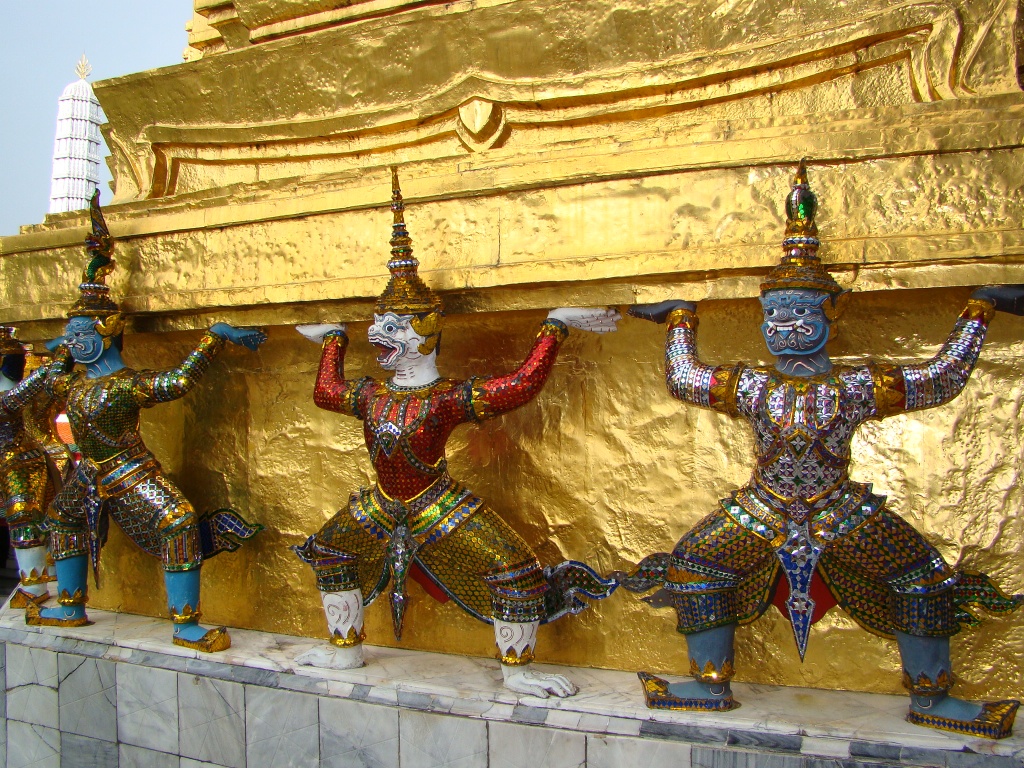 It was a long ride from Turkey to Thailand but after 2 flights and 15 hours we landed at Bangkok International Airport. We planned on 5 days & 4 nights in the Thai capital and our hotel was smack in the middle of Khao San Road, a vibrant part of the city catering to tourists and backpackers alike. Coming to Bangkok was special for Brigitte; she lived here for 4 of her childhood years and this was her first time back in 27 years. I was also super excited and my experience can be best described as a bucket of firsts: first time in Asia, first tuk tuk ride, first street pad thai for $1.50, first fried grasshopper (30 cents and no it didn’t taste gross), first Thai foot massage and first Chang Beer. There was a lot to take in for our first couple of days – what immediately jumped out was the incredible vibe of our street/neighborhood, the omnipresence of shops, bars & restaurants, street food vendors and everyone trying to make a fast buck was almost overwhelming. Offers came to us from left and right for suits, massages, drinks, souvenirs, bracelets, sunglasses, hats, ping pong shows (use your imagination here), and other goods. Keeping our money in our wallets felt counter-intuitive in a place that had it all at bargain prices. But we settled for a cold beer at a street-front bar (the first night), and absorbed the scene. The buzz grew louder the later it got and morphed the street into more of a club scene. Trying to fight our jet lag we retired to our hotel and called it a night around midnight.

The next day we set out sightseeing and started with the Wat Mahathat, one of the oldest shrines and headquarters for the monastic order of Thailand. Along the way we stumbled upon a series of street vendors of which a couple specialized in numismatics (my kind of crew). Then it was on to the Standing Buddha, a 100-foot tall statue (of Buddha), significant for being a place of homage. From there our tuk tuk weaved through traffic and brought us to Wat Saket/Golden Mount, another Buddhist temple built in during the 18th century – from there we enjoyed views of Bangkok’s expansive layout, a mix of modern sky-rise towers (businesses and hotels), temples and low-rise residential buildings. The next stop on our tuk tuk ride was the Grand Palace, an enormous complex established in 1782 as the royal residences, throne halls and various administrative buildings. Numerous temples, halls, statues and monuments comprised the incredible assortment of richly decorated buildings. Rich as in what appeared to be thousands of decorative tiles or pieces that can truly be appreciated in close proximity. From a distance the appearance was still magnificent but the level of work and craftsmanship becomes intimately evident up close. The vast array of colors also played to my delight. The other significant factor was the inclusion of mythical animals as part of the Buddhist faith – monkeys serving as guardians decked out in traditional warrior gear. Several murals depicted these intrepid warriors in various battle scenes. And then there’s was the Emerald Buddha temple or Wat Phra Kaew. Considered the most sacred Buddhist temple in Thailand, it houses the statue of Emerald Buddha (actually carved out of a single jade stone). It’s symbolic of Buddha’s ascension into Nirvana and no-one is allowed to touch the jade statue except the Thai King who changes Buddha’s outfit three times a year based on the seasons (for good fortune).

After taking in the Grand Palace complex and its intricately beautiful temples and halls, we made our way back to our neighborhood for dinner and some relaxation. Our street (Khao San) was in full form with commerce, partying and good times all around late into the night – our night ended with the air conditioner drowning out the thunderous street buzz.