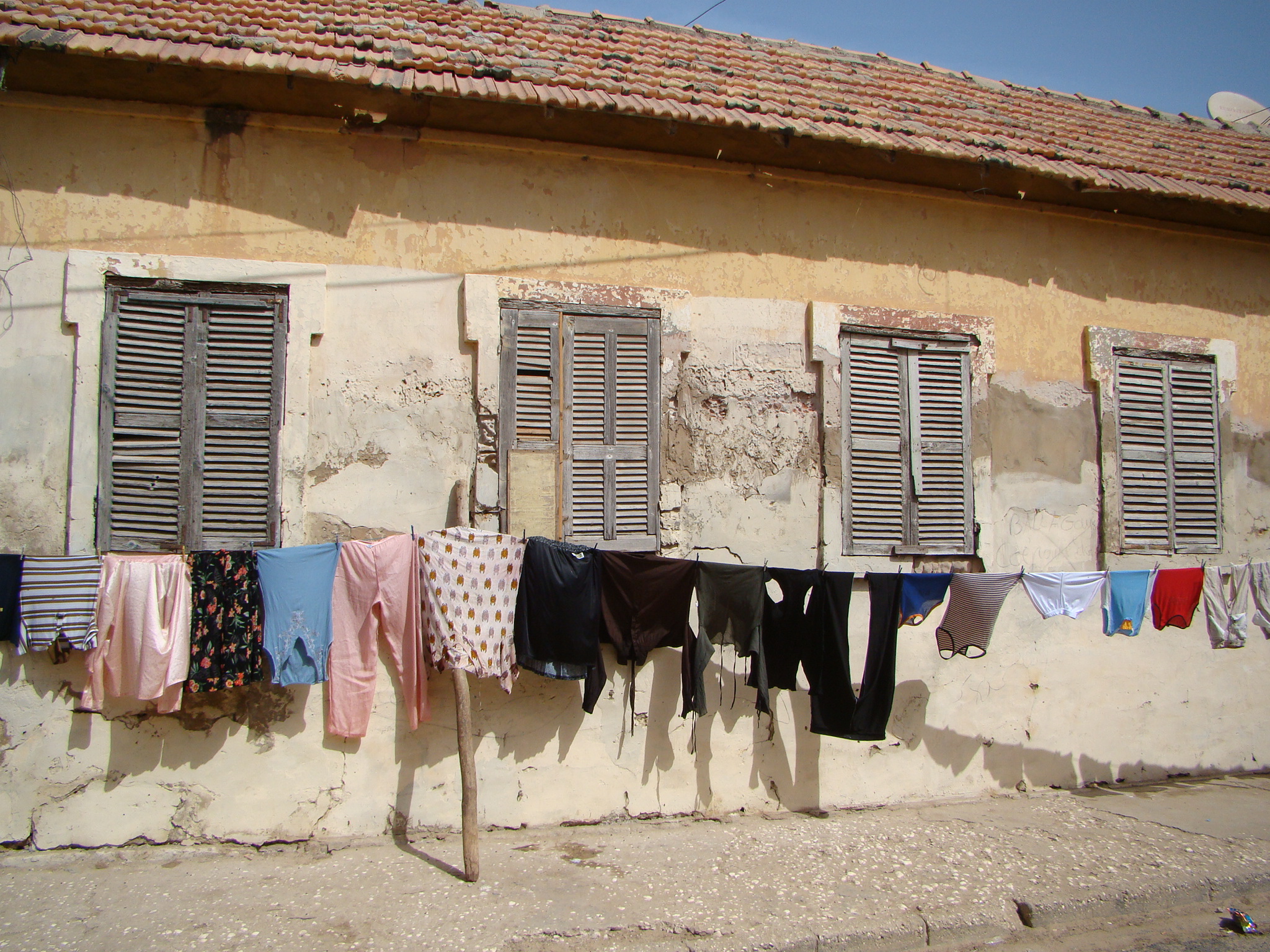 On Saturday morning we set out for a weekend long adventure planned by our friends Philippe and Charlotte. On the itinerary were Lompoul’s Sand Dunes, a pit stop on the water near Gandiol and the northernmost city of St Louis – which all sounded fascinating. We left fairly early due to traffic and made it to Lompoul about 4 hours later. Getting out of Dakar and its immediate suburbs was an adventure in it of itself. Once again the road was buzzing with commerce, all types of vehicles (overloaded buses, cars, motorbikes and street vendors). Bumper to bumper traffic for the first hour is putting it lightly.

As we finally reached the countryside, the landscape was mainly dry (and sandy) but filled with these amazing looking trees called “baobab trees” (they have a corklike bark that is fire resistant and can store hundreds of liters of water, and their leaves are used for medicines and condiments – some baobabs have been proven to be over 2,000 years old). We also saw tons of animals: goats, donkeys, horses, sheep, birds (hawks and vultures), dogs and even a couple monkeys! At one point, we stopped at some roadside shops and checked out the local hand-made woven goods – baskets, bowls and other arts and crafts. Philippe and Charlotte bought a few things, while Brigitte took a bunch of pics and I engaged with two little boys in juggling a soccer ball. All I could think was that it was hot outside, really hot as in 100+ degrees fahrenheit and these ladies selling goods and their kids are out in this sun all day every day (it really makes you appreciate air conditioning). Although the moment you step in the shade it feels 20 degrees cooler…

A couple of hours later we arrived at the village of Lompoul where we met up withour driver. The dunes were about 10 minutes away by car which typically required a 4X4 vehicle. So we jumped into the back of Suleiman’s pick-up truck and made our way down the sandy road. This was a really cool experience, to take in the African landscape and all of the sudden to come upon the massive dunes – exhilarating! It felt as if we had just entered a surreal landscape.. this is the kind of stuff you typically see in Nat Geo, bright blue skies complementing the fiery clay-colored dunes, simply breathtaking. And this was just the beginning of this magical experience.

Next we checked out our accommodations which were these awesome tents (about 2 feet off the ground) standing about 12 feet tall at the apex. Inside were beds for 4 people, moroccan rugs and a couple of oil lamps for the night. Each tent was also equipped with its own bathroom (sink, shower and toilet), outside and fenced in (no ceiling so it felt very open – which was cool but also a little concerning as neighboring tents were only feet away). More on this later.

The dunes were tempting us in the middle of the afternoon but it was simply too hot to be in the sun. So Brigitte and I ventured upon them a little later that afternoon and once again for sunset with Philippe and Charlotte. This experience will stay with me forever. There was definitely an element of surrealism in being completely surrounded by monster dunes and only being able to see either the sky or the sand (all this in the middle of nowhere with no civilization in sight). Apparently the 7th dune offered a view of the Atlantic Ocean which was only a few kilometers away. I think we may have actually made it close to the lucky 7th as we spotted what appeared to be crashing waves on shore (on the horizon). Watching the sunset was icing on the cake only to be fittingly captured by Brigitte’s pictures (pure magic!).

After sundown we made our way back to the campsite for dinner. On the menu was chicken couscous which was delicious. It was only fitting that we drank the local La Gazelle beer with dinner after a very hot day in the desert.

Going to bed in the tent was a first for me. I know, I know.. after working at Outside magazine for over 3 years you’d think I’d be a seasoned camper. It was pitch black inside the tent and the wind was howling, blowing in refreshing cool air that put us to sleep. Then maybe around 3 or 4am I woke suddenly and decided this was a good time to make use of the bathroom. Thankful to my sudden urge, I found myself gazing at the night sky in pure awe. The sky was completely speckled by what must have been millions of stars, I’d never seen anything like it. All I could think was: here we are in the middle of nowhere surrounded by sheer beauty day and night. As I made my way back into the tent I decided to wake Brigitte up so she could also see the night’s incredible sky.

The next morning we started making our way toward the city of St Louis but first we stopped in Gandiol (about 30 mins south of Saint-Louis) at the “Ocean et Savane” retreat for a dip in the Atlantic Ocean and the Senegal river. Access to Gandiol is via a dirt road surrounded by the water and nature reserves full of exotic birds. Apparently this is the first location of fresh water for many birds migrating south coming across the Sahara Desert.

This was a small piece of paradise amongst the arid countryside in the north of Senegal. This is also where we took our first “pirogue” ride across the estuary. The pirogue is the traditional fishing boat of Western Africa (nowadays it’s also used for transporting tourists). We traversed the lagoon and found ourselves at the “Campement Ocean et Savane” a beautiful tiny beachfront retreat with a very cool restaurant under a huge tent. All this was located on Langue de Barbarie (the stripof land separating the Senegal river from the ocean which was about couple hundred feet wide). Naturally we took advantage of both worlds and went into the Atlantic Ocean first which had a constant flow of waves and a strong current. The beach itself was only about 30-40 feet wide and access to it was via a 15 foot drop off a sand dune. The beach was completed deserted and from the top of the dune we spotted many crabs that ran away as soon as we descended upon their territory. Cooling off in the ocean was very necessary. Soon after it was just about lunch time.

We had some delicious chicken kebabs along with an amazing salad made with green papaya, mango, chives and pineapple (with a citrus dressing). One of our bestmeals so far! Tons of little yellow birds (Black-headed weavers) were flying all around us in search of crumbs so I offered them a few small pieces of bread. After lunch we all grabbed a beach chair and enjoyed the beautiful and peaceful view of the Senegal river. Before departing from this little paradise Brigitte and went for a dip in the river only to find ourselves surrounded by hundreds of tiny flying fish (they were literally within reach not only from us but also their predators). Every now and then a few of them would jump out to the surface and “leap” across the water. On a few occasions we saw some of them get snatched up by their larger predatory brethren.. being surrounded by endless natural beauty and rich wildlife served as a nice reminder of why we wanted to do this trip.

Our day at Gandiol ended at 5pm when we took the pirogue back to the mainland and then drove north for Saint-Louis. The former capital of the French colony of Senegal is situated near the mouth of the Senegal River (and lies on an island 2 kmlong and 400 meters wide – similar to Manhattan its streets are lined perfectly parallel as in a grid). Saint-Louis also served as the capital of neighboring Mauritania which was also under French colonial rule until 1960 (same as Senegal).

The city rose to its prominence during the French colonial era however it later lost most of its luster after the decolonization period during which many companies, merchants and offices closed or relocated to Dakar. It’s a city that remained suspended in time and this is clearly evident just by walking down its streets. Speaking of its streets, there are clear remnants of beautiful architecture and buildings similar in style to places like New Orleans and Havanna. Parts of the city are being renovated which is much needed as the majority of buildings appear to be run down. However this aspect really adds to the city’s character and aesthetic appeal.

One of Saint-Louis’ characteristics that is still very much alive and kicking is its rich music culture. The town is well known for some of its local artists and venues, and luckily for us we got here during the Jazz Music Festival. A blend of jazz mixed with Afro beats poured into the streets from several venues setting the tone for the evening. On our walk around town we stopped at the Institute Francais to hear a few songs – the place was jam-packed and everyone was feeling the music with great exuberance.

To top off the night we went for dinner at the Flamingo, a beautiful waterfront restaurant overlooking the Faidherbe bridge. We had a great view of the Senegal river – all of which went pitch black (what the?) at some point during dinner. Apparently blackouts are pretty common here but the Flamingo had a backup generator thankfully! Philippe and Charlotte had given us a heads up on this so it was just a matter of time before it happened.

After dinner we made our way back to our bed & breakfast (Au Fil du Fleuve) which was amazing! Similar to a Moroccan ryad it had a small courtyard and it was open to the air. The common dining/lounging and kitchen area was very modern and chic and comprised of numerous pieces of local art. Brigitte and I had the pleasure of enjoying the very awesome newlywed suite courtesy of Philippe and Charlotte (merci bien!).

The next day we drove back to Dakar and relaxed a bit before going to dinner at La Calebasse. The place was great (serving local fare) and offered a great view of the ocean.